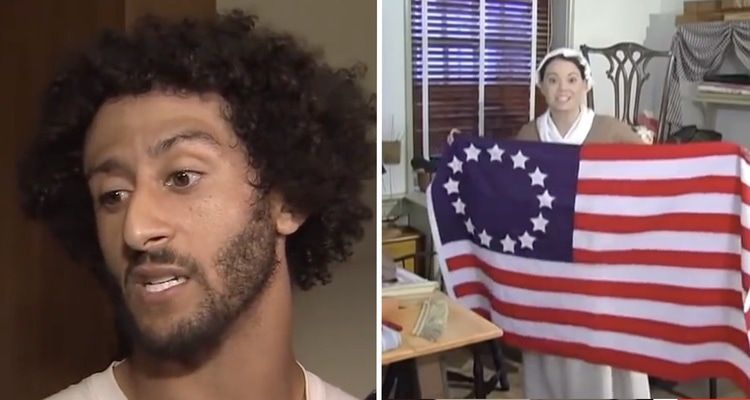 The concept of Woke Capital is the idea that corporate America is enforcing left-wing cultural beliefs and repressing conservatives, because nationalism is the true threat to the oligarchy, not the consumer socialism being pushed by the Democrats.

Sometimes, you get an example of Woke Capital in action so perfect that you just can't make it up.

Just don’t do it.

That was the message ex-NFL quarterback Colin Kaepernick delivered to Nike over the planned release of a USA-themed sneaker, which featured a Betsy Ross flag on the heel, according to a report.

Nike nixed the released of the Air Max 1 USA after having already sent the sneakers to retailers because the protesting quarterback said he felt the use of the Betsy Ross flag was offensive and carried slavery connotations, sources told The Wall Street Journal.

Citing people familiar with the matter, the Journal’s report stated: “After images of the shoe were posted online, Mr. Kaepernick, a Nike endorser, reached out to company officials saying that he and others felt the Betsy Ross flag is an offensive symbol because of its connection to an era of slavery.”

It's important to remember that many leftists say situations like this literally cannot happen. Capitalists, we are told, support nationalism, support the military, even support racism. It's all part of a plot to "divide the working class."

Yet in the real world, the greatest force for Open Borders is global finance.

On this specific issue, the whole point of Colin Kaepernick's protest is that the current American flag and anthem is also associated with racism. So what difference does it make whether it is the revolutionary flag or not? Wouldn't shoes that just feature the American flag be just as bad?

The American Right is simultaneously trying to defend patriotism and corporations. Over and over again, it seems like the nation loses out to the Chamber of Commerce. Tech companies deplatform conservatives. Banks refuse to do service with immigration law enforcement. Shoe companies declare the flag offensive.

What do we hear about at the Conservative Political Action Conference? Saving hamburgers from the socialists.

The Trump campaign should have showed that Conservatism Inc. is losing touch with its own base. It didn't. President Trump himself seems to have learned many of the wrong lessons.

Yet there are larger forces of history at work. Corporate America and patriots can't remain in the same party much longer. The main problem is not the "socialists." It's Woke Capital.