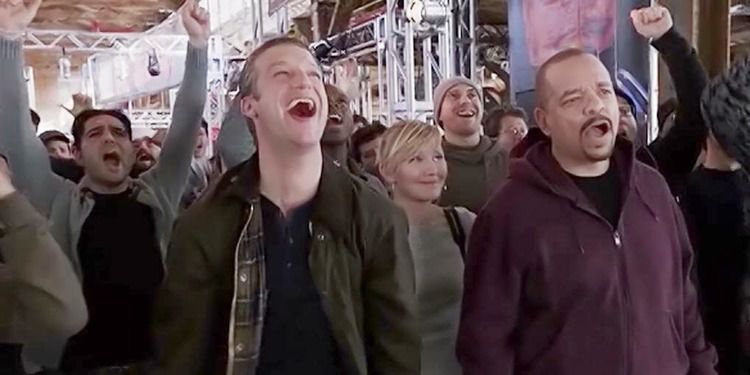 There’s little that can be said about last night’s episode of Law & Order: SVU with a straight face.

“Intimidation Game” is quite possibly the worst hour of cop drama I’ve ever watched. I’d say “worst hour of television ever” but that’s too bold a claim.

As far as TV about video games go, however, this takes the cake. I’ve never felt so insulted after watching TV before, and not just me: the show manages to insult everybody, from the gamers it takes on to the police to women in video games and, perhaps worst of all, victims of actual sexual assault.

So A Female Game Developer Walks Into A Gaming Convention

Let’s get through the recap as quickly as possible:

Wasn’t that roughly the name of some of Ice-T’s raps back in the early 1990s?

… when, nearby, a couple of Icky Gamers approach a woman at a game booth and tell her very loudly that she’s not wanted there because she’s a girl.

I’ve been to gaming conventions. They really do shine a light on the gender divide in gaming. For instance, there are far fewer games journalists and game developers there who are women, but quite a few women working in PR and at booths (we won’t even touch on “booth babes.”)

But as far as I know, at these relatively calm and peaceful gatherings of gamers, nobody is vocally shouting down women. You generally don’t hear dudes shouting “Bitch!” at the screen either. …

Herein lies the weird dynamic when it comes to discussing “white male privilege” and video games. Sure, a lot of gamers are white and male, but they’re also the butt of endless jokes and cultural mockery.

Anyways, these two Icky Gamers sexually assault the same girl in a bathroom stall just a few minutes later in a weirdly empty bathroom for such a crowded event. She’s discovered by the female SVU detective who asks her what they did to her.

“They leveled up,” the sexual assault victim says, though how the actress pulled off that line with a straight face is beyond me.

One thing leads to another and pretty soon SVU has uncovered a Serious Terrorist Organization of some sorts, made up of gamers who can’t tell the difference between games and reality and want both women and social justice out of gaming. Yes, we hear this sort of thing on Twitter. Social Justice Warriors are the enemies of many in the so-called #GamerGate movement. This has yet to reach ISIS levels of terrorism outside of the inflammatory tweets of some industry insiders.

So these gamers kidnap a high profile female game developer, Raina Punjabi, during her game launch (for her fictional Amazonian Warriors RPG, which is a non-violent game because of course women who play games don’t like violence!) …

Evil gamers in masks kidnap Punjabi, post videos of her being assaulted, make her confess to all sorts of horrible things—here it’s very much Gamers Are Worse Than ISIS territory—and many, many bad one-liners are uttered. It’s embarrassing and awful and wonderfully bad all at the same time. It’s the Reefer Madness of our generation.

Finally, SVU’s writers just go ahead and basically steal a scene from the Fargo show, before ending with a rooftop shootout.

P.S. Instead of watching this garbage, take a couple hours out of your day to watch Wreck-It Ralph. It’s quite possibly the best film ever made about video games, and has a great cast of both male and female characters. Seriously, this is how we should be thinking about video games—as something positive and wonderful. Not as this hateful dreck.