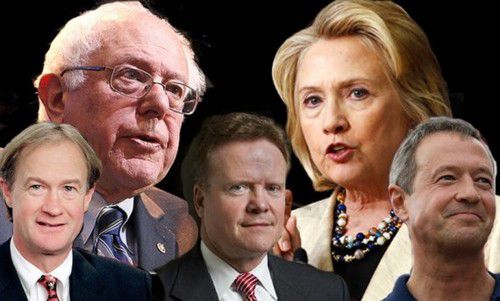 Just as the Spirit of Rome supposedly would appear in their dreams to quit doomed Emperors, so the exact moment when the historic link between the Democratic Party and the American working class snapped can be pinpointed (10:15 PM Tuesday) in the CNN debate:

JUAN CARLOS LOPEZ: Senator Webb, do you support the undocumented[sic] immigrants getting Obamacare? WEBB: I wouldn't have a problem with that. The CNN Democratic debate transcript, annotated, Washington Post, October 13, 2015

#JimWebb has no problem with illegals getting ObamaCare. He's over. #DemDebate

But the redoubtable Ann Coulter, who had been cheering Webb on, beat us by seconds:

Okay, Webb just lost my vote. He "wouldn't have a problem" with illegals getting free health care. GO TRUMP, GO!

Of course, the revelation that Democrats want to force American taxpayers to subsidize their own demographic dispossession is not generally a surprise. The candidates scrambled to outbid each other in showering benefits on “undocumented immigrants”—even Bernie Sanders, who at one point showed qualms about an “Open Borders” policy because of its impact on American workers, completed his ignominious clichéd collapse into pandering (“My view right now—and always has been—is that when you have 11 million undocumented people in this country, we need comprehensive immigration reform, we need a path toward citizenship, we need to take people out of the shadows”).

But it is a surprise, or at least it’s significant, in the case of Jim Webb.

I should stipulate at this point that I’ve known Webb for more than 35 years, since we were both (Republican) staffers on the Hill and I contacted him because of my admiration for his great Vietnam War autobiographical novel Fields of Fire. (How come it never became a movie?) Even back then, his peers talked about Webb as a future presidential contender because of his obvious abilities, courage, academic achievements and legendary war record.

I should further stipulate, because I don’t want to get him into trouble, that we’ve had no political conversations for at least a decade, certainly since he began his awkward transition back into the Democratic Party—people forget that, from a blue-collar Southern background, he was a convert to Reaganism.

I will also say that in my personal experience, and contrary to the widespread impression, he’s actually nice. (Of course, that’s also my experience of Donald Trump).

Without revealing details of our conversations long ago: whereas immigration patriots are often all too aware that immigration enthusiasts have absolutely no conception that opposing viewpoints exist, I am certain that Jim Webb does know they exist—even if he now chooses to disagree with them.

You can see this implicitly in the rest of his answer to Lopez’ question:

Let me start by saying my wife is an immigrant. She was a refugee, her family escaped from Vietnam on a boat— her entire extended family, after the communists took over, when hundreds of thousands of people were out there and thousands of them were dying. Went to two refugee camps, she never spoke English in her home, and she ended, as I said, graduating from Cornell Law School. That's not only American dream, that's a value that we have with a good immigration system in place. No country has—is a country without defining its borders. We need to resolve this issue. I actually introduced an amendment in the 2007 immigration bill... LOPEZ: ...Thank you, Senator. WEBB: ...Giving a pathway to citizenship to those people who had come here, and put down their roots, and met as a series of standards... COOPER: ...Thank you, Senator. WEBB: ...lost— I introduced that in 2007—We need a comprehensive reform, and we need to be able to define our borders.

Webb here conflates legal and illegal immigration in the approved Democrat/ Main Stream Media style, and talks about the notorious “pathway to citizenship” (with “a series of standards” that of course will never be enforced).

But note that he does also say “we need to be able define our borders”—ironically, an echo of Reagan’s 1983 comment: “This country has lost control of its borders. And no country can sustain that kind of position.” [Reagan pledges support for stalled immigration reform bill, By Richard L. Strout, Christian Science Monitor October 21, 1983]The other Democratic candidates gave no sign of acknowledging that a nation-state needs borders, or for that matter should exist at all. And this unfortunate insight can hardly have earned Webb any points with Democratic activists. But he said it anyway.

There’s even stronger evidence of Webb’s suppressed deviationism in this exchange about Affirmative Action (a.k.a. quotas). Tellingly, Webb was the only contender asked about this key neosocialist offensive:

ANDERSON COOPER: Senator Webb, in 2006, you called Affirmative Action "state-sponsored racism." In 2010, you wrote an op/ed saying it discriminates against whites. Given that nearly half the Democratic Party is non-white, aren't you out of step with where the Democratic Party is now? WEBB: No, actually I believe that I am where the Democratic Party traditionally has been. The Democratic Party, and the reason I've decided to run as a Democrat, has been the party that gives people who otherwise have no voice in the corridors of power a voice. And that is not determined by race. And as a clarification, I have always supported Affirmative Action for African Americans. That's the way the program was originally designed because of their unique history in this country, with slavery and the Jim Crow laws that followed. What I have discussed a number of times is the idea that when we create diversity programs that include everyone, quote, "of color," other than whites, struggling whites like the families in the Appalachian mountains, we're not being true to the Democratic Party principle of elevating the level of consciousness among our people about the hardships that a lot of people who happen to be have—by culture, by the way…

Readers may judge by following the hyperlinks whether Webb has actually “always supported Affirmative Action.” But his argument that it should only be applied to “African Americans,” and his criticism of “diversity programs that include everyone, quote, ‘of color,’ other than whites,” unmistakably reveals he thinks quota preferences should not be extended to include Hispanics, Asians or, especially, recent immigrants.

Of course, it is indeed utterly absurd and outrageous that immigrants who have no history of being disadvantaged in the U.S.—and who anyway chose to come here—should receive quota preferences above absolutely all American whites, regardless of those whites’ circumstances. The logic of this position has been amply documented by VDARE.com: for example, here

But this absurdity has been clear for more than twenty years. My much-denounced single (1) reference in Alien Nation to my son Alexander’s blond hair and blue eyes was exactly in the context of this paradox: white Americans are squeezed out by immigrants who happen to fall into the politically-favored “protected classes,” as Alexander manifestly does not. It’s also clear by now that the American Left positively demands the power to discriminate of favor of its clients, against whites (and Republicans are too stupid and cowardly to oppose them).

And yet Webb, however fleetingly and inadequately he expressed it, does not agree. And, again, he said so. This was certainly not because he felt trapped by his record—he had next to him at the podium far grosser examples of flip-flops (or “evolving,” as the MSM calls switches in a Leftward direction), like Hillary Clinton on homosexual marriage. He said it because it’s what he thinks.

But despite all this, even Jim Webb felt unable to defy the other Democratic candidates’ monolithic consensus lauding immigration, both legal (which was unmentioned) and illegal (which was fawned upon).

Exactly 23 years ago, in the wake of my National Review “Time To Rethink Immigration” cover story, Jack Miles wrote a long article in The Atlantic concluding that, if the immigration debate were really beginning, “…it will begin on the right (immigration was the cover story in the June 22 issue of National Review) but quickly be seized by the left” because of immigration’s impact on American workers and on blacks. [Blacks vs. Browns, October 1992].

(For an example of the debate that actually did begin in the 1990s, before being brutally aborted, see Miles’ very reasonable review of Alien Nation [The Coming Immigration Debate| An Englishman takes an alarmed look at a quintessentially American issue, The Atlantic, April 1995]).

There was every reason for Miles to think this. Mass immigration clearly does affect American wages and displace workers, and blacks are particular victims. Moreover, the First Great Wave of immigration was brought to an end in the 1920s in large part precisely because of the resistance of organized labor, notably led by the American Federation of Labor chief Samuel Gompers. Many individual liberals and union members are aware of problems with immigration: some of them write for VDARE.com

But in fact, 23 years later, the immigration issue has not been “seized by the Left.” This fact provides further proof of Sean Trende’s brilliant perception that, whereas the GOP is a coalition of ideological factions dominated (alas) by an interest group, the Democrats are a coalition of interest groups dominated by an ideological faction—identity-politics Cultural Marxism.

And if even Jim Webb—with his explicit emphasis on the working class, with nothing to lose and everything to gain—has been scared off, it now seems safe to say that the American Left will never seize the immigration issue.

Which is not to say that many of its individual members won’t be voting for President Trump.