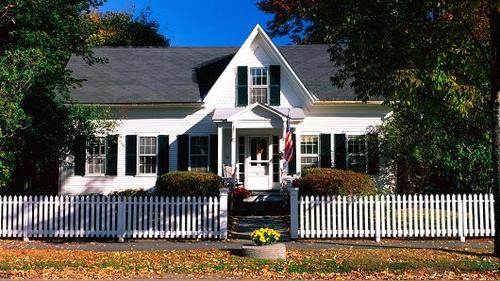 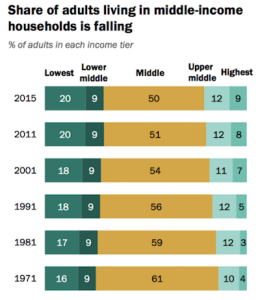 A Pew study (The American Middle Class Is Losing Ground) released on Wednesday found that the number of Americans living in a middle-class household had fallen to below half.

That’s a major event, because America is supposed to be a middle-class nation, not like backward countries such as Brazil where the great majority of people are poor and are ruled by a powerful rich oligarchy. Now America is looking more and more like a banana republic.

Americans are losing the belief in the nation’s capability to generate prosperity for average people, and in fact, according to a Harvard poll showing that nearly half of young people don’t believe in the American Dream of possibility and prosperity.

There was a burble of interest around the Pew report, from CBS (video below) to Rush Limbaugh, who opined that Americans “look to Washington and they see the country being undermined” — even including immigration as part of the problem in his remarks.

Perhaps the study will be discussed in next week’s GOP Presidential debate.

As I pointed out in my 2014 Social Contract article about economic globalization, Three Stakes in the Heart of the American Dream, decades of mass immigration and outsourcing have battered US workers, and now automation is coming on strong to wipe out even more jobs. This nation once had a sizable blue-collar middle class, fueled by jobs in manufacturing and meatpacking, until outsourcing and immigration largely destroyed it.

On Sunday, the Fox News business reporter Maria Bartiromo pointed out the automation angle to the lost middle class story:

TUCKER CARLSON: It turns out the American middle class is melting away; it was not your imagination: now no longer in the majority. A brand new study finds middle-class Americans make up just half of our population. That’s down from 61 percent in 1971.

CLAYTON MORRIS: So while many want to blame the rich for the growing disparity, wasn’t the Obama administration’s policy supposed to help the middle class? Joining us now with her reaction is the host of Sunday Morning Futures, Maria Bartiromo. So break it down for us. What’s happening and why are they being so squeezed?

BARTIROMO: A couple of things are happening right now. First of all you have a complete breakdown in the manufacturing side of the economy. I mean, that has to do with a number of things not necessarily policy only, but commodities, oil is down fifty percent, iron ore, steel, copper — these are all the things that are industrial metals that are used to build houses and build cars. That area of the economy is in recession right now, partly because of China, partly because the economy is completely changed in terms of jobs. I mean, if a company can do something through automation, robotics — they will do it. And unfortunately the manufacturing jobs in particular have been taken out by technology. So technology is part of this.

Here’s a report from earlier this week:

Middle-class families, pillar of the American dream, are no longer in the majority, study finds, Los Angeles Times, December 10, 2015

The nation’s middle class, long a pillar of the U.S. economy and foundation of the American dream, has shrunk to the point where it no longer constitutes the majority of the adult population, according to a new major study.

The Pew Research Center report released Wednesday put in sharp relief the nation’s increasing income divide, which is certain to be a central issue in the 2016 presidential race. It also highlights how various economic and demographic forces have eroded long-held ideals about maintaining a strong, majority middle class.

Many analysts and policymakers regard the shift as worrisome for economic and social stability. Middle-income households have been the bedrock of consumer spending, and many liberals in particular view the declining middle as part of a troubling trend of skewed income gains among the nation’s richest families.

Median-income voters, particularly non-college-educated men, are also at the core of billionaire Donald Trump’s surprising surge in the Republican presidential campaign. His supporters’ sense that their once-secure middle-class standing is in danger of slipping appears to be fueling much of the anger against the government and immigrant groups.

The tipping point for the middle class occurred over the last couple of years of the recovery from the Great Recession as the economy continued to reward highly educated workers, well-to-do investors and those with technical skills.

Rapid growth of upper-income households, coupled with an increase in less-educated low earners, has driven the decline of the middle-income population to a hair below 50% of the total this year, Pew found. In 1971, the middle class accounted for 61% of the population, and it has been declining steadily since.

The Pew research found that the shares of upper-income and lower-income households grew in recent years as the middle shrank — with the higher-income tier growing more. In that sense, the nonpartisan group said, “the shift represents economic progress.”

Pew defined middle class as households earning two-thirds to twice the overall median income, after adjusting for household size. A family of three, for example, would be considered middle income if its total annual income ranged from about $42,000 to $126,000. Pew analyzed data from the Census Bureau and the Labor Department, as well as the Federal Reserve.

Most Americans have traditionally identified themselves as middle class, even those at the top and bottom, reflecting a kind of cultural heritage tied to the American dream of self-reliance. But the Great Recession and subsequent slow recovery have shaken that image.

A Gallup survey this spring showed that just 51% of U.S. adults considered themselves middle or upper middle class, with 48% saying they are part of the lower or working class. As recently as 2008, 63% of those polled by Gallup said they were middle class.

This change in self-identification — and the reality of the shift documented by Pew — carries political ramifications as the state of the middle class continues to be a major focus of the economic debate in the presidential campaigns, with candidates, in time-honored fashion, invoking the middle class in their speeches and policy statements. President Obama has dubbed his programs “middle-class economics.”

Patrick Egan, a politics professor at New York University, says the Pew findings and the Gallup surveys suggest that the public may be more open to policies of redistribution.

“Americans are always kind of reluctant to embrace open class warfare,” Egan said. But “if more Americans are under the idea of placing themselves at the bottom, you’ll see politicians follow.”

Although the median incomes of upper, lower and middle tiers have all lost ground since 2000, primarily because of the Great Recession in late 2007 to mid-2009, upper-income households saw the smallest decline through 2014, the Pew study found.

Pew’s findings add to strong evidence that the middle class has been thinned partly by a decline in manufacturing due to competition from imports as well as a broader polarization of jobs that has favored the most educated and technically skilled workers.

Elizbeth Espinoza and her husband, Carlos Arceo, both 38, fall squarely in the middle class, according to Pew. The Downey couple, who have two children, ages 4 and 6, gross about $110,000 between them, not counting benefits, such as healthcare insurance. By Pew’s definition, a household of four is in the middle tier if total income is $48,347 to $145,041.

But Espinoza, who works as a student programming coordinator at the UCLA Labor Center, sees her family as barely straddling the middle class. The reason: high living costs, including $850 a month for child care and hefty student loan payments.

“I’m on the border of middle class, and I feel this way because I feel like being part of the middle class means being comfortable financially, and I think we struggle with that,” Espinoza said. “When you look at that expense-to-income ratio, it’s just a lot more difficult to have that comfortableness.”

Espinoza said that she and her husband were hopeful about their future incomes rising, but she doubts that they can move up to the upper-income tier. “I feel like upward mobility keeps getting harder and harder,” she said.

The Pew study did not address economic mobility — an issue that many economists believe is more important than the change in income distribution. But research on income mobility across generations has found the U.S. as a whole lags behind other Western countries.

The declining middle also reflects demographic shifts, such as the arrival of more low-skilled immigrants, which can be seen in the overall slippage of Latinos in the income ladder since 1971. By race, black adults made the biggest strides in income status from 1971 to 2015, although they are significantly less likely to be middle income compared with adults overall.

At the same time, the increase of women in the workforce since the early 1970s has tended to boost household incomes, as has higher college education enrollment. And of course, strong gains from stocks and high-tech ventures have fueled incomes for some.

In contrast, the share of American adults in the very lowest income category — a three-person household making less than $31,000 — rose to 20% of the U.S. adult population this year from 16% in 1971.

“The distribution of adults by income is thinning in the middle and bulking up at the edges,” Pew said.

Whether this trend continues will depend in large part on how household structures evolve. Soaring numbers of single-parent households since the early 1970s, for example, have increased those at the bottom of the income spectrum.

Also, trends in marriage rates, immigration, college education and the labor force participation of lower-skilled men in particular will all have a bearing on the future of the middle class in America, said Harry Holzer, an economist and public policy professor at Georgetown University.

The Pew findings, however, are not comforting, he said. “It does suggest, even when you adjust for demographics, it’s a little troubling,” Holzer said. “We always expect things to be getting better.”