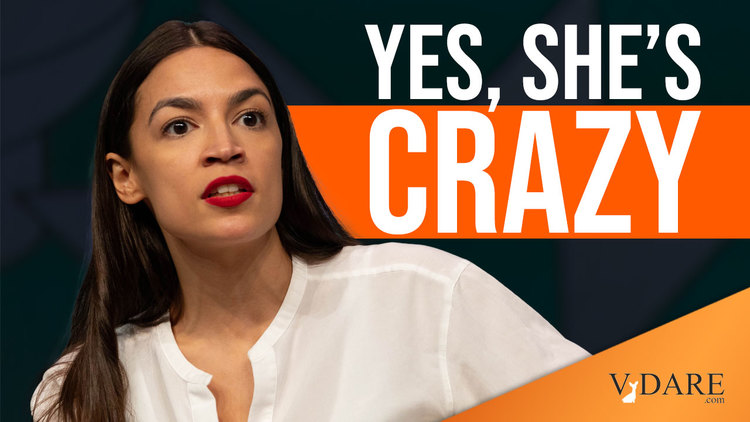 Yes, AOC Is Crazy. But So Are Her Democrat Colleagues

Rep. Alexandria Ocasio-Cortez is so neurotic, paranoid and self-absorbed that she recently tweeted that Senator Ted Cruz (of all people) tried to have her “murdered” on January 6th. N.B.— “Her,” specifically. And she’s only prepared to work with GOP members who “aren’t trying to get me killed.” 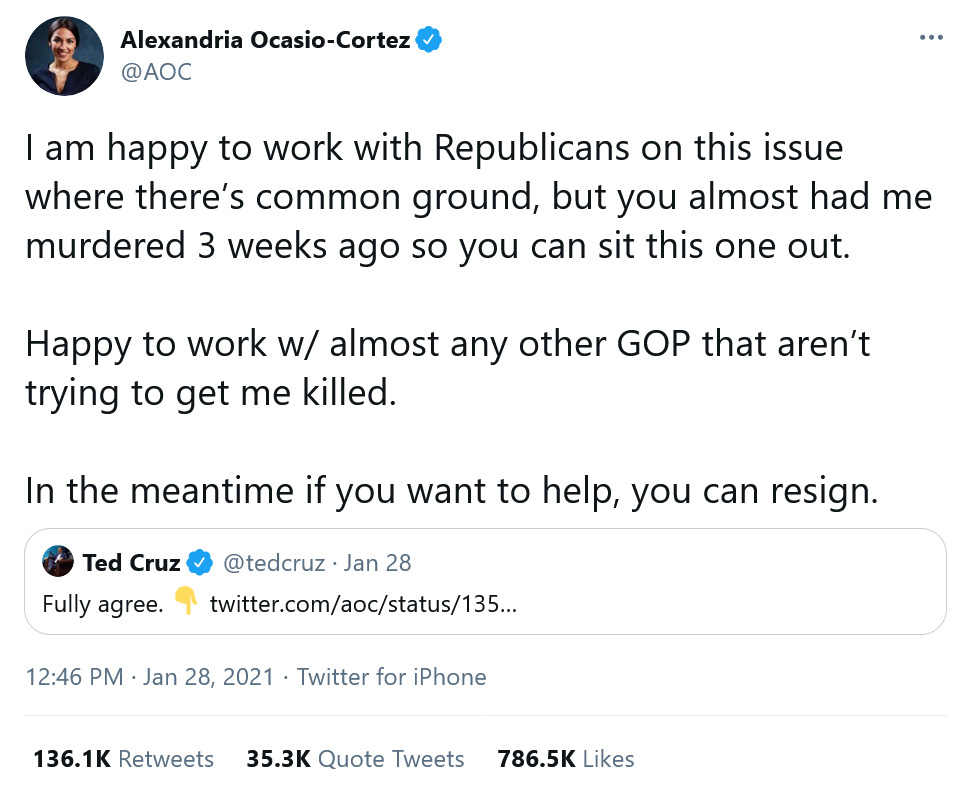 As the influence of extreme Leftists like AOC over American culture becomes ever more obvious, it is reassuring that increasing numbers of scientists are prepared to investigate the hypothesis—that seems clear from everyday observation—that Leftists are mentally unstable, self-righteous Narcissists.

I reported in the fall that liberal Americans are less able to regulate their emotions than conservatives and are more resistant to empirical evidence that challenges their dogmas and I’ve also reported the association between virtue-signaling and Narcissism in American samples. Well, two new scientific studies have presented yet more proof of the psychopathology of the mob that has now taken power.

European Leftists are apparently just as mentally unstable as our own. A study published in the academic journal Party Politics drew upon the large scale “European Social Survey” and a British survey (the UKHLS) to explore the relationship between party identification, voting intention, whether you identified as “left-wing” or “right-wing” and measures of self-rated clinical depression and depressive symptoms [Depression and political predispositions: Almost blue?, by Luca Bernardi, June 9, 2020]. The study, by Luca Bernardi of Liverpool University in the UK, replicated the other studies I have been reporting. It found that people who are vulnerable to depression are less likely to identify with conservative parties, they are less likely to vote for them, and they are less likely to place themselves on the “right of the political spectrum.”

Bernardi’s summary: depressive types seem to have a “bias against the right.”

In other words, depression is specifically associated with wanting a society that is more left-wing—which, as defined by psychologist Jonathan Haidt, means less hierarchal, more equal, more individualist, with little regard for group loyalty, and deeply concerned with the avoidance of harm and upset to individuals [Liberals and Conservatives Rely on Different Sets of Moral Foundations, by J. Graham, J. Haidt & B. Nosek, Personality Processes and Individual Differences, 2009].

So, there is now a great deal of evidence that mental instability predicts a Leftist worldview. But what about an extreme Leftist worldview—in which you believe that it is okay to use violence to achieve your utopia of equality?

I have already reported that virtue-signaling—the kind of people who want others to know how “liberal” they are—is associated with Machiavellianism (obsession with power) and with Narcissism (a strong sense of entitlement and of your own importance). In a society where the culture is controlled by the Left, this is unsurprising as it creates an arms race to showcase your Wokeness. Those who are power-obsessed and who believe they deserve high status are, therefore, more likely to do this in order attain the status they crave.

However, even separate from virtue-signaling, a study by two Australian psychologists, using a sample of 511 US residents suggests that extreme liberalism is associated with the so-called Dark Triad traits of Narcissism, Machiavellianism, and Psychopathic personality [The Dark Triad traits predict authoritarian political correctness and alt-right attitudes, by Jordan Moss & Peter O’Connor, Heliyon, 2020].

The researchers divided between two kinds of Political Correctness:

This is contrasted with

So, PCLs are your typical Woke herd members whereas PCAs are the kind that will take to the street and push things in an ever more Woke and chaotic direction. They are the stereotypical BLM protestors.

The study also looked at what it called the “Alt-Right” or “White Identitarians” (WI). These were marked by “strong feelings of white identity, solidarity and a belief in white victimization.”

Correlating scores on measures of these political perspectives with Dark triad traits, the authors found only a very weak, trivial, relationship between PCL and Dark Triad traits. In fact, on psychopathology there was a significant negative relationship, presumably because people who are altruistic and rule-following (so not psychopaths) like to get along with everyone and please people, so they persuade themselves to adopt the dominant political perspective.

By contrast, both PCA and WI were significantly, and sometimes quite strongly, associated with Dark Triad traits, to roughly the same degree. To the extent that there was a slight difference, PCA tended to be higher in Narcissism while WI were prone to be higher in psychopathology. (Reassuringly this might suggest that White Identitarians are less crazy, because they have only one Dark Triad trait, not two. The Far Right are not Narcissistic, which is associated with Neurotic traits, and not Machiavellian).

This might be explicable in terms of the different aspects of psychopathology and Narcissism. One possible explanation is that PCA ideas are highly individualist—if you believe you are female, then you are—which is attractive to Narcissists, and Narcissists also like adoration, which they can easily attain by being super-Woke.

But to be a White Identitarian in the current political climate, you have strongly to not care about what most people think of you, you have to like breaking the rules, and you have to be attracted to chaos and danger. So, we can begin to see why WI types might be slightly more psychopathic, though PCA still score much higher in psychopathology than PCL, as PCA are happy to use violence and intimidation and have an obvious sense of their own superiority and importance.

Also, the authors’ measure of White Identitarian was, essentially, a belief in anti-White conspiracy. This might attract psychopaths, as they tend to see others as manipulative and selfish, just as they are. But a different measure, such as a desire simply to preserve the White race, might have yielded different results.

Still, together, these studies show again that Leftists are mentally unstable and extreme Leftists are psychopathic and, in particular, Narcissistic.

As is obviously the case with AOC, extreme Leftists think the world revolves around them. A group of Trump-supporters protesting in the Capitol must, surely, be trying to kill them—because nobody is more important than they are.