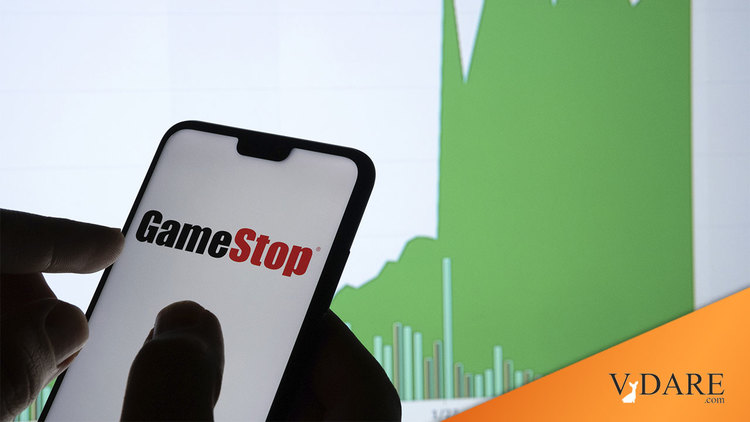 Gamestop: Everything That Challenges The Establishment's Rule Must Be "White Supremacy"

Everything the neo-liberal establishment doesn’t like is “white supremacy.” Kind of funny how the actual supremacists have weaponized accusations of white supremacy as a way to roll roughshod over any threat to their power, but it’s effective so they do:

This unprecedented mania, the ultimate in blow off tops, is a Trump residual, you see:

This time, amateur investors decided to revolt against the pros. Using Reddit — and a subreddit known as r/wallstreetbets — the amateurs began a coordinated effort of buying GameStop stock to drive its price higher and higher. (It’s worth noting that Reddit was also a gathering spot for some of the most ardent Trump supporters in 2016.)

It’s always been about Trump and it must always be about Trump. Surely you don’t expect us to learn to code, do you? Skip to 19:52 in this podcast to hear from Jake Tapper. It’s a little cumbersome but it’s worth it.

The insurrectionist and his nazi followers are behind everything bad and in the way of everything good. Progressives, you don’t want people to think you’re defending Nazis, do you? That’s right, tell the people how much you love Janet Yellen. Tweet it again. Oh yeah, that’s the stuff.

This is why they really, really want Kamala Harris at the top. Any criticism of her is a gross violation of Woke sensibilities.

This may be an inflection point in the realignment. If progressives will side with hedge fund billionaires over the Reddit rabble who managed to momentarily beat the oligarchs at their own game, they’re hopeless. But many of them don’t want to. If there is ever a chance for the populist right and populist left to look up instead of glaring across the room at one another, this is it. For the right’s part, this is the time to follow dfordoom’s advice and point out the power and class dynamics at play, not obsess over the ethnic ones. To make progress with the left, come at things from the left.