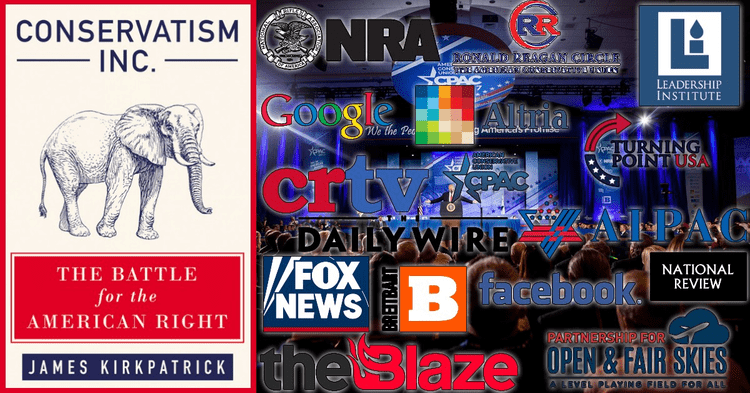 VDARE.com’s James Kirkpatrick, Conservatism Inc. And The Holocaust Of The Alt Right

[VDARE.com Editor Peter Brimelow writes: What follows is adapted from my Preface to VDARE.com’s James Kirkpatrick’s just-published Conservatism Inc.: The Battle for the American Right, which you can buy direct from the publisher here or from Amazon here. (Remember, though, that the swine at Amazon have cut VDARE.com out of their Associates program, with the result that we no longer receive a commission.) The book also has an Afterword by John Derbyshire, so this is quite a VDARE.com family affair.

Kirkpatrick in his book focuses on the struggle between the degenerate Beltway Right—“Conservatism Inc.”—and insurgent American patriot forces, which he witnessed at first hand. But in my Preface, I took the opportunity to vent my rage that this outstanding young VDARE.com contributor is actually forced, as the MSM falsely claims about illegal aliens, to “live in the shadows”—and that so many of his contemporaries from what used to be called the Alt Right have suffered through an extraordinary unreported personal and professional—yes!—Holocaust after Trump’s 2016 election. (Since writing this preface, I have learned of at least two suicides.)

I saw the best minds of my generation destroyed by madness, starving hysterical naked,
dragging themselves through the negro streets at dawn looking for an angry fix...

Of course, this was ridiculous rubbish. The counter-culture that Ginsberg personified was in fact eagerly embraced by America’s intellectual Establishment and he himself was inundated with honors by the time he reached middle age.

In contrast, however, I actually have seen a generation destroyed, or at least beaten to the ground—not by “madness,” but because it told the truth.

It’s not my generation: I am, alas, a Boomer. (I never liked them. I think my twin brother and I are the only Boomers who never smoked marijuana).

And it is, in fact, two generations—I’ve seen so many individuals from both Generation  X (mid-1960s-early 1980s) and Millennials (early 1980s-early 2000s) marginalized, silenced, their careers, even in completely non-political areas where their professional performance had never been impugned, nevertheless destroyed because they dared to question the Politically Correct Narrative—above all on race and immigration, my particular concern as Editor of VDARE.com.

This is a Reign Of Terror far more serious, and much longer lasting, than the much-denounced phenomenon of “McCarthyism.” Senator Joseph McCarthy gave his famous Wheeling WVA speech about Communist subversion in 1950: He was censured by the Senate, generally regarded as the end of his career, in 1954.

In contrast, this Reign Of Terror has been rising for decades—I believe that it dates to the late 1960s and the Ruling Class’s imperative need to repress mounting evidence that the egalitarian assumptions of the 1964 Civil Rights Act were disastrously wrong. And it has dramatically intensified, especially via corporate Cultural Marxist censorship of the internet, in reaction to President Donald J. Trump’s upset election in November 2016.

Moreover, unlike Ginsberg and his groupies, the victims of this new Terror are not perverts, druggies and Communists. They are, generally, family-oriented tax-paying patriots. America’s auto-immune system has turned on itself.

James Kirkpatrick, whose work is celebrated in this volume, is widely regarded, by severe judges, as the most brilliant political writer of his (Millennial) generation. You have never seen him interviewed on network or even cable television, profiled in the prestige press, invited to address a college commencement (a significant but unspoken slush fund for the Left), or receiving a MacArthur Genius Grant. In every respect, he is the opposite of Conservatism Inc.’s Ben Shapiro or, needless to say, the Main Stream Media’s Alexandria Ocasio-Cortes. Once a rising figure in the Beltway Right, he has for some years now lived in prudent obscurity (see Reign Of Terror, above). Nevertheless, to the extent that the civilization of the West survives, and even revives, it is his name that will be remembered.

Most of the articles in this volume first appeared in VDARE.com, which I edit. From an editor’s point of view, Kirkpatrick is a godsend. His intense pieces seem to be written in a sort of Dionysiac frenzy, taking remarkably little time from commission to filing, arriving essentially letter perfect. His only flaw: a tendency to despair, which is (as he should know) enjoined by Christian theology. But in his case, and in the case of his generation, it’s understandable…if, from my battle-scarred Boomer perspective, premature.

Reading this volume, I find myself deeply moved by Kirkpatrick’s account, original to this volume, of his personal experience of Trump’s November 8, 2016 victory:

Casually endangering my own life and the lives of around me, I kept lurking on /pol, posting on VDARE’s Twitter account, and refreshing the vote counts while speeding around heavy northern Virginia traffic. Of all nights, I was somehow able to secure a parking spot near the [Trump] hotel….

To be on the “far right” when young is to doom yourself to being a Cassandra. You know, and you accept, that your prophecies will go unheeded…Thus, there was a sense of unreality at the moment of victory. It was the culmination of that magical, literally magical feeling that had been building over the past year, that certain laws no longer applied, that a new era had begun, Novus ordo seclorum. The resistance from within the conservative movement had been so fierce, and the hysteria from the leftists so unlimited, that it was similarly easy to imagine that “we” had just taken power, in the same sense as if we had marched on Rome or seized the Winter Palace. Maybe I’d be running an office in the Department of Homeland Security under Kris Kobach. Maybe he’d shut down the antifa networks nationwide. Maybe Peter Brimelow would give the keystone address at CPAC next year! Anything seemed possible.

Kirkpatrick, in his gloomy way, contrasts this moment to the Trump Administration’s subsequently unfulfilled (as yet) promise. But it reminds me of another poem, G.K. Chesterton’s The Donkey:

Fools! For I also had my hour;
One far fierce hour and sweet:
There was a shout about my ears,
And palms before my feet.

It needs only to be added that the donkey’s hour, however isolated as it may have appeared, was in fact just a precursor to the rise of the greatest civilization in the history of the world.