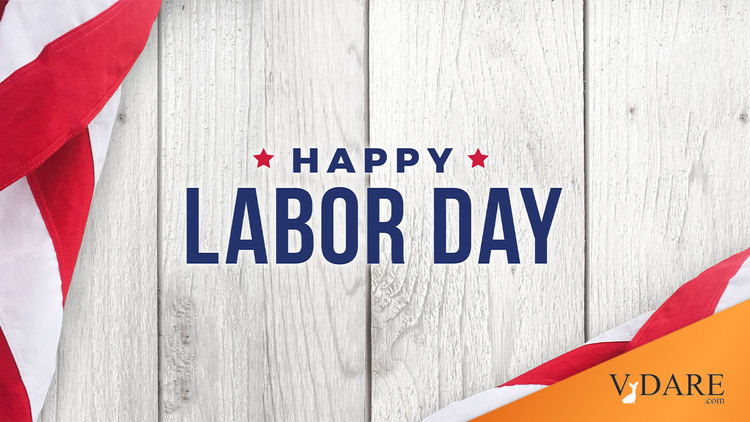 It is now twenty (20!) years that I’ve been writing Labor Day columns for VDARE.com. My first, at the bottom of the list below, is titled Happy (Fairly Priced) Labor Day! That gets to the point of Labor Day: It’s about the American worker, the man the American Federation of Labor founder Samuel Gompers (an immigrant himself from England) wanted to protect from cheap foreign labor.

Some previous highlights, emphasizing how both parties—before Trump, anyhow—weren’t even pretending to protect the American worker:

2007—The fact that old school labor leaders thought immigration was a way for capitalists to lower wages will be familiar to anyone who’s read VDARE.com Editor Peter Brimelow’s 1995 book Alien Nation. I wrote:

Labor leaders of the past have regularly opposed mass immigration. You may be familiar with a class of ethnic joke, which I believe is now capable of getting you fired from your job, that would start something like this: "An Englishman, an Irishman, and a Scotsman," but might  also include a Mexican and a Jew.

Well, today's history lesson includes four labor leaders—Samuel Gompers, Dennis Kearney, Cesar Chavez, and A. Philip Randolph—who might, if they went into a bar together, feature in that kind of joke.

They were drawn from several different American communities. But they all objected to the idea that the American working man was replaceable by cheap foreign labor.

2011—Obama, a black, pro-immigration President was bad for his fellow black Americans—and for white Americans, of course! I wrote:

Black unemployment is staggeringly high. Partly because blacks are less employable on average, partly because of the "shrinking public sector"—Federal, state and local governments all hire a lot of African-Americans, and all American governments are running out of money.

And the U.S. Armed Forces, traditionally considered the employer of last resort, is making harder to get in (higher standards, no waivers for criminal records) or stay in—enlisted personnel are being let go if they're not promoted, owing to a hardening of the "up or out rules." This will have a disparate impact, and tend to make the Armed Forces whiter than they already are.

So, Happy Labor Day! (Assuming you still have a job.)

2012—There was a prospect of replacing Obama, but would GOP nominee Mitt Romney be any better, I asked?

The question we need to ask is "Will Romney be any better?" Will there be any jobs in Romney's America?  In his convention speech, Romney was saying he'd produce, magically, 12 million jobs. [Romney: America needs jobs, lots of jobs By David Espo and Robert Furlow August 31, 2012 6:55 am]

In fact, America already has "jobs, lots of jobs"—what it has is too many foreign workers, legal and illegal. Is Romney willing to remove some of the millions of illegal workers? Probably not. That would be racist.

How about cutting legal immigration? Is Romney willing to do that? Probably not. That would be bad for business.

No Jobs For Labor Day In ROMNEY'S America, Either? September 3, 2012

Note: We never got to find out if Romney would be any better, because he lost. See Mitt Romney Was An Immigration WIMP, Dammit! from November 13, 2012.

2013—A recollection of a happier, less riotous time.

EPI wonders if the economic situation will “end in tears,” as VDARE.com Editor Peter Brimelow has put it:

Well, the answer to that is: it’s much more likely that the United States will suffer riots of the kind that rocked Brazil in June if it keeps importing the kind of people who do that kind of rioting.

But the Economic Policy Institute not only can’t say that for fear of getting “Derbed”—and losing its Liberalism Inc. funding—it can’t even think it.

That's what we at VDARE.com are here for! (And why we need your tax-deductible help).

Happy Riot-Free Labor Day to all our readers!

Happy Riot-Free Labor Day! —No Thanks To The Economic Policy Institute, September 2, 2013

2018—A President (Donald J. Trump) who ran on a program of restricting immigration had produced what cheap labor employers were calling a “shortage:”

In honor of Labor Day, here's a story from Josh Barro on how a "labor shortage" is good for American workers:

The coming 'labor shortage' in America is great news for workers

They say "labor shortage" like it's a bad thing.

"America's labor shortage is approaching epidemic proportions, and it could be employers who end up paying," CNBC reported this week. That was before yet another monthly jobs report showing solid growth in jobs and wages. …. [More]

But Barro’s article not only didn’t credit Trump, but it also didn’t even mention immigration. That’s because Barro [Tweet him] was a crazed Never-Trumper in 2016: Donald Trump is the ultimate tail-risk candidate, but voters aren't focusing enough on how risky he is,  Business Insider, May 31, 2016.

2020—Well, there were riots, but as indicated above, not by American workers per se so much as by Americans who don’t really have a tradition of working very hard. However, at that point in the Trump years, American workers had been winning the jobs race over foreign-born cheap labor. I wrote:

I’m no longer able to wish the US a “Riot-Free Labor Day.” But in 2020, the problem isn’t mass Latin American immigration. The recent riots are the result of the previous importation, between 1619 and 1807 of the ultimate in cheap labor—African slaves.

Slavery was and is an African custom which should never have been imported to the US. The reason for this importation, back in the day, is that Africa was (and is) the only place that people were for sale. But pre-Revolutionary planters could have found English or Scots immigrants to do the work—like the modern day U.S. Chamber of Commerce, they just didn’t want to pay them.

At the moment, American workers, especially those with what I may call “real jobs”—i.e., not sitting at a computer, like me, but moving, building, fixing, or actually doing something—are suffering from the lockdown. It’s been going on for quite a while: An earlier, non–Labor Day column was headed “Easter During Coronavirus: The Resurrection Of America Will Come” five solid months ago.

However, there is one bright side—immigrants are by and large not taking the jobs that are left…and there are fewer of them to take American jobs.

Labor Day 2020: Riots—But, Because Of Trump, The Immigrant Workforce Population IS Falling, September 6, 2021

What does the future look like for the American worker in 2021?

Well, the answer is: not good, under a Biden/Harris administration that is explicitly rolling back all Trump’s Executive Actions that were pro-American labor. The Democrats seem to think that favoring Americans is racist, somehow.

But also: better—because there’s no way Biden’s sorry performance will bring the Democrats success in the 2022 midterms. The Democrat legislators who support mass immigration and floods of refugees will find their jobs in peril.

There will still be plenty of work for us here at VDARE.com to do, that’s for sure!

“There is a great deal of ruin in a nation” said Adam Smith when Britain lost America at Saratoga, meaning that great nations can survive much in the way of losses.

Recent events have been testing this theory, but not to the breaking point.

We here at VDARE.com have a great deal of faith in America and the American worker. And we will continue to do so in the years to come.

Happy Labor Day—above all, if you don’t have a job to take time off from!