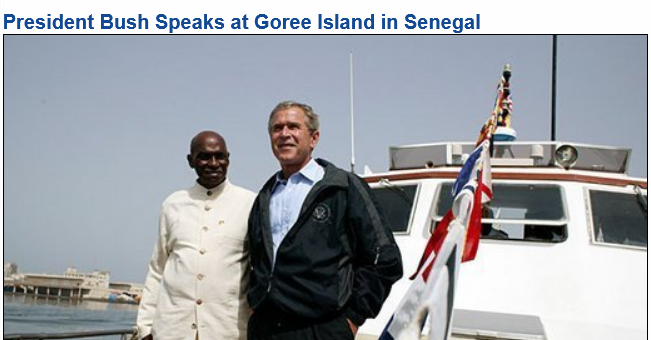 With American troops getting ready to liberate Liberia, the World Liberator himself descended upon the continent of Africa earlier this month to prepare the way. Antiquarians may recall that some years ago, President Bush's predecessor, Bill Clinton, also traveled to Africa and declaimed sentiments on slavery not very different from those emitted by the current Liberator this month in Senegal.

Mr. Clinton actually apologized for slavery to an African audience in Uganda, an abasement that even the president of Uganda thought a bit excessive. Mr. Bush didn't quite apologize, but he did wallow in the same moral pigsty of guilt and self-hatred as Mr. Clinton.

Touring a former prison for African slaves in Senegal, Mr. Bush enlightened his listeners with his astonishing display of historical erudition. "At this place, liberty and life were stolen and sold. Human beings were delivered and sorted, and weighed, and branded with the marks of commercial enterprises, and loaded as cargo on a voyage without return. One of the largest migrations of history was also one of the greatest crimes of history."

Readers will note that the president made use of the passive voice in this passage, a mode beloved of bureaucrats and defense attorneys for the reason that it effectively disguises responsibility for the action the sentence describes. Mr. Bush's language did not disclose exactly who it was at this place who stole and sold liberty and life or who exactly did the branding and the cargo loading. There's a reason for that.

The president's reliance on the passive voice was a clever way of masking that not only much of branding and cargo loading "at this place" in Senegal was done by Africans themselves but also a good deal of the actual stealing and selling. The truth Mr. Bush never mentioned in his dishonest remarks is that the slave trade would not have been possible at all without the help, encouragement and collaboration of Africans themselves.

Mr. Bush did not care to call attention to this truth because blaming Africans was not his purpose. His purpose was to blame his own country—not other Westerners who also engaged in the slave trade, such as the British, the French, the Spanish and the Portuguese, but Americans only.

"For 250 years the captives endured an assault on their culture and their dignity," the president whined. "The spirit of Africans in America did not break. Yet the spirit of their captors was corrupted. Small men took on the powers and airs of tyrants and masters. Years of unpunished brutality and bullying and rape produced a dullness and hardness of conscience. Christian men and women became blind to the clearest commands of their faith and added hypocrisy to injustice. A republic founded on equality for all became a prison for millions."

If Mr. Bush's speechwriters had been Lenin, Fidel Castro and Ho Chi Minh, they could not have produced a speech that better reflected their own views of America as a land of repression, racial tyranny, and brazen hypocrisy than what the president delivered in Senegal.

Nowhere in his speech denouncing his own country for what happened two to three centuries ago did Mr. Bush mention the present-day reality of slavery as it is practiced throughout the African continent, including Senegal itself. He said nothing about the kidnapping, trafficking, brutal treatment, rape, castration, and mutilation of millions of Africans today—not by Americans, Europeans, or any other white nation but by Africans themselves. What he did do was regurgitate lies about such "heroes of liberation" as "Mandela, Nkrumah, [and] Kenyatta." The two last were no more liberators than Saddam Hussein; Nelson Mandela accomplished little other than sitting in prison for 27 years for a terrorist conspiracy to which he freely confessed while his anti-white comrades turned him into a martyr of freedom.

Mr. Bush began his trip to Africa by perpetuating lies and insults about the past and his own country, as well as about Africa and Africans. He finished it by giving Zimbabwean President Robert Mugabe, the most (maybe) brutal tyrant in contemporary Africa, carte blanche to continue and intensify his tyranny. Meeting with Mr. Mugabe's buddy, South African President Thabo Mbeki, in Pretoria, Mr. Bush had nothing to say about the Mugabe regime and announced that Mr. Mbeki should be "the point man" on Zimbabwe. "I don't have any intention of second-guessing his tactics," Mr. Bush beamed. Mr. Mbeki, as well as Mr. Mugabe, can take that as a license for further repression.

What Mr. Bush thought he was accomplishing by his African trip is unclear, but the enemies of America and of whites and of freedom have every reason to thank him. No doubt they will welcome American troops in Liberia as much as the Iraqis do in their country.

[Sam Francis [email him] is a nationally syndicated columnist. A selection of his columns, America Extinguished: Mass Immigration And The Disintegration Of American Culture, is now available from Americans For Immigration Control. Click herefor Sam Francis' website.]