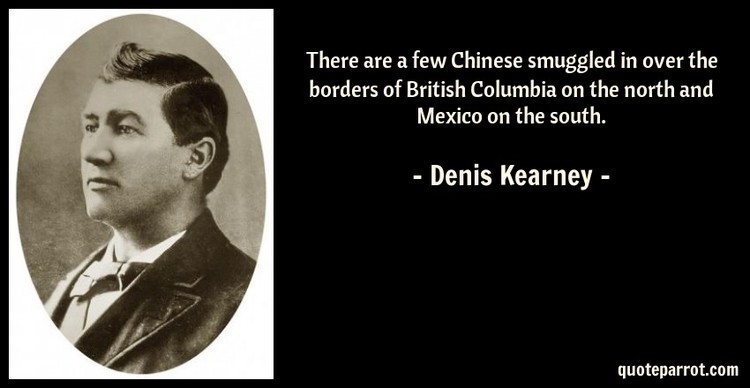 "[A]n Irish immigrant, Dennis Kearney, was a leader of the agitation that halted Chinese immigration into California. (His—probably mythical—slogan: 'Americay for Americans, Begorrah!')"

The point of that old joke is that Kearney was an "immigrant himself" as they're always saying about Peter Brimelow, John O'Sullivan, et cetera, and thus presumably had no business being "nativist."

I've discussed Kearney in two columns: Labor Day Lament: Where Have You Gone, Samuel Gompers, Dennis Kearney, Cesar Chavez, A. Philip Randolph? and Labor Day vs. Day Labor, and what you need to know about Chinese immigration after the Civil War is that it was huge, and the Chinese were displacing American workers at a tremendous rate.

American workers and patriots fought back, Tea Party-style.They won—California was not overwhelmed by Chinese, and was eventuallly mostly settled by Americans.

Kevin D. Williamson of National Revew has taken the occasion of   the recent Asian/Non-Asian minority kerfuffle in California (see Sailer's Chinese Outsmart Mexicans In Prop. 209 Struggle) to attack these deceased patriots of 1870 or 1908:

California has a long and ugly history of discriminating against Asian Americans. From the Anti-Jap Laundry League, the Anti-Chinese League, the Asiatic Exclusion League, the alien land laws, the Anti-Coolie Act . . . the list is long. Much of that discrimination had its origins on the left, with the Ant-Jap Laundry Act, the Asiatic Exclusion Act, and the Anti-Coolie Law being in the main projects of organized labor, which did not like the idea of being made to compete against Asians for work.[Return of the Anti-Chinese League | Dems want California’s universities to resurrect an ugly institution. NRO, March 16, 2014]

Well, the thing about the "Anti-Coolie Law" is that American labor, organized or unorganized, didn't want to compete with slave labor. "Coolie" means "indentured servant".

However, the main point about the recent anti-209 agitation is this—Steve Sailer said that

An  the proof of that is that, Williamson, a "mainstream" conservative, can't attack Affirmative Action, which is aimed at hurting whites, without going on a historical crying jag about whites' cruelty to Asians.