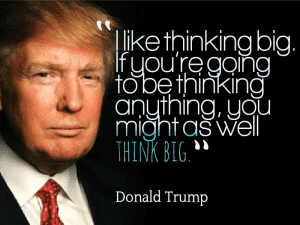 I learned about Trump's position paper when Mickey Kaus tweeted this:

Let me make that clear: the quote about "Mark Zuckerberg’s personal Senator, Marco Rubio" having a "bill to triple H-1Bs that would decimate women and minorities" is from Donald Trump's position paper:

Here are the three principles:

When politicians talk about “immigration reform” they mean: amnesty, cheap labor and open borders. The Schumer-Rubio immigration bill was nothing more than a giveaway to the corporate patrons who run both parties.

1. A nation without borders is not a nation. There must be a wall across the southern border.

2. A nation without laws is not a nation. Laws passed in accordance with our Constitutional system of government must be enforced.

3. A nation that does not serve its own citizens is not a nation. Any immigration plan must improve jobs, wages and security for all Americans.[More]

There's a lot more, and it's all good stuff.

Here's a reaction from Ben Domenech, who's sort of a Republican, and also sort of Hispanic:

Trump plan will be popular. Represents perfectly GOP portion that believes not in freedom but in identity politics for white people.

Here's one from Jennifer Rubin, the Washington Post's resident neocon/immigration enthusiast, who's technically a Republican, too:

Trump's immig plan doesnt actually call for rounding up illegals along with their families... hmm

No, current immigration law calls for rounding up illegals. (When Eisenhower did "Operation Wetback", he didn't have to pass any laws.) As for their families, Trump presumes they'll take them with them.

Here's one from Commentary Magazine:

Trump’s War on Legal Immigration a Tipping Point for the GOP - by @noahcrothman - http://t.co/jUuJUOzaqx pic.twitter.com/f893TnZUCC

Yes, it is. But not in the way you mean.

And a final one from Jennifer Rubin:

Trump's nuttiness reveals nuttiness of the Sessions-talk radio anti-immig crowd. Trump is wackier but they share his views

However, who also shares his views are large numbers of Republican voters, and for that matter, a majority of Americans of all parties...as the policy wonks at Vox were rather shocked to find recently:

The "most popular position was ... an outright moratorium on all immigration until the border is proven secure." http://t.co/SsI18jF3kw