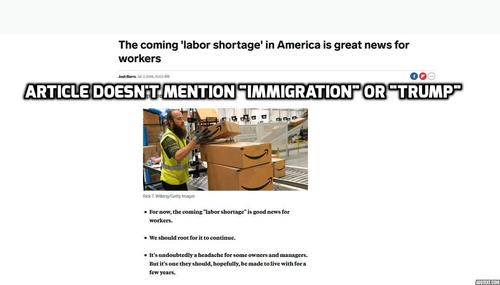 In honor of Labor Day, here's a story from Josh Barro on how a "labor shortage" is good for American workers:

The coming 'labor shortage' in America is great news for workers

They say "labor shortage" like it's a bad thing.

"America's labor shortage is approaching epidemic proportions, and it could be employers who end up paying," CNBC reported this week. That was before yet another monthly jobs report showing solid growth in jobs and wages.

I always find this framing to be backward. A "labor shortage" is good news: It means it's easier for unemployed people to find jobs, more appealing for people who quit the workforce out of frustration to get back in, and likelier that companies will decide they must pay higher wages to attract talent.

In theory, we could reach a point where upward wage pressure led to an inflationary spiral, with companies raising prices so they can afford to pay higher wages, and those higher prices eating up much of the wage increases. But we're far from that point, with corporate profits still high as a share of the economy.

For now, the "labor shortage" is very good news for workers, and we should root for it to continue. [More]

Query: why  doesn't this labor shortage article mention either "immigration" or the current President? Well, possibly because it's by Josh Barro [Tweet him] last seen here in 2016 when we quoted his unintentionally hilarious worries about “the risks of a Trump administration":

For example, he might mismanage the country's finances, needlessly inflame racial tensions, undermine the rule of law, confuse and antagonize our allies, and hurt the economy through erratic policies that punish and reward investors based on his political whims.

Donald Trump is the ultimate tail-risk candidate, but voters aren't focusing enough on how risky he is
Business Insider, May 31, 2016

Apparently when Obama did all those things it was invisible to Barro (although the race riots were hard to miss) and in the same way, when the current President  achieves a victory for American workers, it's equally invisible.