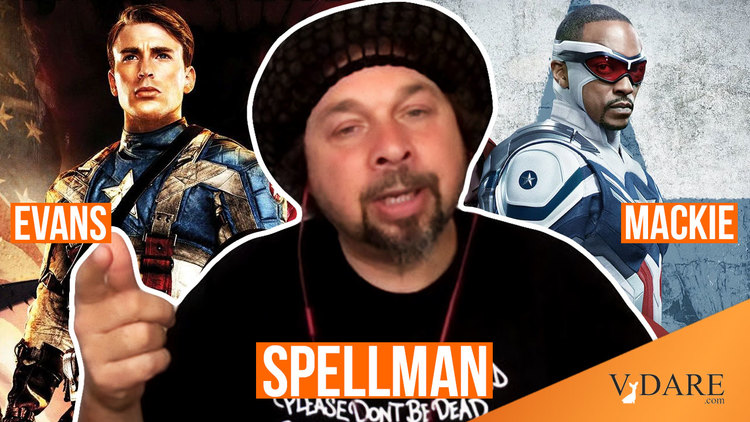 Previously: The Great Replacement Comes To Marvel. Out With The Normal White Men, In With The Gays And Black, Bisexual Women 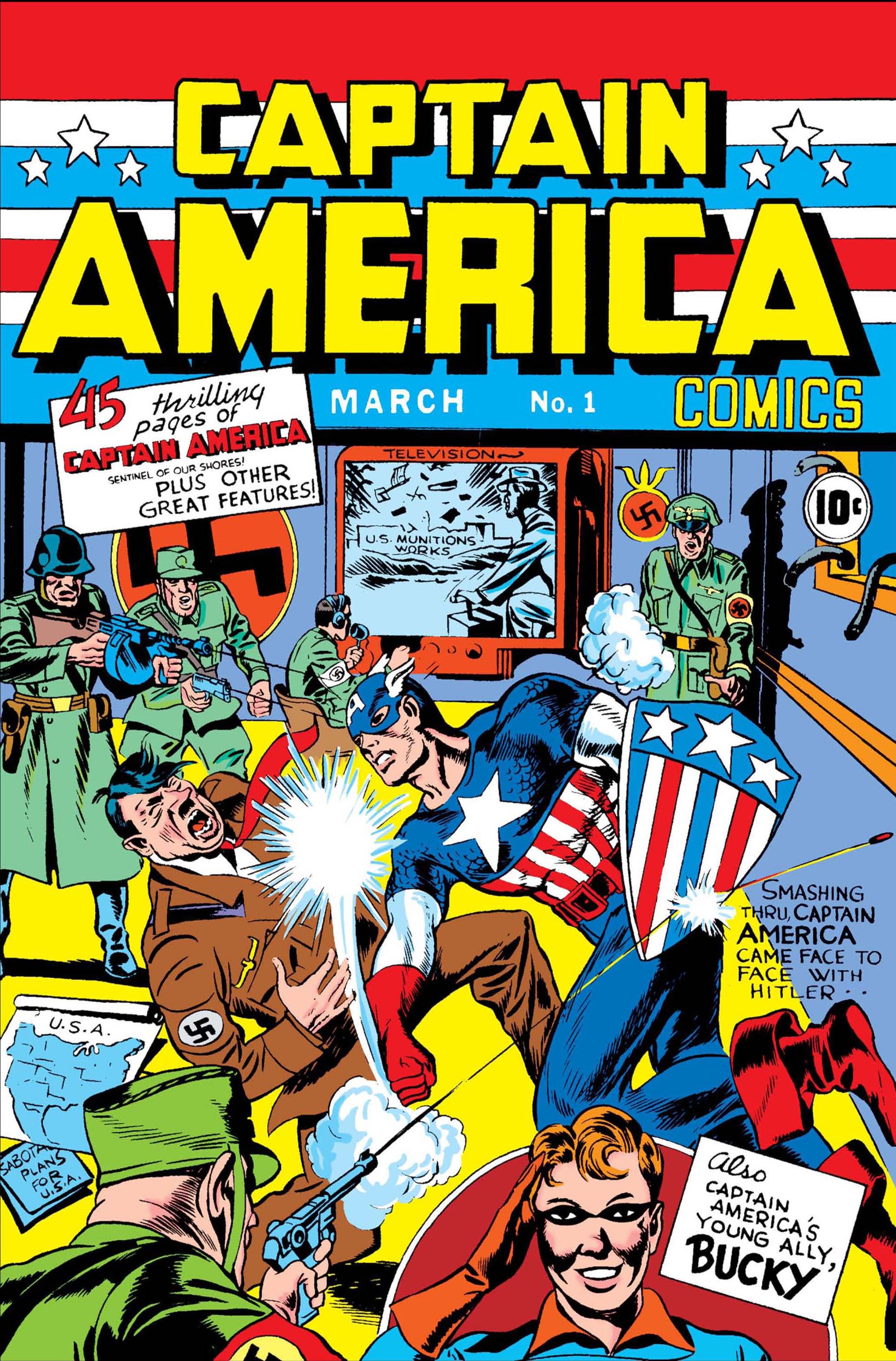 The Great Replacement will not leave anything created by the Historic American Nation untouched. That includes Captain America, the quintessential Historic American.  Two years after killing off the most important Marvel Cinematic Universe characters, the very white Captain America and Iron Man, in Avengers: Endgame, Disney plans a fourth theatrical release: Captain America 4. But now it will star black actor Anthony Mackie, also the lead in the Falcon and the Winter Soldier Disney + miniseries, where he was sort of a moral compass showing whites True North; i.e., how to internalize anti-white propaganda, and assist in their own dispossession.

Both projects are the creations of Malcom Spellman, who is half-black, half-Jewish and wholly anti-white: 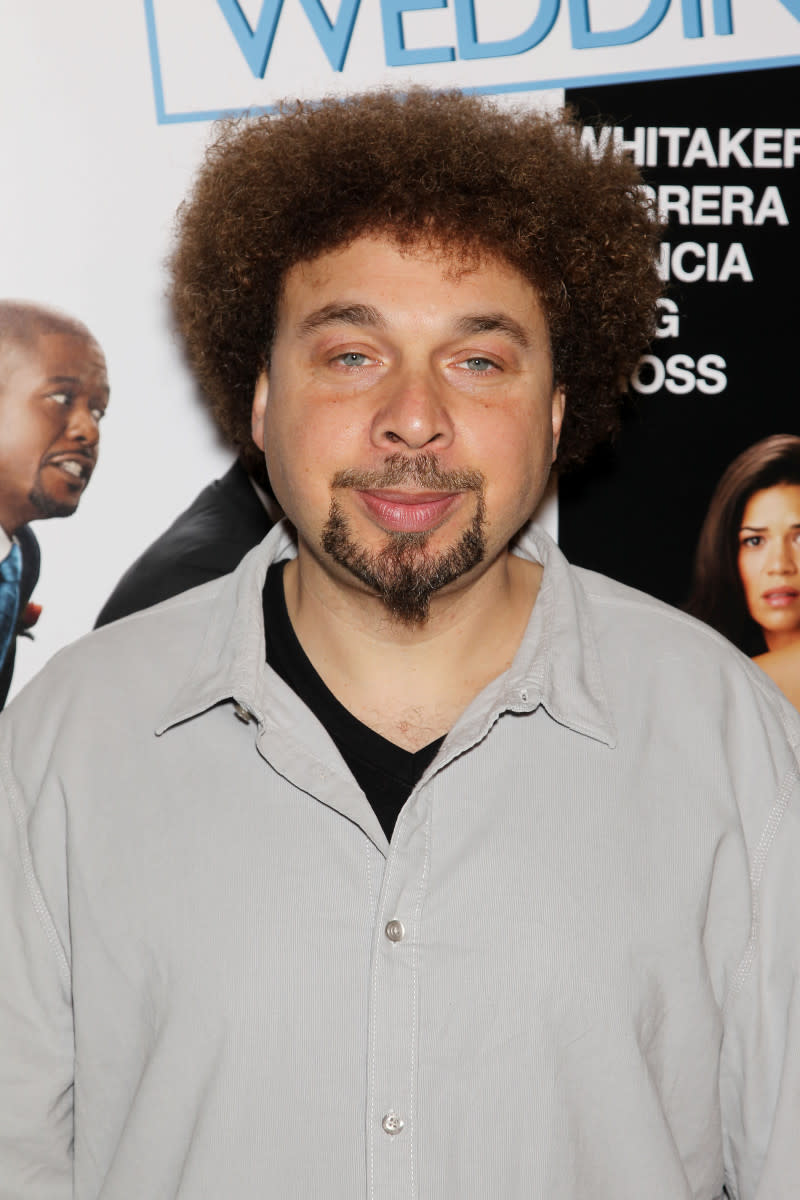 Falcon and the Winter Soldier, which also stars Sebastian Stan as Bucky Barnes, the Winter Soldier, has earned strong critical and fan reaction. It is nominated for five Emmys. [Malcolm] Spellman assembled a nearly all-Black writers room for the series, which has been praised for bringing the Black experience to the forefront quite unlike any other superhero film or TV show before it.

Chris Evan’s Steve Rogers, the last white Captain America, exited the role in Avengers: Endgame when he handed off his red, white and blue vibranium shield in a symbolically heavy-handed manner to Mackie’s Sam Wilson a.k.a. the Falcon, the first black superhero in the MCU. He had been introduced in 2014’s Captain America: Winter Soldier as Steve Rogers’ best friend. 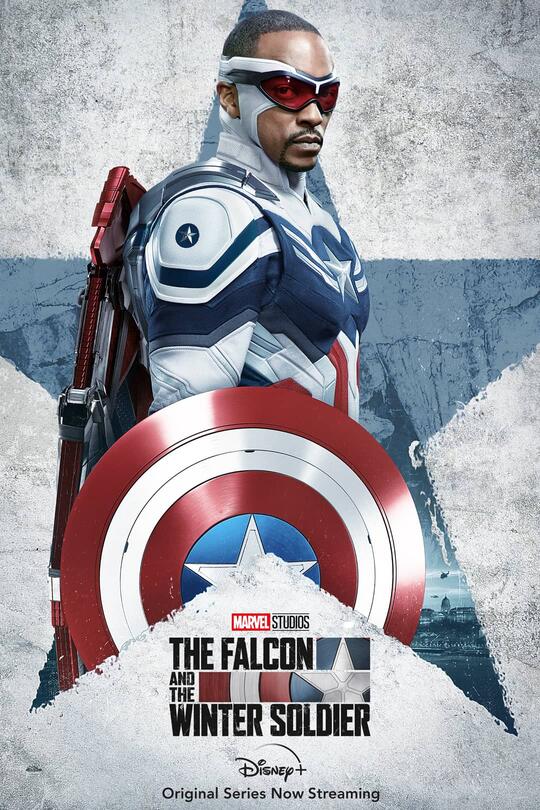 You see what the Left and its Main Stream Media Information arm have done. Pushing anti-white Critical Race Theory (CRT), the ideological toxin seeping into every public and private institution, they have weaponized pop culture. Even Captain America must lecture us about racist whites and America’s incurable injustice toward and oppression of “people of color.”

Consider this from Jason Johnson [email him], a black professor at Morgan State University, who praises MCU’s ‘What if T’Challa became a star-lord?,’ also on Disney+, as a “repudiation of mediocre white men,” but then offers this lamentation:

White men are bombarded with messages every day telling them they’re special no matter what they have or have not done or earned. How about a message to Black fans that is a bit more uplifting and less toxic.

Spellman’s Falcon and the Winter Soldier drips CRT’s not-so-subtle anti-white poison in nearly every scene. The show explicitly paints not just the previous Captain America but America itself as irredeemably racist.

“We wanted to hit it from two levels,” explained Spellman:

Number one is going to be the obvious insecurity or doubt you would have taking on the mantle of the center of the Marvel Universe, which is Cap. Steve Rogers has huge shoes to fill, but obviously the thing we really wanted to pursue was the doubt, wondering if it were even appropriate to take it on because he is a Black man — him specifically and not by accident — a Black man from the South who comes from a certain background, working class.

[Malcolm Spellman Discusses What It Means for a Black Man to Represent an Anti-Black America in ‘The Falcon and the Winter Soldier’ and More, by Danielle Broadway, Black Girl Nerds, July 2, 2021]

Thus does Falcon and the Winter Soldier introduce mesmerized viewers—undoubtedly mostly white kids and young adults—to Isaiah Bradley, a black man who received the same super-serum that turned Steve Rogers into Captain America. But white, World War II America doesn’t embrace him as it did Rogers—the personification of Middle-American heroism. Instead, Bradley is castigated for his actions in combat, then court-martialed, and sentenced to prison.

In other words, he’s supposed to be a stand-in for all blacks of the era, a victim of blind prejudice despite his obvious heroism. We’ve heard the storyline endlessly: blacks fought against injustice and tyranny overseas, then suffered them on returning home.

Thus, “Isaiah sternly warned Wilson that what happened to him could also happen to Sam because he believed the U.S. Government would never let a Black man be Captain America,” as John Orquiola explained at Screenrant. “Further, Bradley admonished Sam that "no self-respecting Black man would want to be Captain America” [Why Isaiah Bradley Is Okay With Sam Being Captain America Now, April 24, 2021. Emphasis in original].

The new black Captain America has Bradley around to constantly “remind him of the fact that America was founded on sins committed against people of color” [Captain America 4 Can Change The MCU In One Incredibly Grounded Way, by Richard Newby, Inverse, August 24, 2021].

In effect, the series is a Truth and Reconciliation program. The core subject matter is not vanquishing terrible supervillains, although they are certainly there. Instead, the real evil is whiteness.

That, of course, is one reason they must be replaced.

We see this not just in the MCU, by the way, but all over television. Roles for white men are drying up. Hollywood is a prime vehicle driving whites to accept The Great Replacement by replacing them in movies, on television, and everywhere else with people of color. You’re invisible now, whitey, get used to it:

One conundrum has kept cropping up in various genres and iterations: The white guys who used to be default protagonists on TV and in American life, all of the beleaguered dads, bad bosses, authoritative leaders, and wild-card mavericks, are no longer the main characters. So what happens to that guy now? Should he be erased? Can he be rehabilitated, his entitlement washed away? Where is he supposed to go?

After all, none of the shows simply jettison the white guy. They hold him close. They observe him, mock him, jab at him mercilessly. Even as he becomes a story’s central problem rather than its central character, there he still is in the middle of the narrative.

How long the MCU will turn a profit is, of course, unknown. Woke entertainment has a mixed record. Avengers: Endgame performed well at the box office. So did Captain Marvel, as I predicted it would because of the franchise’s (current) momentum, and the anti-white Black Panther. But other Woke or preachy ventures don’t do so well. Redtails, the largely fictional account of the Tuskegee Airmen, was a money-losing flop, as was the reboot of Ghostbusters, the gynocentric embarrassment that needed international box office sales to manifest in the black, and Terminator: Dark Fate, which literally Replaced the series’ previous storyline and made the heroine Mexican.

Profits regardless, MCU-Disney in particular and Hollywood in general will continue telling whites they are evil, that their ancestors were evil, and that everything their ancestors built and bequeathed to their posterity is also evil.

And they’ll keep sending that message using the very technology, and enjoying the very freedom to do so, that whites like the original Captain America gave them.

They won’t notice the irony.