On Labor Day, Good News For American Workers In Trump’s America—But Look Out For “DREAMers”! 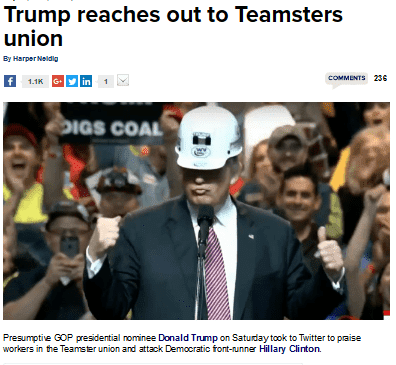 This is what I wrote last year on Labor Day:

Labor Day is meant to be a celebration of American workers. In the past, labor leaders like Jimmy Hoffa, Samuel Gompers, Dennis Kearney, Cesar Chavez, and A. Philip Randolph were very clear on that.

So, as you see [at left] is Donald Trump. [Trump reaches out to Teamsters union, By Harper Neidig, The Hill, May 7, 2016] However, the Democrats, the Main Stream Media, the Republican Establishment, and what’s left of the Organized Labor movement seem think that favoring American workers is wrong. The leadership of the Teamster’s Union, for example has endorsed Hillary. Actual Teamsters (mostly white male American workers) are likely to be voting for Trump.

That’s why, as Ed Rubenstein reports tonight, immigrant workers have been displacing American workers for the duration of both the George W. Bush and Obama administrations.

Trump (it’s easy to forget) subsequently won the 2016 presidential election with the help of the white working class, which the Clinton campaign had deliberately ignored.

We are seeing some good signs of a Trump Effect on American labor. One is from this NPR story, which points out that there are a lot of jobs out there for American workers, although employers haven’t quite adjusted:

Cappelli says another part of the problem is that employers haven't adjusted to new conditions. For years they've had their choice of workers desperate for a job. Now, the labor market has tightened, but many employers haven't responded, he says.

"Wages have not gone up despite all the talk about a tight labor market. And I think most important for the economy, we still don't see lots of employers being willing to take people in right out of school and train them for jobs," Cappelli says.

A tight labor market, with less immigrant competition, is the best thing for American workers—the economists who keep insisting that immigrants somehow don’t lower wages are simply denying the Law of Supply and Demand. (A much more anti-science stance than anything you can see on either side of the “global warming” debate.)

Also, according to Ed Rubenstein’s analysis of the latest job numbers (which we’ll publish after Labor Day) the Americanization of the American workforce under President Trump is real, and accelerating —the immigrant population is falling for first time since Great Recession.

However, there is one thing that does somewhat threaten young Americans looking for jobs—the presence in America of (at least) 800, 000 younger illegals (despite the propaganda, they’re not children) called DREAMers who were actually given work permits by Obama under the DACA pseudo-amnesty. These young illegals, mostly citizens of Mexico, are taking jobs Americans would do—if the jobs hadn’t been stolen, a point we’ve made repeatedly:

There has is some danger that Trump will allow himself to be talked into making the DACA pseudo-Amnesty permanent, although the people urging him to do so aren’t his, or America’s, friends:

During the election, Trump was talking up the obvious point that the people who should be having the “American Dream” are young Americans:

Hey, anybody remember what @realDonaldTrump said about "Dreamers" when he was appealing to voters, not the Swamp? https://t.co/jENTsFqSpK

This is why Donald Trump had so little trouble “displacing” Jeb Bush.

However, if Trump can’t find it in his heart to put American workers ahead of illegals, he may find himself “displaced” in 2020—although not, thank God, by anyone named either Bush or Clinton.

Below is our previous Labor Day coverage, going back to 2001—things are looking better in 2017.

On this Labor Day, lets hope that the President can do his job—and let American workers do theirs.