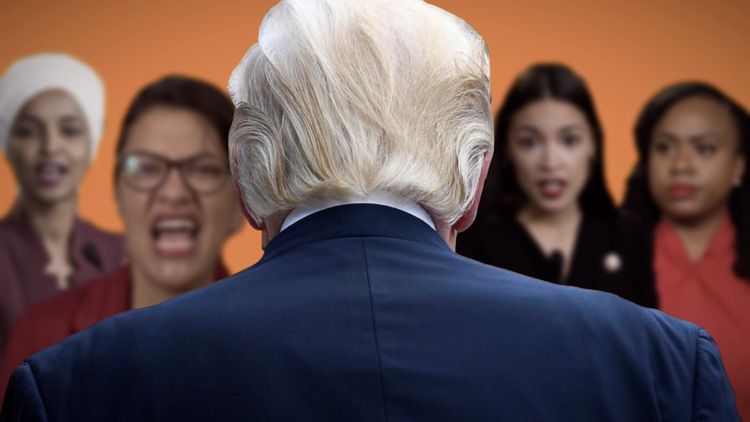 Say It, GOP!—Or Just Give It Up: Open Borders Is TREASON! The Left Is ANTI-WHITE!

Republicans still don’t know how to talk about race, identity and nation. Which is a problem, because, as an article in Axios recently bragged, “The single biggest threat to Republicans’ long-term viability is demographics.” [The GOP’s demographic decay, by Jim VandeHei and Mike Allen, July 18, 2019]

The repeating pattern: a Republican 1) says something 2) is accused of racial insensitivity 3) immediately grovels and offers concessions. The mostly white Republican base gets demoralized, the Cultural Marxist Left is emboldened, and the Overton Window shifts in the wrong direction.

In a desperate move, Republicans have lately been even trying to use support for Israel as a kind of proxy for white America—a strategy unlikely to work because Jewish organizations never reciprocate.

The solution is simple. But it requires a modicum of courage—one person with influence explicitly defending the right of Americans as Americans to defend their interests. For years, American leaders, including supposed “conservatives,” have been saying that anyone who believes in certain “ideas” is an American. Not surprisingly, current American political leaders are taking this to its logical conclusion and saying that America belongs to everyone in the world—not its citizens. As Rep. Alexandria Ocasio-Cortez recently declared, the country “belongs to everyone.”

But it doesn’t. It belongs to American citizens. And if American citizens can’t stake an exclusive claim to their own country, then they must admit they simply don’t have one anymore. And if that is the case, whites, like every other group, should collectively organize for their interests in this continental shopping mall masquerading as a nation-state.

Civic nationalists who didn’t want to give up on America fought for Donald Trump in 2016. He broke with the usual pattern of defensiveness—he didn’t back down when accused of racism. This simple defiance won him an early following best described as fanatical—memes calling him “God-Emperor” or the “Unstumpable” derived from his defiance of political correctness. Finally, there was someone with a platform whom JournoFa couldn’t control, and who didn’t collapse when journalists called him names.

One would think that Trump’s annihilation of the Republican field and subsequent victory in the general election would show the GOP that this was the way forward. But instead, Conservatism Inc. worked with the Main Stream Media to actually increase repression within the movement after President Trump’s victory. The Silicon Valley purges of Dissident Right and even “Alt Lite” personalities removed the financial and institutional basis for what could have been a new nationalist movement. Instead, we now get an apparently Israeli-run “National Conservative movement” that is plainly incoherent and serves as a gatekeeping operation rather than something designed to accomplish serious political goals. [Not The National Conservatism We’ve Been Looking For, by Andrew Kloster, The Federalist, July 22, 2019]

Donald Trump wrote in Art of the Comeback back in 1997 that he was “screwing people against the wall” who had betrayed him when he was down. Unfortunately, he doesn’t operate that way in politics. Most of President Trump’s top aides and White House officials opposed him during the primaries and those few who did support him were fired in response to MSM wailing. Not surprisingly, President Trump’s campaign promises have gone unfulfilled. [Trump has not built a single mile of new border fence after 30 months in office, by Anna Giaritelli, Washington Examiner, July 20, 2019]

But even President Trump’s so-called “extreme” statements don’t really express nationalist sentiments. Recently, he inspired calls of “send her back” directed at Ilhan Omar after he criticized her at a recent rally. President Trump disavowed his supporters, and then, later, disavowed the disavowal.

Lost in all of this is that the chants started after he accused Ilhan Omar of having a “history of launching vicious anti-Semitic screeds.” See for yourself:

Indeed, even now, President Trump still can’t strike back at his political opponents on Twitter without accusing them of being anti-Israel.

If he had said this about his own people and his own nation, he would probably have to resign.

Note that this has nothing to do with criticizing Israel. A better argument that Hawley could have made is that Israel provides a model for how an intelligent people should govern itself, and that we should be imitating Israeli policies with regard to immigration. Groups like Anti-Defamation League would have a hard time explaining that one away (although it’s probably not beyond them).

But instead, Hawley seeks hide behind Jews. The ADL has a point when it accuses the president of using Israel as a “shield.” [ADL Condemns President Trump’s Racist Tweets and His Use of Israel and Jews as a Shield, Anti-Defamation League, July 15, 2019]

The excellent blogger The Z Man has accurately noted that whites are forever searching for an “external standard against which they can measure their preference.” “Only then can they declare that desire valid,” he wrote, “because it matches that standard. Whites no longer feel as if what they want is valid because they want it."[Because We Say So, TheZMan, July 21, 2019]

Thus, conservative beliefs can only be defended if they are said by a black person, a Jewish person, a Hispanic person, etc. Many non-whites within the Conservative Movement have used this to their economic advantage and have lucrative careers preaching to white audiences at conservative gatherings.

At the same time, the Republicans constantly try to prove Democrats are the “real racists” or Antifa are the “real fascists.” It’s intellectually dishonest—antifa are not “Nazis,” they are just variegated Communists or Anarchists. Can’t we just call them Communists and leave it at that?

Similarly, the Dinesh D’Souza tactic of calling historic Democratic leaders like Thomas Jefferson or Andrew Jackson “racist” isn’t a savage “own” of Democrats, it simply furthers the insane drive towards Political Correctness.

It doesn’t even hurt Democrats. It was only a few months ago that Beltway conservatives thought they scored a devastating victory against Virginia Democrats when photos emerged that Governor Ralph Northam likely had worn blackface in college. Instead, he outlasted the attacks and simply promised more concessions to non-whites. The Washington Post noted he might soon be more powerful than ever. [‘A Rare Position’: Va. Gov. Ralph Northam could wind up with great power; months after almost resigning, by Gregory Schneider, July 10, 2019]

Thus the solution is for Americans to speak as Americans explicitly in defense of American interests.

What is America? America is a majority-white nation created by Anglo settlers, built upon English legal customs and institutions, and speaking the English language. If it ceases to be these things, it ceases to be America.

Before the coming of the Pilgrim Fathers and the settlers at Jamestown, “America” did not exist as anything more than a geographic expression.

This is also why “Native Americans” is a nonsensical expression. It’s also something of an insult not just to Americans but to indigenous people who, until granted citizenship as recently as in 1924, were members of their own nations with their own histories, identities, and traditions.

If America is simply open to everyone in the entire world, it’s not anything. Yet this is what both the “right”:

America is an idea. That idea is freedom. And anyone from anywhere can become an American, if they embrace that idea. If they embrace freedom and embrace everyone else’s right to be free, it doesn’t matter their color or creed, we welcome them.

As long as they come here legally.

and Left think should be policy. [Michelle Obama after Trump’s racist tweets: ‘What truly makes our country great is diversity,’ by Anna Laffrey, CNN, July 20, 2019]

The correct way to respond? Stephen Miller came close in a recent interview with Chris Wallace. Criticizing “The Squad,” he said:

Let me just cut to the heart of the issue. These four congresswomen detest America as it exists, as it is currently constructed. They want to tear down the structure of our country. They want it to be a socialist, open-borders country.

If you, as Donald Trump said, want to destroy your country with open borders, you cannot say you love your country. If you attack border agents the way that Ocasio-Cortez has, it means you have a deep-seated hatred of the nation as it exists. That’s why you want to erase its borders, fundamentally transform the country, and in the process it doesn’t matter if American citizens lose their jobs, lose their homes, lose their livelihoods, lose their health coverage, and lose their very lives.” [Emphasis added]

Yet even this misses the point somewhat.

It’s possible to love your country and want to change its political or economic system. That’s what our Founding Fathers did. However, if you want to change the actual population of the country, that’s as pure a definition of treason as could exist. That’s facilitating an invasion. It defeats the very point of having a country.

That’s why the response to charges of racism against immigration patriots needs to be the counter-charge of treason.

But treason against what? Even to Stephen Miller, to President Trump, to Senator Hawley, America exists only as a vessel that contains certain “values” like being pro-Israel, or capitalist, or “free” (even though we aren’t really free anymore). The recent “National Conservatism” conference avoided defining the nation, though this vagueness didn’t save it from accusations of racism. [Trump and the dead end of conservative nationalism, by Zack Beauchamp, Vox, July 17, 2019]

On race too, Republicans don’t know how to push back.

While Republicans are quick to throw accusations of anti-Semitism, even as they themselves are condemned by the ADL, they can’t even bring themselves to say “anti-white.” Yet being “anti-white” is the default cultural stance of the MSM, the entertainment industry, and the political Left. Being anti-white may be what truly defines the Left—you can call for universal health care and basic income but you’re “far right” if you don’t want whites replaced in their own countries.

It’s easy enough to find examples of being explicitly anti-white. Yet not one politician or major cultural figure will call it out.

GOP incompetence might not really affect the political consultants, the nonprofit heads, and the elected officials who are more interested in pleasing donors and getting post-Washington sinecures than patriot policies.

But unfortunately, this GOP incompetence going to affect us. Texas will soon tip blue, just because of demographics. Americans, and whites, need to develop a vocabulary to defend our interests effectively in a country where we will be a minority. The goofing off and the grifting that characterize Conservatism Inc. won’t be sustainable much longer.

It didn’t have to be this way—but we’re going to have to fight to liberate a nation that will essentially be under occupation.

Come to think of it, maybe we are there already.