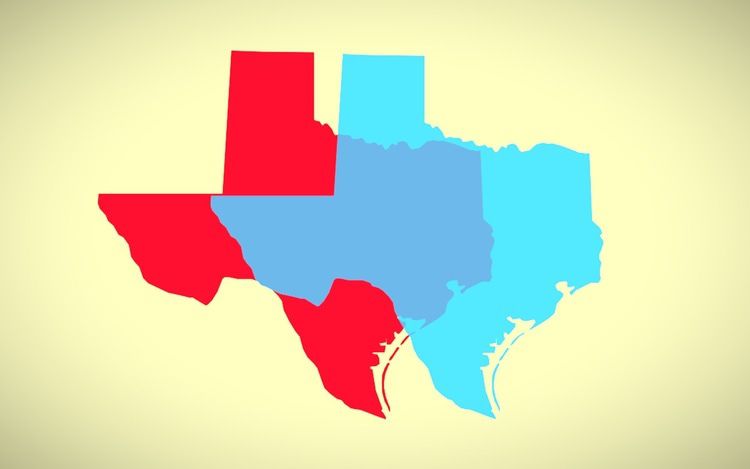 We Told You So.... Texas Going The Way Of California, Because Of Immigration

We've been saying it for years, and the Beltway Right keeps ignoring us. Well, reality is about to hit. Texas is almost a blue state, and it's because of immigration.

A powerful combination of demographic forces are propelling Texas from one of the reddest states in the union into a swing state. Democrats will likely make an outside play in Texas ahead of 2020, along with a full run for its projected 41 electoral votes. Texas also stands to gain three seats in Congress after the next census, making it a crucial state for both parties.

Texas demographics today are strikingly similar to those of California in 1990, before Democrats began their seven to nothing streak of Golden State victories in presidential races. Like California in 1990, the Texas population currently hovers around 29 million and is changing rapidly in light of heavy immigration from Mexico. The second generation children of Mexican immigrants have played a major role in keeping California out of Republican reach. This same transformation is taking root in Texas.

Immigration has already had a very tangible impact on Texas politics. While illegal immigrants cannot vote, their children born in the United States are indeed citizens and make up a significant share of the new generation of voters in the southern state. There are around 35 percent of Texans under the age of 18 who are the children of immigrants, a figure that has nearly doubled in the last 30 years. This carries weight.

There's one major problem with this story. California voted to save itself with Proposition 187. However, Governor Gray Davis simply didn't defend it when a judge ruled it unconstitutional. Democrat Gray Davis was later recalled, but his dereliction of duty and betrayal of democracy guaranteed permanent Democrat victory in what was once the Golden State.

On Election Day, everyone believes in identity politics. All those political consultants on TV, even the ones who denounce identity politics, divide up the population into ethnic, religious, and economic groups and target them systematically. That's how you win elections. In a diverse society, democracy is just a racial count.

Unfortunately for Republicans, they just imported their replacements, all so Big Business could have cheap labor.

We can thank pro-immigration grifters like Dick Armey for this. He and other goofballs would wear cowboy hats to fool the rubes but lobbying endlessly for more immigration for big business. Now, they'll probably end up with socialism.

How long until the Alamo is torn down for being racist, or retconned into a symbol of a great Mexican victory? Unless complacent Texas conservatives stop goofing off, not long.