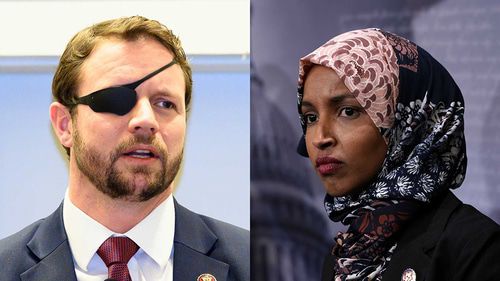 It’s fitting that it is happening to Dan Crenshaw. The freshman representative from Texas, a former Navy SEAL, has defended America’s endless foreign interventions on the grounds that “we go there so they don’t come here”. [Why guys like me go to places like Syria, by Dan Crenshaw, Washington Post, December 21, 2018] Yet now Crenshaw finds himself accused of inciting violence and promoting Islamophobia after sharing a video in which Congresswoman Ilhan Omar, who is of Somali descent, summarizes the September 11 terrorist attacks as “some people did something” during a March 23 speech before the Council [Ilhan Omar accuses Dan Crenshaw of ‘dangerous incitement for questioning her 9/11 comments, by Dominick Mastrangelo, Washington Examiner, April 10, 2019]. Perhaps Crenshaw will learn the truth—it’s pointless to go “there” because “they” are already here.

Ilhan Omar was not outright defending or excusing the September 11 attacks of course, though she can justifiably be accused of belittling them. Her comments focused on the alleged backlash and restrictions on civil liberties that descended on Muslims following the September 11 attacks. [Why isn’t Dan Crenshaw following his own advice with Ilhan Omar? By Wardah Khalid, Houston Chronicle, April 15, 2019]

In context, her statement was:

Far too long, we have lived with the discomfort of being a second-class citizen, and frankly, I’m tired of it, and every single Muslim in this country should be tired of it. CAIR was founded after 9/11 because they recognized that some people did something and that all of us were starting to lose access to our civil liberties.

But this doesn’t really make it better. The entire passage, and the entire speech, is one long complaint that America is not doing enough for her religious group.

The irony, of course: America has dramatically increased Muslim immigration since the September 11 attacks. September 11 meant nothing to our Ruling Class. Despite countless Islamic terrorist attacks throughout the West, it is now far less permissible to criticize Islam than it was before 2001. Ilhan Omar is also not a “second-class citizen”—she and those who share her skin color enjoy official status as a protected class with preferential status in jobs and education. She also can openly organize to defend the interests of both her ethnic and religious communities. Whites do not enjoy these same privileges, which is partially why many whites are so desperate to identify as a different group.

The Somali community that forms a crucial part of Omar’s constituency is only a few decades old. The first Somalis began coming to Minnesota in the early 1990s following the Somali civil war. [Good question: Why did Somalis locate here? By Jason DeRusha, WCCO, January 19, 2011]Not surprisingly, the refugee resettlement agencies that receive huge amounts of federal money pushed for this settlement. They are currently whining that President Trump has restricted the number of refugees, though this is a case of closing the barn door after the horse has left. [Resettlement of Somalis in Minnesota plummets in wake of Trump policies, by Ibrahim Hirsi, MinnPost, March 19, 2018]

There are reportedly now between 42,000 and 55,200 people of Somali descent in Minnesota, with the average age of 22 and the vast majority living in or near poverty. [What Minnesota’s Somali population looks like: young, Minnesota-born, and working, by Stephanie Dickrell, Saint Cloud Times, December 17, 2018] NBC’s Daniel Arkin suggests the number is higher, about 70,000. [Far from Washington, Rep. Omar’s constituents see the Israel controversy in a different light, March 10, 2019]

Omar herself arrived in 1992, though she did not originally live in Minnesota and only moved there as an adult. The Fifth Congressional district, which she now represents, is not majority black, let alone Somali. Politifact, in a condescending piece dismissing demographic transformation, suggests there are only 27,600 Somalis in the district. [Meme wrong about Somali-Americans in Ilhan Omar’s district, by Louis Jacobson, Politifact, March 5, 2019] However, it has a plurality of young voters, many of whom presumably come from what Politico’s Tim Alberta called the “vast Somali Community in the Twin Cities”. [The Democrats’ Dilemma, March 8, 2019] The district had already elected Keith Ellison, so there was no obstacle to electing another Muslim. In addition to being Muslim, Omar could also take advantage of the ethic network within her district. Additionally, Phyllis Kahn, one of the Democrats Omar defeated in the primary, called her “very attractive to the kind of what we call the young, liberal, white-guilt trip people”. [Rep. Phyllis Kahn predicts high voter turnout for primary; says opponent attracts “young, liberal white guilt-trip people, by Anders Koskinen, AlphaNews, June 23, 2016]. While this wasn’t the politically wisest thing to say, it aptly describes the district’s roots as populated by far-left, pathologically altruist Scandinavians determined to replace themselves.

A relatively large number of Minnesota Somalis have turned to terrorism, with the FBI reporting that 45 either joined al-Shabab or ISIS. [How Minneapolis’s Somali community became the terrorist recruitment capital of the US, by Hollie McKay, Fox News, February 16, 2019] A dozen more tried to join ISIS, but were arrested. Rep. Omar lobbied a judge in Minnesota for “compassion” for one of these potential terrorists. [Rep. Ilhan Omar asks judge for compassion in ISIS recruit sentencing, Fox 9, November 10, 2016] This shouldn’t be surprising.

Rep. Crenshaw’s heroics overseas are relatively pointless if an entire community of angry, resentful Muslims are then imported into the Untied States.

Omar has already gotten herself in trouble by supposedly saying “anti-Semitic” statements. During the recent hearings on “white nationalism,” Republicans constantly demanded Democrats denounce Omar’s “anti-Semitism” as enthusiastically as the GOP had condemned Steve King. Needless to say, the Democrats declined to do so. However, this increased GOP scrutiny on her, which enabled Republicans to seize on her recent comments.

Because of this controversy, Ilhan Omar and other far-Left members of the Democrat caucus are now claiming that Republican tactics are leading to “death threats”. [Ilhan Omar says death threats against her have increased since Trump’s Twin Towers tweet, CBS, April 12, 2019] These claims are being credulously repeated by the Main Stream Media. “It’s an extraordinary situation that she is facing this kind of danger because of something the president has directly done, which is completely wrong,” said CNN’s David Gregory, in a typical statement. [David Gregory: Omar facing death threats ‘because of something the president has directly done,’ by Owen Daugherty, The Hill, April 15, 2019] Scott Greer accurately observed that this is the same tactic used on college campuses, where progressives claim criticism is a threat to public safety, requiring censorship.

Of course, this only goes one way. Media rhetoric about President Trump being a “traitor” and Republicans being collaborators already contributed to the shooting of Steve Scalise. Yet Democrats did not moderate their rhetoric in response. Similarly, after a white nationalist terrorist attack, the political class does not urge understanding, tolerance, and compassion for frustrated whites. Instead, there’s censorship, gun confiscation, and scapegoating.

The truth is that Omar’s comments simply can’t stand on their own merits. Omar claims she “is just as American” as everyone else, but also thinks this country was founded on “genocide”. [Ilhan Omar: United States was ‘founded by genocide,’ by John Gage, Washington Examiner, April 11, 2019] She makes wild assertions about Stephen Miller being a “white nationalist,” apparently for no other reason than that he wants to reduce immigration, which slow the swamping of the Historic American Nation. [Ilhan Omar defends herself after calling Stephen Miller a “white nationalist,” by Sunlen Serfaty, Ashley Killough, and Veronica Stracqualursi, CNN, April 9, 2018]

If Omar is “just as American as anyone else,” as she claims, then being “American” means nothing.