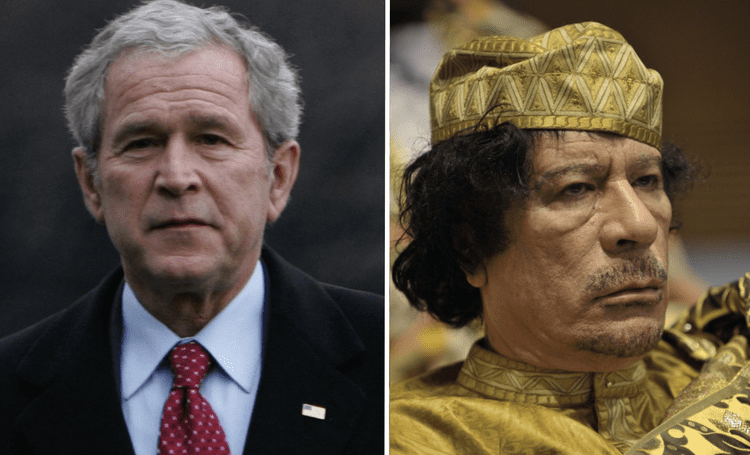 Dubya And Gaddafi: Two Men Ahead of Their Time

As an American, not being an American is Who We Are. The arc of the moral universe is long, but it bends toward all 7.5 billion (and counting) Pre-Americans moving to America to fight racist nativism.

As two statesmen explained the new orthodoxy fifteen years ago:

“America has never been united by blood or birth or soil. We are bound by ideals that move us beyond our backgrounds, lift us above our interests and teach us what it means to be citizens. Every child must be taught these principles. Every citizen must uphold them; and every immigrant, by embracing these ideals, makes our country more, not less, American.” – George W. Bush

“America is not only for the whites, but it is for all. Who is the America? The American is you, me, and that. When we go to America we will become Americans and there is no a race or nationalism called America and the Americans are those Africans, Indians, Chinese, and Europeans and whoever goes to America will become American…. American is for all of us and the whole world had made and created America. All the people all over the world had made America and it shall accordingly be for all of us.” — Col. Muammar Gaddafi of Libya