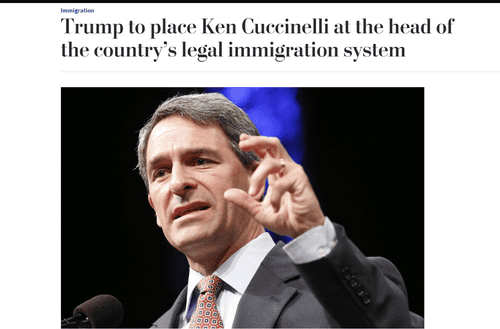 Ken Cuccinelli: Another Trump Opponent In At DHS

The purge continues at the Department of Homeland Security (DHS), though the wrong person is the subject of this particular firing. L. Francis Cissna, Director of U.S. Citizenship and Immigration Services has been asked to resign, and inexplicably Ken Cuccinelli has been nominated to replace him. As I stated before, Cissna is a Trump supporter and dedicated to reducing legal and illegal immigration. I spoke of the problems surrounding personnel and Cissna, ending with a moderate endorsement but with acknowledgement of his shortcomings.

Francis Cissna, the agency’s current director, has told his staff that he will leave his post June 1.

The move extends the purge of senior leadership at the Department of Homeland Security, replacing Cissna, a Senate-confirmed agency head with deep expertise on immigration law, with Cuccinelli, a conservative firebrand disliked by senior GOP figures, including Senate Majority Leader Mitch McConnell (R-Ky.) …

Cuccinelli, known more recently for combative television appearances and enthusiasm for the president’s immigration proposals, is even more disliked by Democrats.

[Trump To Place Ken Cuccinelli At The Head Of The Country’s Legal Immigration System, By Nick Miroff, Josh Dawsey, and Maria Sacchetti, Washington Post, May 24, 2019]

But back to L. Francis Cissna. Cissna has been from the first a strong supporter of Candidate Trump’s immigration policy. And he has worked hard, against a recalcitrant bureaucracy at U.S. Citizenship and Immigration Services (USCIS). A challenge to his authority he has not fully suppressed. He has also not made the basic personnel and training changes required as advised. [Taming U.S. Citizenship And Immigration Services, by Federale, Federale Blog (Deleted by Google), December 17, 2016] My patriotic sources at USCIS tell me he is the best Director of USCIS in the agency’s history, and that is correct.

As I wrote in April

My same sources tell me there are two problems deep in the Resistance bureaucracy at USCIS that Cissna has not been able to control. First, the Refugee, Asylum, and International Operations Directorate (RAOID) and the Office of Chief Counsel, or more particularly, the Offices of the Chief Counsel in each district and field office. Both components of USCIS are actively sabotaging enforcement, the Office of Chief Counsel in the field are acting to sabotage enforcement action. The various attorneys in local offices are sabotaging the filing of Form I-862, Notice To Appear (NTA), the charging document for deportable aliens and fraudulent application.

Cissna has been remiss on discipline, management, and, more importantly, dealing with the fundamental attitude at USCIS, that aliens are a customer rather than a fraud, crime, and terrorism threat.

However, how will Cuccinelli do better? Cuccinelli is a rabid #NeverTrump opponent of the President. Supposedly he has been pro-enforcement in appearances on Fox News, but that does not make up for basically knowing nothing about immigration law and policy, much less the ins and outs of the openly pro-terrorist bureaucracy at USCIS.

Now most of Cissna’s problems are his own failings. He has for some strange reason slow-walked many regulatory changes that he was well known to support before his appointment. The Washington Post story quoted above says:

Trump senior policy adviser Stephen Miller has been agitating for Cissna’s removal for months, and he has repeatedly railed about Cissna to the president, saying he is not in favor of the administration’s agenda and has delayed some of its biggest initiatives—while not writing enough regulations.

Miller also faulted Cissna for moving too slowly in implementing new rules that would penalize immigrants who use public benefits, expanding the agency’s ability to deny visas on the grounds that an applicant could be considered a “public charge.” The proposed changes triggered more than 200,000 public comments, all requiring a response from the agency.

And there is the failure to take charge of the bureaucracy, a major failing, and use bureaucrat game against immigrants, legal and illegal.

His relationship with Miller has long been frosty—at one point in a conference call during a debate over asylum laws in 2018, Cissna said “Enough!” to Miller, who he believed was pressuring government officials to ignore immigration laws.

So, while I see the need for Cissna to go, he could have been better, but Cuccinelli will unlikely be any improvement. I expect his confirmation hearing to be an embarrassment as he is asked technical questions about immigration issues that he cannot answer. And I expect the bureaucrats to run rings around him. I have suggestions for him, but those will not be heeded.

Of course, this is compounded by the rise of Kevin McAleenan to the, as of this date temporary, head of DHS and the ongoing sabotage of enforcement by the cadre of legacy Customs employees dominating DHS.

Personnel is policy! Time for Kris Kobach and Tom Homan. And yours truly is available.