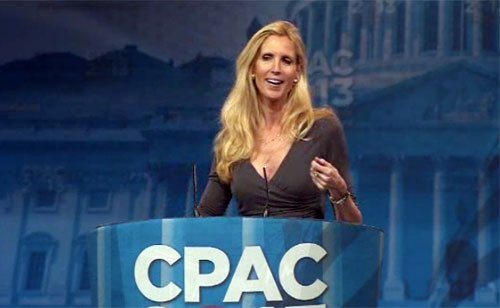 Ann Coulter must feel like someone trying to help a crack addict who keeps insisting he doesn’t have a problem. In the last GOP debate, most of the candidates showed a sociopathic indifference to the threat that immigration presents to the GOP’s (and America’s) future—even though the event was held in a state that Republicans have practically written off. And there is increasing evidence that forces within the GOP see the 2016 election, not as an opportunity to retake the White House, but as an excuse to conduct another Politically Correct purge within the American Right.

Coulter herself is the first one on the hit list. In response to the question of what AMERICA (!!!) will look like after they were President, candidates such as Ted Cruz, Mike Huckabee, and Marco Rubio rhapsodized about Israel. As part of Coulter’s running twitter commentary, she mocked the GOP’s obvious pandering with tweets that the usual suspects called “anti-Semitic”—despite Coulter’s very public record of support for the Jewish state.

Lost in the controversy: the simple truth that Coulter’s commentary was a criticism of Republican pandering—not of the principle of support for Israel or of the voting patterns of Jews. Coulter had spent the entire evening bashing the GOP for recycling decades-old talking points, including creepy invocations of Ronald Reagan and ludicrous plans to re-invade the Middle East.

All this is essentially a repeat of Coulter’s last Twitter controversy—when after the release of Donald Trump’s immigration policy, she jokingly tweeted she no longer cared if Trump wanted to perform abortions in the White House.

Of course, Coulter doesn’t support abortion any more than she opposes Israel, or, for that matter, opposes Ronald Reagan. But as she noted after the controversy erupted, the GOP candidates were essentially bragging about positions “100% of Republicans agree on”—so there was simply no need to constantly be talking about “abortion, Reagan, and Israel” all the time [Ann Coulter defends her controversial tweet about Jews, Business Insider, September 18, 2015].

In contrast, as Coulter’s latest book Adios America! makes clear, immigration is an existential threat to the Republican Party—and, even more importantly, the American nation.

If “Conservatives” want to survive—and want to see America survive—they need to be as insistent about ideological purity on immigration as they are about Israel and abortion.

Immigration can’t be treated as just another issue, but as the defining issue of the American Right.

It’s this policy that is driving the Donald Trump surge—as much as Trump’s style.

Trump has given political expression to a model of conservative discourse perfected by [Ann] Coulter and subsequently emulated by Glenn Beck, Mark Levin, Michael Savage, and others: 1) Say something controversial or provocative and get a ton of attention in the process. 2) When the media and the Left inevitably demand an apology, adamantly refuse to provide one, driving your critics batty and burnishing your conservative credentials with the base. It’s been Coulter’s modus operandi for her entire, lucrative career, and now Trump has brought it to the campaign trail: A real conservative never says he’s sorry.

But this model doesn’t apply to the current controversy. Those above have taken strong positions on immigration—but are hardly championing unapologetic discourse, especially given Coulter’s comments in context.

As for Glenn Beck, he gleefully proclaimed Carly Fiorina would be the Vice President of his “dream ticket” for 2016—and before that was declaring Donald Trump supporters (which is to say, a plurality of Republican voters) are “racists” [Glenn Beck: Tea Partiers Who Support Donald Trump Are Racist, Breitbart, September 15, 2015].

The stylized opposition to an imagined “liberal elite” that characterizes Conservatism Inc. is militant when it comes to issues like Iran or federal spending, but is gun-shy on race and issues that border on race, like immigration. Thus, obviously unrealistic rhetoric (like Carly Fiorina’s boast she simply would not talk to Russian President Vladimir Putin) are coupled with a refusal to take a clear stand on an existential issue like mass immigration.

The result: GOP voters are uniquely vulnerable to a rhetorical “outsider” who nonetheless shares the predilections of the hated “liberal elite” when it comes to immigration.

The latest example: Carly Fiorina, who is only an “outsider” because she lost a Senate election. And as Rush Limbaugh recognized, the main reason Fiorina is being “hyped” is to “get rid of Trump” [Fiorina’s the flavor of the week because the Establishment thinks she can take out Trump, Rush Limbaugh, September 18, 2015]. Once Trump is eliminated, the GOP can return to its 2012 strategy of pushing candidates who want upper-class tax cuts, more disastrous wars, more cheap labor, more outsourcing (something Fiorina is quite good at), and not much else.

Indeed, the GOP is already implementing a new wave of “tone policing” to try to downplay immigration patriotism.

Over the weekend, the Republican Party of California removed the term “illegal alien” from its platform, withdrew support for a requirement that workers on guest visas get tamper proof identification cards, and even abandoned a statement that government documents should be printed only in English. Needless to say, even though The Sacramento Bee noted the California GOP’s “long, mostly fruitless effort to draw more Latino voters into its fold,” it also reported that “many members of the state’s political and professional class” were blaming the party’s failures on…Donald Trump.

[California GOP softens on immigration, but will message get drowned out? By David Siders and Christopher Cadelago, September 20, 2015]

The change was proposed “by a Latino party official” named…Marcelino Valdez.[Email him | Twitter] It was described as a response to the “offensive” comments of Donald Trump and an “anti-Proposition 187 plank.” After all,

It's important to use “language that is more appealing to California's diverse electorate,” Valdez said.

Needless to say, this plan is already doomed to failure. Indeed, the California GOP just tried this plan in the 2014 gubernatorial election. The GOP Establishment heavily criticized their own onetime frontrunner, immigration patriot Tim Donnelly, and maneuvered to replace him with the man George Will said was the new Barry Goldwater: Indian-American banker Neel Kashkari.

Kashkari then pointlessly ran around California with his Beltway Right, pro-immigration, “pro-growth” agenda. Incumbent Democrat Jerry Brown barely even bothered to campaign. And Kashkari lost by 20 points even during a wave GOP election.

Tellingly, he got only 46% of California’s white vote, in a year when 64% of white men voted Republican.

The objective political reality: the winning strategy for the GOP in California is the same as in America—WIN WHITE VOTERS.

This fact exists regardless of whether the GOP “Smart Set” acknowledges it or not.

Ann Coulter’s tweet wasn’t “anti-Semitism” or even an attempt to be “edgy.” It was a frustrated cry from someone who sees the GOP’s indifference to immigration and insistence on cliché as amounting to the suicide of the Republican Party—and the murder of the United States.

As many Conservativism Inc. commentators only seem to understand recycled phrases, I’ll put it to them this way: they are fiddling while Rome burns.

What will the American future look like? We can already seeing it take shape in California, as a once-great state becomes part of the Third World.

And the Reagan Library that the Beltway Right so loves to fetishize may become an American version of the Tomb of Suleyman Shah.

It will be an island of American soil—surrounded by the territory of a foreign nation.

And the bromides of an irrelevant GOP will serve as nothing more than the testimony of folly in the history of another fallen empire.