President Trump apparently can’t decide whether he wants to be a nationalist for 2020 or a conventional GOP candidate. This internal battle was in full display this week.. The crowd at Trump’s Greenville NC rally spontaneously chanted “Send her back!” in response to his attack on Ilhan Omar (D.-Minnedishu). Trump seemed to appreciate it—but then appeared to disavow it the next day [Trump blames his supporters for echoing his racist words, by Zach Ford, Think Progress, July 18, 2019]. This epitomizes Trump’s dilemma: the crowds want the old Trump, not the post-election Trump controlled by Javanka. At least (not for the first time) Trump seemed to be backing away from his advisers by week’s end.[Donald Trump defends rally crowd that chanted 'send her back,' calling them 'incredible patriots', by David Jackson, USA TODAY, July 19, 2019]

The energetic Greenville crowd, numbering around 8,000, roared for the wall and Trump’s attacks against Democrats [Trump takes on ‘The Squad’ in N.C.; crowd chants ‘send her back’, by Bill Hand, GateHouse Media, July 17, 2019]. Along with Rep. Omar, the president also lambasted Rep. Alexandria Ocasio-Cortez (whom he simply called Cortez), House Speaker Nancy Pelosi, and Rep. Rashida Tlaib. Significantly, immigration was his chosen line of attack. He mocked Ocasio-Cortez’s contention that illegal immigrants are more American than the native-born. He noted Omar’s anti-Americanism and her frequent attacks on Israel. He did not actually mention his tweets suggesting she to go back to her “crime infested” country—but the crowd remembered and chanted “send her back!” with the same enthusiasm they chanted “lock her up!” three years ago.

Significantly, however, that the crowd did not appreciate Trump’s call for more high-skilled immigrants. “We believe in an immigration system based on merit, merit where they come in. We have so many companies coming in, automobile companies, companies of all types, and we need workers. We actually need workers. We have the lowest unemployment rate that we've had in 51 years,” Trump said. The crowd remained silent—and only offered muted applause at him repeating the “merit-based” claim shortly thereafter.

This reflects the Kushner-managed Trump. We haven’t heard Trump use the line about corporations needing more workers since March, but he did mention the merit-based approach at his first official 2020 rally last month. The crowds don’t care for it, but the president keeps talking about it because that’s what his business-oriented advisers want. In contrast, his crowds want immigration patriotism and bold, Politically Incorrect stands against the Left. In Greenville, they chanted “Send Her Back!”—not “merit-based immigration now!”

Of course, this chant outraged the Main Stream Media/ Democrat complex, provoking the usual hyperventilation about fascism and racism that accompanies any sign of American patriotism. It followed several days of non-stop outrage over Trump tweeting that non-white progressive Democrats should go back to their home countries.

To his credit, Trump did not apologize for these tweets. But he did defend them with some lackluster arguments, probably reflecting his useless White House advisers.. He argued those Democrats are anti-Semitic and hate Israel, thus it was okay to say they should go back. He also insisted he doesn’t have a “racist bone in his body.”

It would have been better if he just said the Leftist lawmakers hate America and don’t deserve to represent a nation they despise.

Regardless, Trump’s base ignored the shrieks of journalists and cucks and embraced his message. But, stupidly, the president repudiated their chant. Trump being upset at his supporters echoing his own opinions is a real gut punch. It would have been akin to Trump “disagreeing” with his supporters for backing the Muslim ban.

Reportedly, the president made this semi-disavowal due to pressure from those around him. Ivanka Trump and other senior advisers told Trump to distance himself. “Those chants have no place in our party or our country,” House Minority Leader Kevin McCarthy said. [Pressed by daughter Ivanka and Republicans, Trump rejects ‘send her back’ chants, by Julie Hirschfield Davis, Maggie Haberman, and Michael Crowley, The New York Times, July 19, 2019].

Trump’s advisers wish he would just run on low black unemployment, more LEGAL immigration, criminal justice reform, tax cuts, and unquestionable support for Israel. That would make life so much easier for them on the Georgetown dinner party circuit,

But the base wants the old Trump back. They want the wall, illegals deported, immigration reduced, American jobs protected, and no more stupid wars. Trump clearly understands this. He rarely touts Conservative Inc. ideas at his rallies, preferring tirades about immigration and Democrats. The “go back home” tweets shows signs of Trump wanting to return to his old self. So did his proposed Executive Order to impose the citizenship question on the census. However, he fails to stick with his nationalist bravado. He listens to Javanka and looks weak in the fallout.

Fortunately, Trump realized his mistake. He backtracked an hour later and said his chanting supporters were patriots. “These are people that love our country,” he told reporters. “I want them to keep loving our country.” On Friday, the president effectively took back his disavowal. “Those are incredible people. Those are incredible patriots,” Trump said of the chanters. He called Rep. Omar a “disgrace to our country” and said his real unhappiness over the chant was actually with her: “You know what I’m unhappy with — the fact that a congresswoman can hate our country. I’m unhappy with the fact that a congresswoman can say anti-Semitic things.” [Trump vows congresswomen ‘can’t get away with’ criticizing U.S., by John Wagner and Colby Itkowitz, The Washington Post, July 19, 2019]

But Trump should have made this statement when first challenged by reporters on Thursday. He looks weak from this episode. If Trump has any hope of securing re-election, he must demonstrate strength and return to his 2016 message. He will convince no one that he’s a respectable moderate by constantly switching between his good instincts and the terrible advice he gets from Javanka and the GOP Establishment.

The “Send Her Back” chant was a primal expression of Middle America’s resistance to dispossession. These voters instinctively know that people like Ilhan Omar and Rashida Tlaib are a threat to the Historic American Nation and are not real Americans. They’re disgusted that these lawmakers sit in Congress and insist America is a racist nation that must be transformed. Trump supporters may not articulate it in the best manner—but it’s something they want their leaders to express.

Trump’s tweets connected with his base in the way that his proposal of a  Muslim ban connected in 2016 primary. All the respectable commentators said Trump was finished for voicing such an “un-American” idea. Prominent Republicans condemned him. Yet Trump stood by it and rose in the polls.

Indeed, the Muslim ban may very well have won Trump the Republican primary. It captured the mood of the Republican base and showed courage. Most GOP voters agreed with the idea. [GOP Voters Still Support Trump’s Muslim Ban, Rasmussen Reports, April 16, 2016] The same thing happened with Trump’s “they’re rapists” comments about (some but not all) illegal infiltrators. It was a comment that horrified the MSM but resonated with Middle Americans.

That is how Trump became president. In office, he has obviously disappointed. The wall has not been built. Immigration has not been reduced. But Trump can still emphasize that these are why he needs another term in office. And he can possibly get these things done if he’s re-elected. The two most important issues for Republican voters are now the wall and reducing legal and illegal immigration.[Monthly Harvard-Harris Poll: Registered Voters, May 2019]. There’s a reason the crowds remain silent when Trump says “we need more workers.” 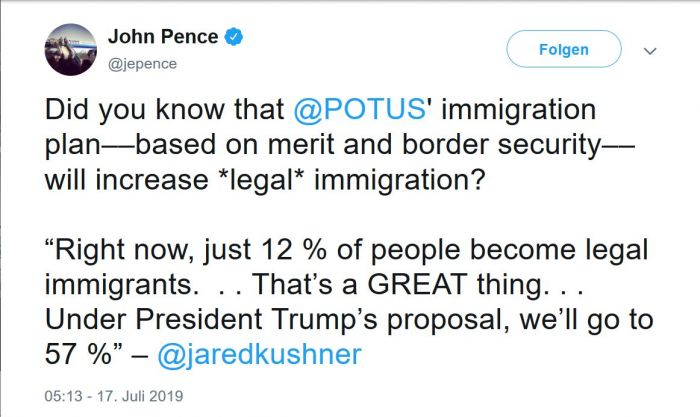 The Trump/ Kushner plan does not actually increase immigration. But it is clear that the people around him wish it did.

President Trump can appease Javanka and forget what he ran on in 2016—or he can return to his message and win another term.