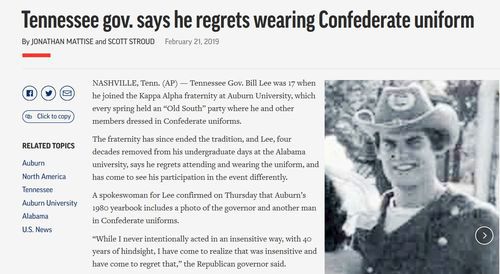 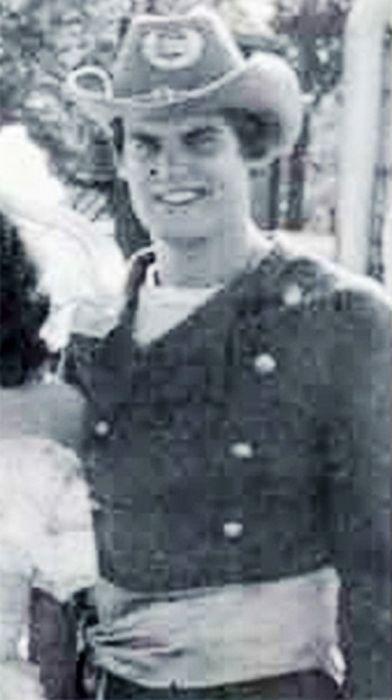 It is no longer in dispute that the Virginia "blackface" scandal involving Ralph Northam was an unmitigated victory for the Left. Northam is still in power and is using the opportunity to redistribute more money and resources to non-white groups. More importantly, the scandal has empowered journalists to engage in a never ending witch hunt. Though they missed the Northam blackface photo, journos are now hunting down what Republicans did 40 years ago, and turning non-offensive practices into a "scandal."

Thus, The Hill is trumpeting a report that the Republican governor of Tennessee attended an "Old South" fraternity party 40 years ago. Kappa Alpha banned the parties in 2010, though it has done nothing to stop the attacks on the fraternity, nor the attacks against the Greek system in general [Southern fraternity banishes Confederate uniforms, by Linda Wheeler, Washington Post, April 23, 2010]. The GOP governor, Bill Lee, is also choosing the strategy of apology and retreat.

He later said through a spokeswoman that he has never worn blackface, nor has he attended events since college that would be considered racially insensitive.

Of course, this pathetic display of cucking won't stop criticism, and The New York Times has piled on, among others. KA itself is also engaging in groveling.

In response to questions about the photo of Mr. Lee and “Old South” parties, Jesse S. Lyons, a spokesman for the fraternity, said Friday in a statement that the events were “never required, nor condoned.”

“For everyone, the collective revelation of these activities have served to educate us all on the past, punctuate the changes that have been made by our Order and in society, and direct us to continue to closely follow our values today,” Mr. Lyons, the fraternity’s assistant executive director for advancement and the editor of The Kappa Alpha Journal, said in the statement.

The only "value" I can see is a willingness to sell out everything and everyone to avoid criticism from journos who hate them anyway. Robert E. Lee is still recognized as the "Spiritual Founder" of the Kappa Alpha Order, but that's obviously the next step. And abolishing fraternities entirely is the end game.

Will fraternities themselves oppose what is happening? Will powerful alumni like Governor Lee? It won't stop until a force arises to stop it.