SLATE And The Beltway Right—Partners In Narrative Policing

The modern purpose of journalism is to police the Narrative. In a society where power is defined by who controls access to mass media (what Steve Sailer terms The Megaphone), journalists serve the same role and fulfill the same purpose as commissars did under the Soviet system that so many of them eagerly defended in years past: to silence viewpoints who pose a threat to the System that provides these smear merchants with a livelihood.

And unfortunately, they are enabled by the Beltway Right. American patriots can never hope for any progress until they stop looking to Leftist journalists for permission about what can and cannot be discussed within the movement.

Which brings us to Osita Nwanevu armflapping about VDARE.com in SLATE. As VDARE.com Editor Peter Brimelow has noted, Nwanevu doesn’t actually attempt to refute anything but simply points at the people he doesn’t like and screams for someone to stop them. 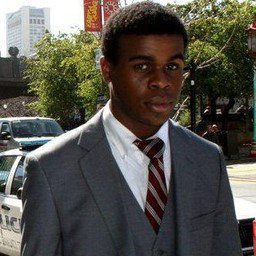 The spectacle of an Osita Nwanevu (pictured left) lecturing Americans on the authors they shouldn’t be allowed to read proves our whole point. Once you replace the actual nation with a conglomeration of random Third Worlders and pretend Affirmative Action mediocrities are public intellectuals instead of rent-seeking parasites, you will lose the political culture and the traditional liberties which made the country a good place to live.

But really, Nwanevu is not the core problem. Nor are Main Stream Media journalists generally, broadly speaking. As the low rungs of the managerial class, we can’t be upset at MSM journalists doing what it is in their nature. You don’t blame an animal when it escapes from a zoo and starts attacking people. The blame lies with those who let it out of its cage.

And that’s National Review itself. After all, as Nwanevu says, National Review now claims to be horrified by the rise of the Alt Right and wants a pat on the head from Leftist journalists for defying it. Thus National Review has granted these journalists moral authority. But they promptly turn around and quite correctly point out that National Review has published, and to some extent, continues to publish, figures who defended the kind of America First immigration policies championed by VDARE.com, Pat Buchanan, Donald Trump etc.

Despite the magazine’s disavowal of the alt-right, the platform it provided for these writers and its elevation—throughout its history—of ideas that have become central to the movement tie National Review to the alt-right’s intellectual origins. In truth, National Review can no more disown the alt-right than it can disown its own legacy.

How National Review Helped Build the Alt-Right| The magazine laid the foundations for the movement it now opposes, Slate, March 23, 2017

Of course, this is the exact same case the Alt Right itself has been making. (For years—see Buckley Fesses Up (Finally): National Review Has Caved On Immigration! by Peter Brimelow, August 23, 2000, and The Decline of National Review, American Renaissance, American Renaissance, September 2000.)Indeed, one could define the Alt Right as those dissident conservatives who take ideas to their logical conclusion instead of turning their brains off in order to keep a job as a political hack.

“These men have not simply been ‘accused of racism,’” [Tuttle] wrote. “They are racist, by definition. Taylor’s ‘race realism,’ for example, co-opts evolutionary biology in the hopes of demonstrating that the races have become sufficiently differentiated over the millennia to the point that the races are fundamentally—that is, biologically—different. 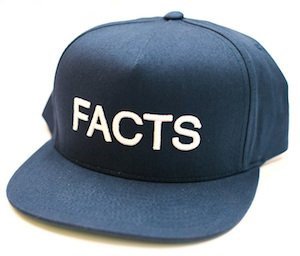 As a gimmick to promote its stale brand, Slate recently began shilling hats with the word “FACTS,” the most cringe-inducing piece of headgear since John Oliver was trying to push “Drumpf” [Manufacturer of ‘Make Donald Drumpf Again’ Parody Hats Files For Bankruptcy, by Katy Stech, The Wall Street Journal, November 18, 2016]. But as we see here, both National Review and Slate essentially believe certain facts—and psychometric and behavioral differences between the races are facts, no matter how caused—simply cannot be uttered.

One can’t help pitying anyone who puts scare quotes around the word “scientific.” It is more likely that the world is 4,000 years old, or that the Prophet Mohammad split the moon, or that Odin built the world out of the bones of a dead giant, than that different populations didn’t become biologically different over the millennia. In his eagerness to demonstrate his orthodoxy, Mr. Tuttle took the most implausible position possible, one repudiated by his own magazine and one that even the mainstream media is slowly backing away from.

[The Intellectual Rot at the Heart of the Beltway Right, April 9, 2016]

Naturally, Nwanevu has a different purpose with his piece than Hood. As an MSM journalist, which is to say, a Political Correctness commissar, Nwanevu complains that “the purges seem to have been incomplete.” His apparent objective: to get National Review to stop publishing even more hate-thinkers. His targets: Victor Davis Hanson, Jason Richwine and Charles Murray. He proclaims: 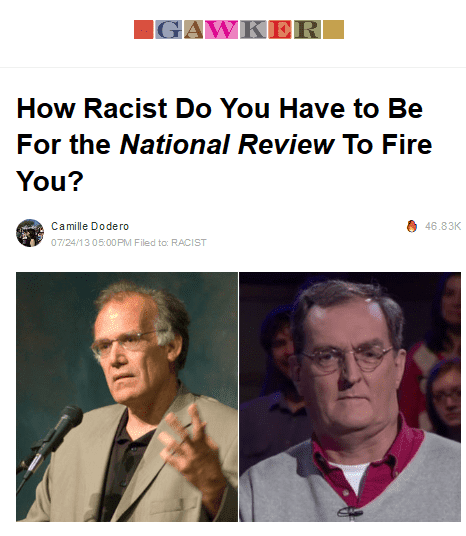 Victor Davis Hanson, a current writer for National Review and a frequent critic of multiculturalism, for instance, published a National Review piece about race and crime a year after Derbyshire’s firing that loudly echoed his offending column without similar repercussions, right down to the paternal recommendation to avoid black people. [VDARE.com Note: We noticed this ourselves at the time. See   John Derbyshire Wonders: Will NATIONAL REVIEW Derbyshire Victor Davis Hanson? and Is Victor Davis Hanson's Column Racist? Of Course It Is—He's White!] Jason Richwine, a researcher who left the Heritage Foundation after the discovery of his doctoral dissertation, in which he’d argued “the low average IQ of Hispanics is effectively permanent,” currently writes for National Review on, among other issues, Hispanic immigration. Charles Murray, whose 1994 book The Bell Curve promoted the idea of inherent racial differences in intelligence to wide controversy, wrote a defense of Richwine for National Review in 2013 and was a contributor as recently as last year. [Links in original]

Nwanevu’s approach is likely to be effective because National Review, and, more broadly, the Beltway Right, have already conceded defeat.

If “racism” is a core threat to the Conservative Movement, how can National Review justify publishing these men?

As this is written, there has as yet been no pushback from the National Review to Nwanevu’s attack. Nor could there be. After all, if “free speech” is the defense, why did they purge Derbyshire or Brimelow?

Once the essential ground in a debate has been conceded, there’s no systematic defense possible. It’s like allowing an enemy to flank a fortified position, making a rout inevitable, regardless of what resources you have.

Noam Chomsky may be a Leftist, but he identified a core truth about the nature of modern politics when he said:

The smart way to keep people passive and obedient is to strictly limit the spectrum of acceptable opinion, but allow very lively debate within that spectrum – even encourage the more critical and dissident views. That gives people the sense that there’s free thinking going on, while all the time the presuppositions of the system are being reinforced by the limits put on the range of the debate.

I wouldn’t be surprised if the old Communist would be willing to violate his rule to shut people like us up, but his point is still correct. And the accusation of “racism” is the most effective means of policing the debate.

There were some predictions that the election of Donald Trump would open up new space for the debate of critical issues. [Media Self-Destruct over Trump, by Jared Taylor, American Renaissance, October 28, 2016] But instead, Trump’s election seems to have served as a signal for a coordinated MSM offensive to shut down as many outlets as possible. The iron fist which always lay under the velvet glove of “diversity” is becoming more and more apparent.

The Beltway Right will not be spared in this process.

Conservatives, of course, do have a way out. They could simply returning to what their tradition actually entails. David French’s weepy invocation  of a “a politics of universal human dignity” is incompatible with Edmund Burke’s warnings against movements rooted in universal moral appeals rather than traditional institutions and concrete historical experience. If only on the classical conservative ground of prudence, no real conservative could ever be an enthusiast for mass immigration, which threatens to dissolve a social order painstakingly constructed over centuries. Nor does some evidence-free claim of racial egalitarianism deserve our respect.

But even more than a recommitment to truth and tradition, conservatives need a modicum of courage. As Nwanevu’s Slate article shows, even after they obediently punch to their right, Leftist journalists demand still more concessions from them. Why continue going along with this endless, slow-motion retreat?

It’s about time conservatives ignore Leftist journalists instead of taking their orders.

And if the Beltway Right isn’t capable of that small act of courage, well, remember there’s a reason we call them cucks.