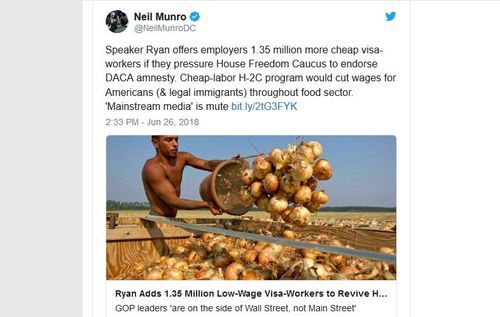 DACA And Farmworkers: Energizer Bunny Paul Ryan Is at It Again

Latin American farmworkers are nice people, I’m sure, but when they come to America they start at the rock bottom of the class system and basically only move up when some newer farmworkers are imported to take their jobs as they move on to, say, working in warehouses and the like. Yeah, their kids move up the ladder some on average.

But when this process was measured out to four generations by the UCLA Chicano Studies program in 2000, the long-term descendants’ educational attainment was not all that encouraging in terms of, say, what was implied about taxes the 3rd and 4th generation descendants of immigrant farmworkers paid versus budgets spent on their education, health care, welfare, policing and jailing.

For some people, like Democratic candidate for governor of California Gavin Newsom, this widespread trajectory is a feature not a bug of the system. Newsom is one of those people: a straight white male from a privileged background: his father was a judge and a lawyer for Getty Oil. (A family friend and business partner of Newsom in a wine shop was Gordon Getty, who was at one time the richest man in America and inspired Gordon Gekko in Wall Street). Newsom is so aristocratically fair and fine-featured that he makes Justin Trudeau look like a commoner.

By all that we’ve read over the decades about the Latino Electoral Tsunami that will be breaking real soon now, Newsom’s career should have been swept away by now by all the brilliant Latino politicians who must have arrived on the scene in recent decades.

Except … there aren’t many brilliant Latino politicians in California. (See above about how a huge fraction of California Latinos are descended from people who couldn’t get better jobs than picking crops in Delano.) Former L.A. mayor Anthony Villaraigosa was treated by the national media as if he must be one of those hypothesized brilliant Mexican-American politicians, but not by California Democratic primary voters, who viewed him like the inept overgrown juvenile delinquent he is and gave him 13% of the vote earlier this month.

On the other hand, enough Latino voters can be counted on to show up at the polls in California in November to elect Gavin Newsom governor of the largest state in the union. So it’s really all win-win-win-win for Gavin Newsom.

For GOP politicians who will come after Paul Ryan, well …