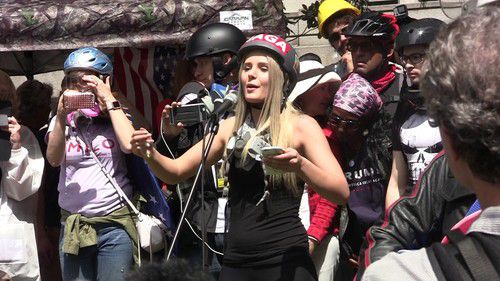 Requiem For Lauren Southern—And The Free Internet. Our Fight Continues

See also: Alt Right Not “Self-Destructing”—It’s Just Been Mugged By Government-Antifa Alliance. Establishment Conservatives Too, But They’re Too Stupid To Notice

In the weird but ominous New York Times frontpage story that caused such a stir this weekend, Caleb Cain, a self-proclaimed “liberal who cared about social justice,” recounted in tremulous terms his brief temptation by (very moderate) Alt-Right YouTubers before Leftist YouTubers, notably “transgender woman” Natalie Wynn, debated him out of it [The Making of a YouTube Radical, by Kevin Roose, June 8, 2019]. Which might appear to be a validation of free speech, if not of Cain’s intellect. But in fact the NYT is cheer-leading YouTube’s subsequent algorithm change “to promote videos from ‘authoritative sources’ over conspiracy theories and partisan content” a.k.a. increase suppression of non-Ruling Class views. Cain reportedly became “entranced by Lauren Southern, a far-right Canadian activist, whom he started referring to as his ‘fashy bae,’ or fascist crush.” But Southern, still only 23, has just announced her retirement. She arose in an online environment that allowed free speech. Her brilliant but brief career as a video-maker would be impossible now.

Thus last week also saw a sweeping YouTube crackdown on “extremist” content in order to “tackle hate,” including the demonetization of the Politically Correct but apparently too witty Steven Crowder—and even, bizarrely, XuriousMusicv, a purely instrumental music channel. This Totalitarian Left Kulturkampf is very serious.

Crowder, on whose hugely popular show Lauren Southern was an occasional guest, was demonetized following a vendetta by Vox’s Carlos Maza, the latest case of a vast corporation instantly responding to the personal grievances of a single Leftist journalist, a self-described “Marxist” no less. [YouTube ends monetization of conservative commentator Steven Crowder’s channel, several others after left-wing outrage, by Gregg Re, Fox News, June 6, 2019]

Though Crowder favors immigration law enforcement, his talking points generally are a slightly edgier version of what you would get from any Conservatism Inc. clearinghouse—tax cuts, Israel, why “Medicare for all” is a bad idea.

Maybe his treatment will be the bridge too far for Conservativism Inc. Ted Cruz, among others, is mocking YouTube as the “Star Chamber”. [Ted Cruz throws support behind Steven Crowder: ‘YouTube is not the Star Chamber,’ by Joe Concha, The Hill, June 6, 2019] Those uncomfortable with defending Andrew Anglin, Alex Jones, or others on “free speech for all” grounds will surely defend Crowder…we might hope.

Yet Crowder himself is protesting that he’s not “altright” and therefore shouldn’t be censored—while others, presumably, still should be.

Worse, the Beltway Right will go back to sleep if Crowder is given a pass. He isn’t an independent creator, but is aligned with a Respectable Right company. We might just get more barriers between “acceptable” conservative discourse and “unrespectable” speech that “even conservatives” agree should be banned. The ugly truth is that Conservatism Inc. benefits from corporate censorship, because it removes competition that it cannot otherwise handle. Already, the Beltway Right has a de facto working relationship with antifa to police the conservative movement.

Lauren Southern was one of the few people who engaged with both the Dissident Right and with Crowder and the rest of the mainstream Conservative Movement. Along with the redoubtable Faith Goldy, she got her start with Ezra Levant’s Rebel Media website in Canada. She distinguished herself not just with her video productions and street theater, but by putting herself in the thick of the action (notably, the Battle of Berkeley in 2017).  When she went “independent” around two years ago, she was able to call on fundraising platforms like Patreon and use YouTube for distribution.

In July 2017, Southern made a video describing “The Great Replacement”—the displacement of whites in their own heartlands by immigration. (YouTube now posts a description underneath calling it a “conspiracy theory,” which is what Leftists claim when they aren’t bragging that it’s taking place.)

Subsequently, ostensibly because of her work chronicling immigrant smuggling in the Mediterranean, Patreon banned her. This was about a month before Dissident Right deplatforming really began in earnest, following the Democrat riot against Unite The Right demonstration in Charlottesville, VA.

After UTR, the entire model of making independent videos was shattered by this relentless deplatforming. Raising money became difficult, because payment processors might cut you off. Going to street demonstrations was dangerous, because the right-wingers who would protect you got arrested while Leftists were let go.

Her most recent, and seemingly final, contribution was the documentary Borderless, about the collapse of the West’s borders. It created international news. Her team revealed that members of NGOs, sometimes motivated by their own spite against Trump voters, were coaching migrants to game the Asylum system. American Renaissance noted that it “influenced government action” because members of the Alternative for Germany “brought criminal charges against the NGOs for facilitating illegal immigration, partly crediting her reporting”. [Borderless: Lauren Southern’s Documentary Shows Migration Is All About Money, by John Jackson, June 4, 2019]

This was despite the fact that Borderless was if anything too restrained. It took a self-consciously centrist position. In a largely positive review, American Renaissance’s Gregory Hood took issue with Southern’s conclusion that “nobody wins” in the current situation:

Miss Southern concludes by recognizing the migrants’ humanity. They aren’t “invaders,” but people born in “unfortunate” countries and circumstances who have been “sold a lie.” She condemns the “very wealthy evil men” profiting from this situation. The “story of a borderless Europe is a story where nobody wins,” she says.

This isn’t true. The “evil men” are winning. Those who want to deconstruct Europe’s nations are winning. While some migrants end up in poverty, others receive massive welfare benefits. They are winning.

Many migrants don’t want to deliberately destroy Europe. Yet if enough arrive, they will.

In a more combative review, Red Ice’s Lana Lokteff argues the pressure just “got to be too much” for Southern and she was taking “the middle exit” to explain away youthful excesses. She notes messy rumors that Southern's production crew was secretly co-operating with Left and suggests Southern wants to escape to a “normie life” or even to an academic career. However, Lokteff discusses compassionately the stress of combatting an entire system that would crush most people—let alone a single woman as young as Southern.

But nonetheless, Southern is gone. And few others can fill the unique space she did.

Her short career encapsulates the rise and fall of an entire media subculture. She started with an online media company, then was an independent media creator, then an independent filmmaker, and then was, if not completely suppressed, at least hounded by the MSM into retirement.

Many have observed Big Tech will never let 2016 happen again because Trump won. But Conservatism Inc. will also never let 2016 happen again. The gatekeepers lost control of “their” movement. They’ve since recaptured it. Trump 2020 looks like it will be no different than McCain 2008 or Romney 2012, and early polls suggest it will meet with the same fate unless there is change.

Of course, one possible course correction would be for President Trump to champion free speech online. He could stop “monitoring” the situation and act.

But no matter what happens, many others are still in the fight—not least our writers, staff, and video contributors like Faith Goldy, who has suffered far more attacks from the MSM than Southern did.

The fight goes on, no matter the cowardice of Conservatism Inc. or the censorious wailing of the journos. And with your help, we can fight back, and we can win.