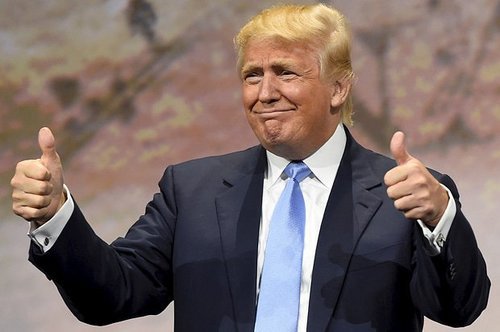 The Overton Window is a political theory describing how ideas go from the margins to mainstream, from “unthinkable” to “policy.” But in today’s anti-America, a Reverse Overton Window is visibly at work: existing law, policy, majority opinion, legal terms like “illegal alien” and established traditions like flying the Confederate Battle Flag are suddenly decreed to be beyond the pale for all good-thinkers. 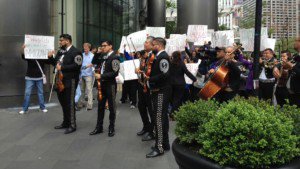 Case in point: the unprecedented political and economic terror campaign being waged against Republican presidential candidate Donald Trump for stating the facts about immigrant crime. (Right, "protesters" seem to have brought a mariachi band, which is comical,but the intent is to drive Trump out of business.) And this characteristically totalitarian Cultural Marxist drive reveals an American political and economic system increasingly defined by increasingly blatant hatred of the historic American nation in general and of white males in particular.

During The Donald’s presidential announcement, he made the now-famous comment the United States is not receiving the “best” people from Mexico, but instead people who are bringing “problems,” including “rapists,” “crime,” and “drugs”—although he stipulated “some, I assume, are good people.” Right on cue, Kate Steinle of San Francisco was murdered by Francisco Sanchez, an illegal immigrant who was deported five times but chose to return to the City by the Bay because of that liberal city’s Sanctuary City policies.

Yet instead of forcing the Democrats on the defensive over their treasonous refusal to enforce existing immigration law and to import Third World criminals, Trump’s statement has become a “hatefact”—scandalous by virtue of its Political Incorrectness.

Though Trump acknowledges he has suffered heavy financial damage from canceled contracts, and is also falling all over himself to deny he’s a racist, he has refused to back down on his comments [Trump: I Have Lost a Lot But I Am Right About Mexico, by Donald Trump, Newsmax, July 6, 2015]. His key talking point, “I can’t apologize for the truth,” is a more forceful repudiation of Political Correctness than anything a Republican politician has said in years [Trump on Mexico Comments: ‘I Can’t Apologize for the Truth’, by Pam Key, Breitbart, July 5, 2015].

By refusing to cave on his remarks, Trump has shifted the dynamics of the race and instantly catapulted himself to the status of a front runner. He may even have inspired some legislative action: Representative Duncan D. Hunter (the son of former Congressman and presidential candidate Duncan L. Hunter) is introducing legislation that will restrict funding to “sanctuary cities” [GOP Rep. slated to introduce legislation targeting sanctuary cities, by Caroline May, Breitbart, July 7, 2015].

Yet powerful forces are moving to shut down Trump, and, by extension, drive anyone who shares a patriotic position on immigration, out of public life. Hillary Clinton has called for the Republican Party to repudiate him because his position should not be allowed in the presidential campaign [Hillary Clinton ‘very disappointed’ in Trump, GOP on immigration, by Niall Stanage and Jonathan Easley, The Hill, July 7, 2015]. And she might just get her wish: Republican donor John Jordan is trying to spearhead a campaign to keep Trump out of the debates [Top GOP Donor wants Donald Trump banned from first debate, Breitbart, July 7, 2015].

As the GOP is now nothing else but a donor-driven party, Trump may face an uphill battle to be allowed to participate, regardless of his popular support.

Right now, television channels including (but not limited to) NBC, ESPN, and Univision, companies including Macy’s and the craft brewer 5 Rabbit Cerveceria, various participants and performers in the Miss USA pageant, and local governments including the City of New York have all tried to cut ties with Donald Trump and sever business relationships with him. The PGA Tour has also moved its Grand Slam of Golf event from Trump National golf course [PGA of America pulls tournament from Trump National L.A., Breitbart, July 7, 2015].

Many of these groups are also eager to make shrill statements through their spokespeople about Trump’s supposed “hatred” of Latinos [A Comprehensive List of Everyone Trying to Sever Ties With Donald Trump, by Hudson Hongo, Gawker, July 1, 2015].

And individuals with a social media presence are also getting involved. Mostly-white Open Borders advocate and former celebrity Eva Longoria, who finds it profitable to Live Action Role Play as an oppressed mestizo as her career fades, even managed to fulfill Godwin’s Law by comparing Donald Trump to Hitler [Eva Longoria Compares Donald Trump to Hitler, by Kipp Jones, Breitbart, July 1, 2015].

Of course, this campaign is hardly a natural occurrence. The Cultural Marxist pressure group Media Matters, which, like the Southern Poverty Law Center, defines political success as simply censoring or intimidating opposition groups out of existence, is leading a “Dump Trump” campaign on social media [Another company dumps Trump as controversy threatens to bite into his brand, by Kurtis Lee, LA Times, July 2, 2015]. The campaign is designed to destroy Trump by forcing companies to sever licensing agreements with him and to sabotage his brand by smearing him as a “racist.”

Exactly as predicted, the Main Stream Media is also going after Trump’s construction business for employing illegals, even though their presence proves his point that immigration laws are not being enforced [At Trump hotel site, immigrant workers wary, by Antonio Olivo, Washington Post, July 6, 2015].

For his part, Trump has triumphantly declared that he has the “silent majority” behind him [Trump: “The Silent Majority is Back,” Real Clear Politics, July 6, 2015]. But that may be part of his problem. An institutional failure of democracy is that a highly mobilized and organized minority that receives concentrated benefits can easily defeat a loosely organized majority which pays diffuse costs.

Trump faces a coalition of groups, including the ethnic lobbies, cheap labor lobbies, and specific Republican donors, who are willing to do whatever it takes to ensure America never enforces its immigration laws. In contrast, Republican primary voters are loosely organized, distracted by more than a dozen other competing candidates, and brow-beaten by a hopeless Beltway Right that believes immigration is less important than issues like the Export-Import Bank.

What’s worse, Trump faces an interlocking series of academic, media, and political institutions that consistently promote an Open Borders narrative and create online mobs to punish dissenters. “Mencius Moldbug,” aka Curtis Yarvin, has coined the term “The Cathedral” to describe the institutions that function as a 21st century equivalent to an established church. The Cathedral has the ability to create an artificial consensus on issues, even when the vast majority of people disagree with the opinions of the media and political class. The result is a culture of fear where anyone, at any time, faces economic destruction at the hands of unstable people whipped into a frenzy by the media.

Thus, even though the majority of Americans, and certainly the majority of Republicans, agree with Trump that immigration laws should be enforced, his opinion is treated as beyond the pale. (Yarvin too was essentially forced out of a software conference because of his nonrelated political writings [Strange Loop tech conference bans software engineer over political views, by Allum Bokhari, Breitbart, June 5, 2015]).

Trump is important because he represents the first figure with the financial, cultural, and economic resources to openly defy elite consensus. If he can mobilize Republicans behind him and make a credible run for the Presidency, he can create a whole new media environment for patriots to openly speak their mind without fear of losing their jobs.

What’s more, if enough Americans rally to him because of his contrarian populism, it could encourage businesses to return to or even seek out the Trump brand, marking one of the first times a top down effort to discredit someone for racial sensitivity has backfired.

Donald Trump, to his own surprise, is finding that America is no longer a free country [Trump Is a Little Surprised by Huge Backlash, by Rob Quinn, Newser, July 6, 2015]. Yet he seems determined not to play by the rules of the MSM and not to accept the artificial consensus of the political class.

For that reason, the campaign of Donald Trump is no longer about public policies, the Republican nomination, or even the Presidency.

It’s about who governs this country—the Main Stream Media (and whosoever controls it) or the American people.