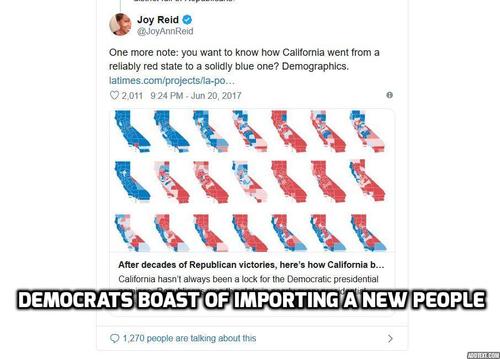 What Trump Must Say In His Oval Office Address: Democrats Want To Replace YOU

It should have been done sooner, but President Donald Trump is finally taking the fight to the Democrats on the critical issue of immigration. He will be visiting the southern border on Thursday [Trump to travel to Southern border Thursday, as shutdown standoff intensifies, by Brooke Singman, Fox News, January 7, 2018]. And he is expected to address the nation on Tuesday night from the Oval Office [Trump wants to deliver prime time address on government shutdown and will visit the border, by Maggie Haberman and Eileen Sullivan, The New York Times, January 7, 2019]. The President needs to emphasize one fundamental theme in this address— THE DEMOCRATIC PARTY IS TRYING TO REPLACE THE AMERICAN PEOPLE. It simply does not want to stop illegal immigration, let alone reduce legal immigration.

After all, Speaker of the House Nancy Pelosi recently declared that a wall is an “immorality between countries,” before adding that it’s not “cost effective” [Trump tells Democrats shutdown could last for months, years as talks fail to yield deal, by David Jackson and Michael Collins, USA Today, January 4, 2019]. Of course these are contradictory arguments—is the Speaker mad because a wall would work, or because it wouldn’t?

Similarly, Senate Minority Leader Chuck Schumer claims Americans don’t a wall to be the “symbol of America,” because, the “symbolism is bad for the country, for our economy, for our security, for our ability to get along in the world” [Chuck Schumer: Americans do not want Trump’s wall to be the symbol of America, by Tim Hains, RealClearPolitics, January 3, 2019]. But Schumer evidently does not feel the same way about Israel’s iconic border wall, which has been remarkably effective in stopping what the Israelis call “illegal infiltrators.”

Indeed, while Senator Schumer does not want one dollar to secure America’s border effectively, he recently accosted Senator Rand Paul in order to pressure him into releasing billions of dollars in foreign aid to Israel [Chuck Schumer Pauses Gym Workout To Press Rand Paul On Israeli Security Aid, by Alyssa Fisher, Forward, December 14, 2018].

Another typical argument has been made by Congressman Eric Swalwell, from the still-technically American state of California. He essentially argues that a wall is immoral because it implies a distinction between citizens and non-citizens, which is somehow inherently un-American. In other words, there is no real American identity and the effectiveness of walls is completely irrelevant.

My favorite part of the conservative outrage responses to this tweet is the “but the Berlin Wall was to keep people in” argument. Missing ENTIRELY that a wall is a wall no matter what side of it you are on. It’s medieval. It’s a symbol of “us and not us.” And that is not U.S.

To his credit, President Trump seems to understand what is really driving the Democrats. And he is making this case explicitly on Twitter.

....The only reason they do not want to build a Wall is that Walls Work! 99% of our illegal Border crossings will end, crime in our Country will go way down and we will save billions of dollars a year! A properly planned and constructed Wall will pay for itself many times a year!

He’s also nailing the Democrats down by hammering at their prior support for border walls and security barriers [Trump quotes Obama, Clinton in wall pitch, by Kyle Balluck, The Hill, January 6, 2019].

“We simply cannot allow people to pour into the United States undetected, undocumented, unchecked...” Barrack Obama, 2005. I voted, when I was a Senator, to build a barrier to try to prevent illegal immigrants from coming in...” Hillary Clinton, 2015.

And, as CNBC reluctantly admitted, President Trump’s social media strategy seems to be working, with far more traffic directed to his border control tweets than on other topics [How Trump’s tweet storms to rally support for the government shutdown seem to be working, by John Schoen, January 6, 2018].

Yet this can only go so far. The Democrats are not feeling pressure from their increasingly overwrought base to compromise after a successful congressional campaign. With the 2020 presidential campaign already underway, ambitious Democrat leaders also have a powerful motivation to pick an uncompromising fight with the president.

Thus, President Trump’s speech is not really about convincing the Democrats, but about rallying his own base and pressuring wayward Republicans. Some Senate Republicans, notably the ludicrous cuckservative Cory Gardner, are already eager to call retreat [Colorado’s Cory Gardner breaks ranks with Senate Republicans, calls for end to government shutdown, by Anna Staver, The Denver Post, January 3, 2019]. By creating an existential conflict between nationalist Republicans and explicitly pro-mass immigration Democrats, the president can foster a political dynamic that will make it harder for any GOP members to defect.

He can do this by making three major points in his address, all contributing to the fundamental theme of the Democrats’ desired population replacement.

Main Stream Media journalists, President Trump’s real opponent, are always eager to weaponize the misfortunes of photogenic illegal immigrants. Of course, it is the Open Borders policies favored by the journalists that are responsible for this human suffering. President Trump needs to make this point. In addition, he needs to highlight recent cases in which illegal immigrants killed Americans, cases that journalists would much rather ignore. The murder of Cpl. Ronil Singh, dead because of California’s sanctuary state policies, is a national disgrace. The death of Pierce Corcoran, allegedly killed by an illegal immigrant who swerved into traffic, is another [Mother of Pierce Corcoran speaks out after son’s death in car crash, Knox News, January 6, 2019]. MSM Journalists regard such deaths with indifference, but Americans are unlikely to be so complacent about the deaths of their countrymen.

Bafflingly, infuriatingly, incredibly, the president still refuses to mention a remittance tax. This allows Democrats to claim, accurately, that the president is abandoning his promise that Mexico would pay for the wall. But a remittance tax is practical and would force Democrats to explain why is necessary to allow the outflow of billions of dollars to foreign countries while America’s own borders remain unsecured [Congress hides a ‘pot of money:’ fines on illegal aliens, remittance tax, by John Binder, Breitbart, December 19, 2018]. This concept could change the debate instantly.

So much of the journalists’ Open Border agenda depends on the repression of speech. (Democrats pols don’t matter, they are merely empty vessels filled by journalists.) Leftist commentators are quite open about their desire to replace Americans with more compliant foreigners [Thank you, Michelle Goldberg, by Gregory Hood, American Renaissance, October 30, 2018]

One more note: you want to know how California went from a reliably red state to a solidly blue one? Demographics. https://t.co/0WaiIJXLJf

Yet if conservative commentators points this out, they are met with a wave of phony outrage and attempts at deplatforming [Fox News’ Laura Ingraham Echoes ‘You Will Not Replace Us’ Nazi Chant in Vile Segment Attacking Legal Immigration, by Cody Fenwick, Alternet, October 17, 2018].

Nevertheless, an increasingly number of Republicans are willing to point out the truth—that Democrats want to “change the American electorate in order to win elections,” as Congressman Mo Brooks put it [Watch: GOP Rep. Mo Brooks Explains Why Democrats Want Open Borders, by Ryan Saavedra, Daily Wire, December 31, 2018]. Even Bill Kristol has admitted as much.

If President Trump makes this argument explicitly, from the Oval Office itself, it will force discussion of this obvious point. And it’s a discussion that journalists and their puppets in the Democrat party absolutely don’t want to have.

All of this culminates in one fundamental theme—Democrats want to replace you and unmake America.

As the Mueller investigation nears its conclusion and Democrats are already talking impeachment, President Trump’s back is to the wall—literally. He was elected as the defender of the American nation and the bane of the Establishment, though he’s governed more like a typical conservative. Now, when it matters most, he must truly become the Commander-in-Chief and throw down the gauntlet to the media and its Democratic allies on the National Question: Does America have the right to be an independent nation-state, the political expression of a particular people, with sovereignty and control over its own borders?

President Trump is about to battle for his political survival—but there’s no better ground to fight on than the question of our national existence.

Trump should welcome this battle. And so should immigration patriots.