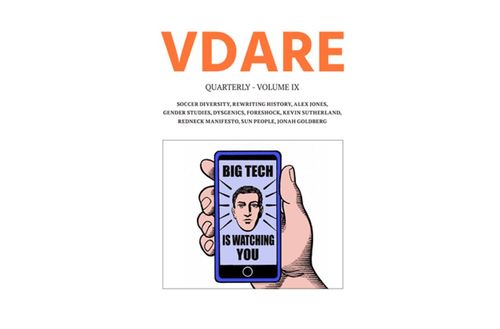 [The latest VDARE QUARTERLY is out! Readership is recovering after PayPal arbitrarily destroyed our subscriber list when it cut us off from its payment system after the 2017 Unite The Right Rally in Charlottesville—despite that fact we had nothing to do with it. But we urge you to SUBSCRIBE NOW while you can. In the current post-Trump Reign Of Terror, it’s not at all impossible that patriots will eventually lose the internet and be forced back to direct mail to find facts and analyses about America’s ongoing immigration disaster that the Establishment media, Left or “Right,” will not report. We need to build networks NOW! Note: All subscribers also get access to digital copies—we’ve not given up on the internet yet!] 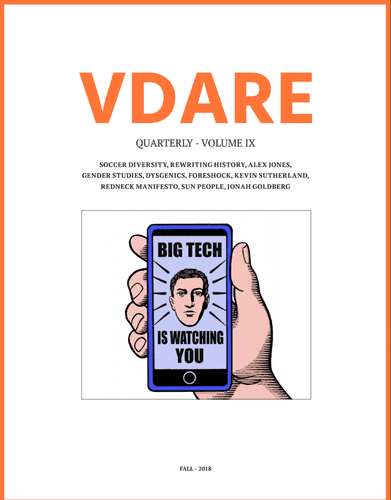 LETTER FROM THE EDITOR: Since President Trump’s inauguration, it’s become remarkably apparent that the Main Stream Media thinks it should be running the country, instead of the democratically-elected leadership. Unfortunately, recent months have shown that, to some extent, the MSM does have the ability to set the agenda. This edition of the VDARE Quarterly contains some of the most important articles from this critical period, pieces that will be essential reading for years to come.

Summer and fall 2018 saw the acceleration of the tech industry’s purge of Dissident Right websites, notably that of Alex Jones’s Infowars. Paul Kersey saw what few others did, that it was immigration that triggered the offensive against Jones, not “conspiracy theories.” I chronicled the now overt alliance between violent Antifa and the so-called free press and called for the GOP to confront the Totalitarian Left. We exposed how the most recent dissent by the Leftists on the Supreme Court paved the way for using “thoughtcrime” as a legal weapon to dismiss patriotic legislation as unconstitutional. And Nathan Doyle called for an alternative media to emerge to challenge the shills of the ruling class in the MSM.

Another key trend in recent months was the cynical attempt by the Open Borders lobby to use Christianity to agitate for open borders. Allan Wall has a piece on how grassroots believers are rejecting this sinister tactic. Nicholas Stix covers the new developments in the Knoxville Horror case, a shocking crime all but ignored by the MSM. And John Derbyshire and Dennis Petrov provide an invaluable look at how the assumptions of the Cold War and the reflexive anti-Russian hostility of our ruling class are warping not just America’s foreign policy, but America’s immigration priorities.

Lance Welton’s contributions to this volume will be essential reading for years, if not decades to come. His articles on the destructive effects of “gender studies,” the inability of China to sustain civilization, and academia’s war on English history provide a critical underlying structure for understanding recent developments.

This volume also features the work of one of VDARE.com’s more prolific recent authors, Hubert Collins. With his biting satire on the mediocrity of Jonah Goldberg and the Beltway Right and the strange saga of murder victim and uber-leftist Kevin Sutherland’s post-mortem Twitter account, Collins stakes his claim to be perhaps the most dynamic young author on the dissident Right today.

These and other pieces show that VDARE.com isn’t just putting out timely commentary but commentary that is designed to last for all time. We thank you for purchasing this volume and hope you’ll revisit it in the months and years to come, as we continue our endless fight for the survival of our people, nation, and civilization.

Yours in the struggle,