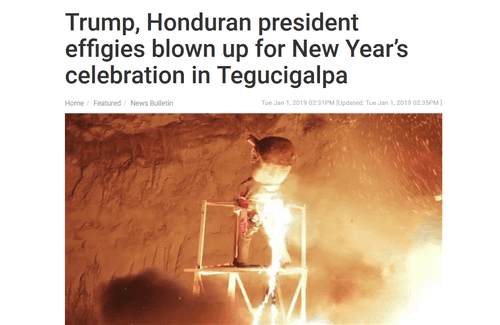 In something of a belated gift to immigration patriots on December 28, Trump fired this blast at 4:16 a.m. at the Pelosi-Schumer, open-borders Democrats:

We will be forced to close the Southern Border entirely if the Obstructionist Democrats do not give us the money to finish the Wall & also change the ridiculous immigration laws that our Country is saddled with. Hard to believe there was a Congress & President who would approve!

Just a few hours later in Mexico, a reporter asked AMLO about the salvo:

[T]he President of the United States tweeted again, threatening to completely close the southern border with Mexico. What would that imply for Mexico … with this shutdown of the government for not having the funds to completely build the border wall?

AMLO could have knocked that one out of the park with a typical anti-Trump tirade. Instead, the prudent president watched the first pitch strike sail over the plate:

[W]e have acted with prudence, and cautiously. We have not expressed an opinion on this topic, because it is an internal matter of the U.S. government, with two sides, and we prefer to abstain. Besides, we are seeking to always maintain a very good relationship with the government of the United States. We do not want to be unwise. We do not consider that we should participate in this matter, to express an opinion about it.

As I pointed out before Christmas, the newly-minted Mexican president was going out of his way not to criticize Trump. He still is.

Contrast that with many of Trump’s own countrymen, who criticize Trump, no matter what he does, in the most vile terms.

Mexican Government And The “Third Country Agreement”—Is There Or Isn’t There?

The anti-Trump, Open-Borders U.S. Main Stream Media have reported that the United States and Mexico have agreed that the latter will be a “Third Country” holding station for infiltrators working the asylum racket. Hondurans and other Central Americans who marched north to storm the U.S. border and claim asylum must wait in Mexico while their cases crawl through immigration courts.[Homeland Security Secretary Nielsen says asylum seekers will be forced to wait in Mexico, by Anne Flaherty, ABC, December 20, 2018] But in Mexico, the  government denies making any such agreement.

At AMLO’s a.m. presser on December 24, he addressed the issue up front—after he took care of more important business: “First, to wish Mexicans una Feliz Navidad (a Merry Christmas).” The war on Christmas hasn’t gotten very far in Mexico.

Then he discussed migrants generally:

There is a special situation in the United States and I reiterate our desire to maintain a very good relationship with the United States government, a relationship of friendship and of cooperation for development. At the same time, we maintain our principles of defense of and respect for the human rights of the migrants, of Mexican migrants and migrants of other nations of the world.

Mexico has not accepted, under any condition, neither de jure nor de facto, the status of safe third country for the treatment of persons who enter our territory, seeking to enter the United States of America. A safe Third-Country agreement is an international commitment of a binding nature, subscribed to by means of a bilateral treaty. Mexico does not accept, nor will accept, signing a treaty of this nature. A Third Country treaty would mean that all the migrants, all, from anywhere in the world, who pass through Mexico to the United States to ask for asylum, would be returned to our country with the only option of seeking refuge in Mexico. That’s why we do not accept a treaty of this nature.

So the Mexicans deny making a Third-Country agreement with the Trump Administration. Yet Mexico is accepting third-county nationals turned away at the U.S. border. That’s what matters.

The   Mexican government’s official position is that there is no agreement to make Mexico a "safe third country", obligating Mexico to take those migrants whose asylum cases are pending.

However, according to a Mexican foreign ministry statement issued on December 20th, the Mexican government, while not obliged to take the migrants, is, for now, taking them anyway. The statement reads in part:

"Mexico reaffirms its sovereign right to admit or reject the entrance of foreigners to its territory...the government of Mexico has decided to take the following actions in benefit of the migrants...to protect the rights of those who desire to initiate and continue the process or asylum in U.S. territory."

Also, "(Mexico)will authorize, for humanitarian reasons and temporarily, the entrance of certain foreign persons entering from the United States, who have entered that country...who have been interviewed... and have received a summons to present themselves before a (U.S.) migratory judge."[Posicionamiento de México ante la decisión delGobierno de EUA de implementar la sección 235(b)(2)(c) de su Ley de Inmigración y Nacionalidad (Mexico's position re the US Government's decision to implement section 235 (b) (2) (c) of its Immigration and Nationality Law)]

What it amounts to is that Mexico denies that it has "Safe Third Country" status for at least for now, is functioning as one at least temporarily, for humanitarian reasons.

Mexico says it will make other changes too. “Mexican migratory policy is drastically changing,” Ebrard said. “Today, for the migrants who pass through our country we can call the experience one thing: a horror. Harassment, abuses, rapes, accidents.”

The new president, Ebrard said, has told deputies that “the human dimension” must regulate Mexican migration policy, and—in Ebrard’s words—“we will not permit the abuse of people’s rights.” Mexico’s migration policy will be a “humanitarian … example for the world.”

We’ll see about that.

“Migratory policy is changing rapidly,” Interior Minister Olga Sanchez Cordero said, and “it is going to be an orderly and peaceful policy, and regulated. Thereafter, the migrants who enter our country will have, in the beginning and always, to respect Mexican migration law.”

So will Mexico continue deporting illegal aliens? We’ll have to see.

In Honduras, Trump Burned In Effigy

The villains of 2018 are reflected in the traditional [effigies] that are burned at midnight this 31st of December, when thousands of Hondurans gather in families to say farewell to the old year. One of the most beloved traditions for Hondurans includes the principal controversial personalities of 2018, including many national and international politicians. The most common of the popular [effigies] is U.S. president Donald Trump, characterized by his harsh gestures towards Honduras, especially involving illegal immigration.

Trump was the No. 1 choice, but other effigies represented the Honduran electric company, notorious for power outages and a price hike, and, as noted, Honduran President Juan Orlando Hernandez. An article from another Honduran source reported that a 23-year old woman was burned “in various parts of her body when an effigy burst…when one of the firecrackers exploded near both her legs”.[Joven se lastima piernas cuando quemaba monigote de año viejo  ConfidencialHN, January 1, 2018]

You see, to make effigy-burning more exciting, they have firecrackers inside them!  In fact, the same article reported that “Some 45 persons have been attended (medically) during December and New Years fiestas as a result of “gunpowder manipulation.”

A January 2nd Honduran article reported two more gunpowder injuries, and a January 2nd article from another Honduran source
reported 11 injuries that day alone from fireworks, bringing the Honduran total to 75 (I assume for Christmas and New Years festivities).

Coming to a neighborhood near you!

Federal prosecutors, by way, have indicted President Hernandez’s  brother, Tony, on charges of cocaine trafficking and weapons offenses. From 2004 through 2016, the feds allege, the former congressman was a “large-scale drug trafficker who worked with other drug traffickers in, among other places, Colombia, Honduras, and Mexico, to import cocaine into the United States.” [Former Honduran Congressman And Brother Of The Current President Of Honduras Charged With Conspiring To Import Cocaine Into The United States And Related Firearms Offenses, Justice.gov, November 26, 2018]

But back to The Donald. Why do they hate him so much? One reason might be that he repeatedly told the truth about the migrant “caravan,” an invasion force of criminals and the unemployed masquerading as refugees. “There are a lot of CRIMINALS in the Caravan,” he tweeted on Nov. 21.

There are a lot of CRIMINALS in the Caravan. We will stop them. Catch and Detain! Judicial Activism, by people who know nothing about security and the safety of our citizens, is putting our country in great danger. Not good!

Even before that, he told them to go home.

Then he made the biggest mistake you can make—not that he cares!—if you don’t want to be burned in effigy. In yet another gift not only to immigration but also America First patriots, he threatened to cut off foreign aid to the countries sending migrants.

Honduras, Guatemala and El Salvador are doing nothing for the United States but taking our money. Word is that a new Caravan is forming in Honduras and they are doing nothing about it. We will be cutting off all aid to these 3 countries—taking advantage of U.S. for years!

Darn right! Why do these countries feast on the largesse of American taxpayers, then look the other way as their people strike out for the United States?

Check out the videos to see America’s No. 1 Immigration Patriot go up in flames.

Founded in 2013, its platform demands the government “control immigration to serve the needs of the national economy, and the capacity of those who arrive to integrate and accept our values.”

A party video features party leader Santiago Abascal and comrades riding across Andalusia on horseback, set to the music of Lord of the Rings.  Title: The Reconquista will begin in Andalusia.

You gotta love that reference to the original Reconquista, the 780-year campaign that ended when the great Spanish monarchs Ferdinand and Isabella defeated the Islamic Nasrid dynasty at Granada in 1491.

Spain’s El País explained a truth about Vox’s victories: The more migrants in a voting municipality, the more votes for Vox.

As well, “a strong relationship exists between the Vox vote in a municipality and the quantity of immigrants from outside the European Union, mostly South Americans or Africans,” the newspaper reported. “Vox obtained more votes in municipalities with more foreigners.”

Almost unique in public policy, immigration enthusiasm contains within itself what Marxists used to call a "fundamental contradiction." The reason goes to the point that Enoch Powell, who increasingly must be judged the greatest British political leader of modern times, made in his prophetic 1968 immigration speech: “Numbers are of the essence.” By increasing the number of immigrants, the enthusiasts increase the number of problems—their problems.

Democrats should take notice. But they won’t.