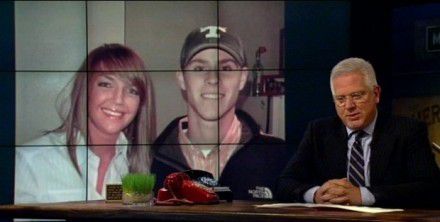 Glenn Beck Had Never Heard Of The Knoxville Horror

The kidnapping,  torture,  rape, and murder of white couple Channon Christian and Christopher Newsom  by five blacks is termed by VDARE.com the Knoxville Horror. It happened in 2007, and was the focus of absolutely no non-internet national media, but considerable local coverage.

On Instapundit this morning I saw this:

ALAS, I’M QUITE FAMILIAR WITH IT: The Gruesome Story of a Murdered Tennessee Couple You May Have Never Heard – But That You Will Never Forget.

15 Comments Posted at 8:43 am by Glenn Reynolds

It turns out that Glenn Beck had never heard of the Knoxville Horror.

After a radio caller made him aware of the extremely disturbing story of Christopher Newsom and Channon Christian in Knoxville, Tenn., Glenn Beck researched the case and was horrified at what he found.Though the details are hard to hear, Beck told the couple’s story in excruciating detail during his show on TheBlaze TV Tuesday. The killings occurred in 2007; however, Beck says the media failed to give the case adequate coverage due to special interests or negligence. It's a tribute to the success of the regular media in suppressing black-on-white hate crimes that Glenn Beck had never heard of it. (Glenn Reynolds had heard of it, but not only is he more plugged-in than Beck, he's actually in Knoxville, a professor at the University of Tennessee.)

Having finally heard of it, Beck then fails to get it. His story doesn't say that it's a story about five blacks attacking two whites, it's a black hate crime, the media is suppressing black hate crimes, or any of that. The words "black" or "African-American" don't appear in the story. The attackers are named (Lemaricus Davidson, Letalvis Cobbins, George Thomas, Vanessa Coleman and Eric Boyd) and pictured: The caption under that is "The faces of evil ", which will probably get Beck slammed as racist anyway, in spite of the fact that he's still not actually saying it.

Beck slammed “so-called” civil rights leaders Al Sharpton and Jesse Jackson for failing to demand justice in the brutal case. He criticized the media just as harshly for failing to give the story the coverage it deserved.

Sharpton and Jackson's role in society has never been to condemn black murderers, but to try and get them off the death penalty. As for the media's role, OK, I'm there with him of course,  but what's his excuse for never having heard of it? It was all over the internet.