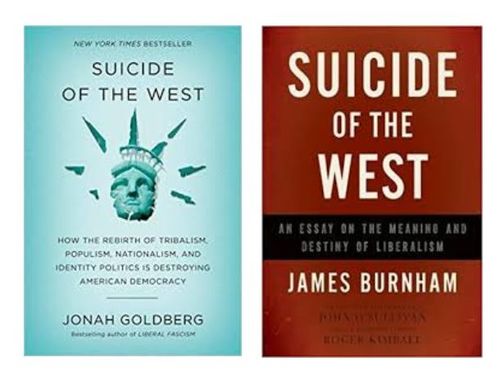 No, Peter Brimelow, I Am Not Reviewing Jonah [Expletive Deleted] Goldberg's New Book

See, earlier  Gottfried on Goldberg: “Suicide Of The West”—Or Of "Conservatism"? 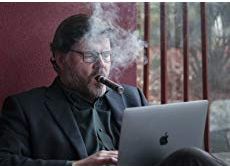 Would you read a book written by a guy with this photo as his profile on Amazon?

A few months ago, VDARE.com Editor Peter Brimelow asked me if I might review neoconservative #NeverTrumper Jonah Goldberg’s new book, Suicide of the West. I value my free time highly, so I was pretty dubious—Jonah Goldberg, who has been a media-touted professional token Conservative for all of my life (he’s Gen X, I’m Gen Y), has never to my knowledge said anything interesting, and there are plenty of books I would like to read that are certain to be good. I promptly wrote back to Mr. Brimelow: “I just checked on Amazon and Jonah Goldberg's new book is 464 pages long. I wouldn't be willing to read that for less than a ridiculous sum that I wouldn't accept from anyone to just read a useless book and review it.” Mr. Brimelow dropped the matter after that, and the brilliant Paul Gottfried reviewed it for VDARE.com instead.

Then, more recently, Mr. Brimelow emailed me a mixed review of the book [Jonah Goldberg’s Burkean Turn, June 26, 2018 by Matt Purple at The American Conservative] and asked me again if I might review it. While I am aware of the longstanding tradition of writers shamelessly reviewing books without reading them (two brilliant writers, George Orwell and Joe Sobran, both did this, the former even writing an amusing essay about doing so), I think this practice is detestable, and hope to never do it. So I replied to Mr. Brimelow: “Ugh. I'd be willing to write you an amusing polemical article-length explanation as to why I am not willing to read/review it. That's the best offer I can give.”

And incredibly, Mr. Brimelow said “Sure.” So, dear reader, here we are. 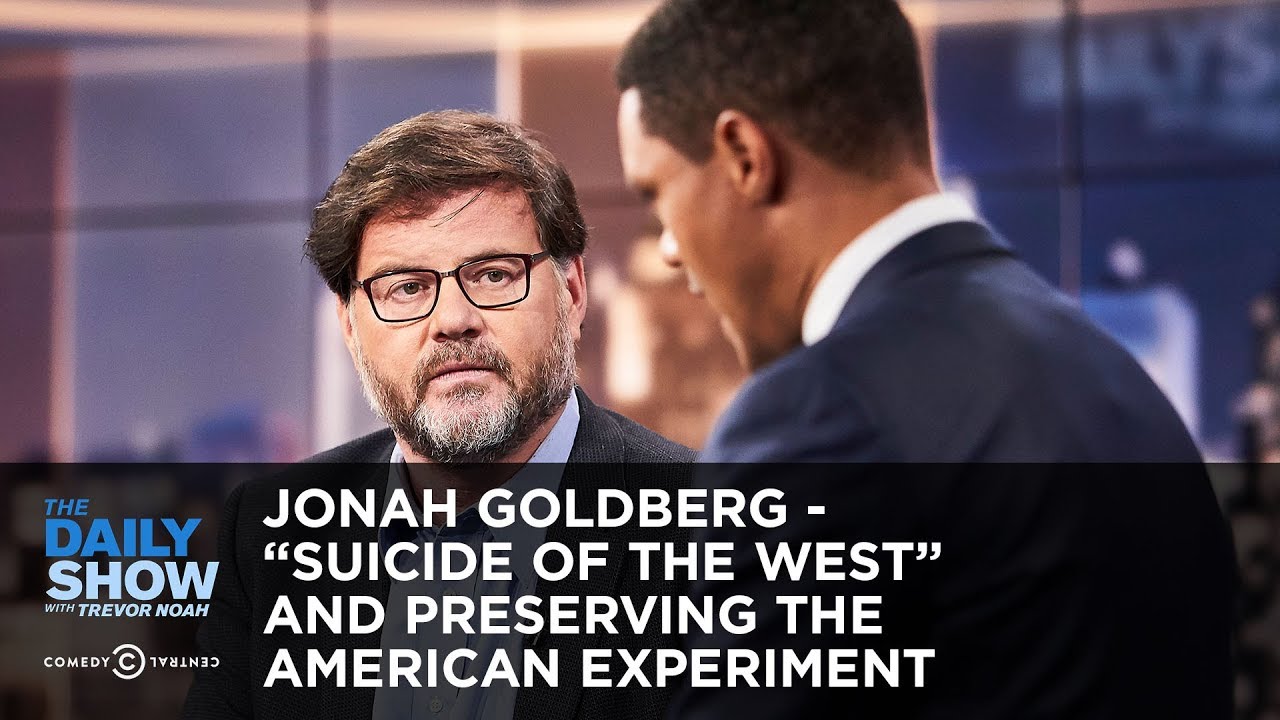 Mr. Goldberg’s thesis, gleaned from reviews and his endless electronic media appearances, is that the biggest thing (if not the only thing) that makes “the West” great are our Enlightenment/Lockean/Classical Liberal values. These values champion and protect individualism, relatively free trade, relatively unregulated markets, and simple and straightforward laws and jurisprudence that apply to everyone equally.

At present, Mr. Goldberg feels that these values are besieged by Left and Right. To the Left are non-white identitarians and Cultural Marxists, to the Right are populist nationalists. Both groups, in Mr. Goldberg’s eyes, reject the Classical Liberal values that have made the West great, and instead are “tribalists.” As tribalists, they simply want their team to defeat and dominate other teams, and do not care about markets, equality under the law, etc.

Mr. Goldberg fears these forces might defeat the Classical Liberal center, and in so doing, will cause the “Suicide of the West.”

This argument is retarded because of mankind’s historical record between the late seventeenth century (when Mr. Goldberg marks the emergence of his preferred values), and the 1960s. During these 300 or so years, each and every Lockean, free marketer, Classical Liberal, and Enlightenment proponent was a “tribalist” by Mr. Goldberg’s standards—and “racist” by the standards of basically everyone alive today. 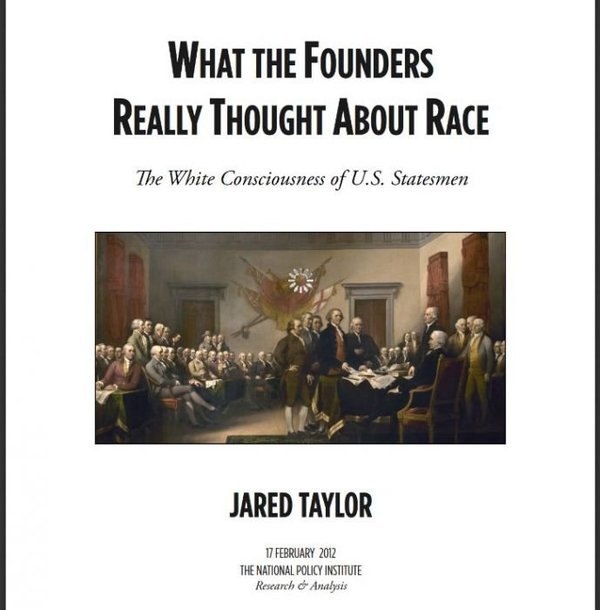 The Founding Fathers of America were deeply influenced by all that Mr. Goldberg likes (Locke, markets, etc.), and they were also de facto white nationalists.(See What the Founders Really Thought About Race, by Jared Taylor, National Policy Institute, January 17, 2012 [PDF]) As Mr. Goldberg may, or may not, be aware, many also owned black slaves and killed American Indians in combat. America’s first immigration law, the Naturalization Act of 1790, allowed citizenship for "free white men of good character." This is not ambiguous or subject to interpretation, it is an inarguable objective fact about American history.

During the same 300-year span, the United Kingdom, where most all Classical Liberal values originated and were adhered to, managed a global empire that was racially aware—to say the least—and (for a while) practiced race-based slavery. If John Locke, Thomas Jefferson, George Washington, and Adam Smith hopped into a time machine today and surveyed the planet’s political, cultural, and racial norms, they would not say: “Boy, things were going just as we wanted up until recently. Let’s hope America eschews Donald Trump’s style of politics and those of Black Lives Matter.”

But, in a nutshell, that is what Mr. Goldberg wants us to believe.

Fundamentally, only in the 1960s did anybody even suggest that the Anglo political tradition of small governments, free markets, and individual rights was incontrovertibly at odds with any level of national or racial consciousness. I know that Mr. Goldberg does not address this in his tome, so there is no point in reading it. His entire thesis is rebuked by 300 years of history.

Another thing that should never be forgotten about Jonah Goldberg: he supported George W. Bush. President Bush, readers may remember, started the Iraq War. That war was pointless and stupid. The estimated number of human deaths caused by it currently sits at just south of 1.5 million. The national debt we accumulated to have that war is in the trillions. And for what? Not a goddamn thing. Iraq was a total Trumpian s***hole before we invaded it and is still a total s***hole.

Furthermore, President Bush made repeated efforts to extend a massive Amnesty to illegal aliens. And he also greatly expanded the Federal government’s ability and right to spy on its citizens, most famously through the PATRIOT ACT. And at the end of the Bush Presidency, there was an economic crash so monumental that it is second in American history only to the Great Depression.

Jonah Goldberg liked President Bush, and still defends him. He thought there nothing incongruous about conservative and/or GOP support for him. But he has written a book about how monstrous Donald Trump is because this President wants to change our immigration laws and tweak our trade policies to benefit Americans.

No-one can support George W. Bush, oppose Donald Trump, and be taken seriously. Maybe if President Trump messes up, launches a catastrophic invasion of some Third World hellhole, and then the economy crashes to an extent on par with the Great Recession, the case could be made that he is worse than Bush II. But until then, no way.

Another point worth noting: the title of Mr. Goldberg’s new book is taken from James Burnham’s 1964 work, Suicide of the West. Just as with the Lockeans of the past few centuries that Mr. Goldberg admires, the late Burnham was “racist” by today’s standards. Back in the day, he wrote for National Review, today, he would be purged just as John O’Sullivan, Peter Brimelow, Joe Sobran, John Derbyshire, and a whole host of others were. In a 2016 essay disparaging James Burnham, the anti-white Leftist Jeet Heer correctly noted that,

Burnham was also a white supremacist. As Samuel Francis noted in the magazine Chronicles Magazine in 2002, “in the 1960’s, Burnham defended segregation on pragmatic and constitutional (though not explicitly racial) grounds and, by the 70’s, was suggesting actual racial separation of blacks in a ‘non-contiguous’ area accorded ‘limited sovereignty.’ He also defended both Rhodesia and South Africa, as well as other right-wing states.” In fact, Burnham thought that South Africa’s Apartheid system could be a model for America, with blacks confined to Bantustans.

[Nostalgia for Flawed Thinkers Won’t Solve the Crisis of the Conservative Intellectual, by Jeet Heer, The New Republic, October 31, 2016.]

Perhaps Mr. Goldberg knows all this, and simply wants to set it aside and hope he doesn’t get caught obfuscating the matter. If that is the case, then Mr. Goldberg is retarded, because in the age of the internet, somebody would obviously bring this matter to light.

Or perhaps (Peter Brimelow’s theory) Mr. Goldberg is just not aware of any of this, and has simply not read any of Burnham’s body of work. If that is the case, Mr. Goldberg is retarded. James Burnham was a genius, and should be read by everyone interested in American conservatism, contemporary power structures, and foreign policy.

As an aside, Burnham was also right about all the things for which Mr. Heer attacked him.

What does threaten Lockean and Classical Liberal values is the rising tide of color, mass immigration, Cultural Marxism, and an emboldened Left—all of which also threaten the traditional Western nation state, and the white race as a whole.

But who in their right mind would take tips from Jonah Goldberg as to how to push back against any of those threats? What track record does he have of success in this? What about his belief system is compelling, and could be trusted to emerge victorious against the Left in the “marketplace/battlefield of ideas”?

When is it that Gen Y millennials like me and the subsequent Generation Z will warm up to the seductive ideals held by middle-aged Conservatism Inc.-ers like Mr. Goldberg? How soon will it be before they subscribe to colorblind Lockeanism because they finally realize how great tax breaks for the wealthy are?

Ah yes, the famous typical American family we all know and also are a part of https://t.co/nFPpYlaZ7B

Or will they be first won over by the splendor of the atrocious wars Mr. Goldberg advocates? Libertarians can at least offer them (i.e. us) peace and a whole pleasuredome of legalized vices. Socialists can at least offer college debt forgiveness and medical care. Identitarians can offer community and stability.

What does Conservatism Inc offer? A country perpetually at war in faraway lands whose domestic politics and culture are a cross between the cubicles of a call center and an Evangelical church?

Mr. Goldberg’s history is wrong, and his politics are awful. So no, I am not going to waste my time reading his stupid new book.