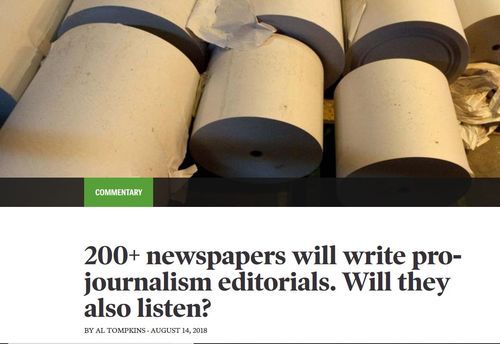 Last week, more than 200 newspapers wrote separate editorials denouncing President Trump for calling the press the “enemy of the people”. [200+ newspapers will write pro-journalism editorials. Will they also listen? By Al Tompkins, Poynter, August 14, 2018] All of this happened on the same day as part of one coordinated action.  One is tempted to ask how it was any different than any other day.

Since President Trump entered office, I mean, since he announced he was running for president, the mainstream media has monolithically opposed him. What the Democrats do or don’t do is almost irrelevant. As Steve Bannon accurately observed, the media is the true “opposition party” to President Trump.

What is truly striking about journalists’ response to President Trump is that aside from criticizing them, President Trump hasn’t actually done anything. Let’s be clear—for all the supposed ways President Trump is a so-called “fascist dictator,” there isn’t a person in the country who has paid any kind of a price for criticizing him. You can call him the vilest names imaginable and you won’t suffer any consequences. The only people I can think of that have paid any kind of a price are anti-Trump Republicans in GOP primaries.

Yet journalists are outraged at President Trump because he has the temerity to criticize them and call out their dishonesty. The term “fake news” really seems to have gotten under their skin, especially because the mainstream media originally wanted to use that term to describe pro-Trump outlets. The press is sometimes called the “Fourth Estate” but lately I get the sense they really do believe themselves a breed apart, a group of people who are beyond criticism and who determine what should and should not be heard.

For example, the deplatforming of Alex Jones and Infowars isn’t just happening randomly. It’s been spearheaded by CNN, which has been hammering away at the Internet network and demanding that it be taken offline. In other words, CNN’s journalists see their main job as silencing other journalists. They aren’t serving as a check on power, but are crudely exercising power. We can expect Infowars won’t be the last—if Alex Jones and his millions of followers can be silenced, certainly smaller outlets will be the next to go.

The Republican Party is largely silent about the deplatforming of many of its own committed followers. Of course, this is election meddling on a mass scale and is going to hurt the party both in the upcoming midterm elections and in the 2020 presidential race. Yet one can’t help but suspect Conservatism Inc. likes it this way. Its priority, after all, is to pose as the sole existing opposition to liberal hegemony. That’s how they keep getting donations, foundation grants, and TV gigs shadowboxing with the leftists who actually run things. The Beltway Right isn’t going to speak up for Jones or whoever follows him.

What we really need is freedom of speech online so we aren’t dominated by a monolithically leftist political class. A free country deserves true diversity of opinion, not hundreds of newspaper editors who are all saying the same thing. The power of the Fourth Estate needs to be broken, and the best way to do that is to empower ordinary Americans. It’s time for President Trump to take real action to make sure the First Amendment applies to the Internet monopolies—and ensure that not just his movement, but that freedom of speech, still has a future in this country.