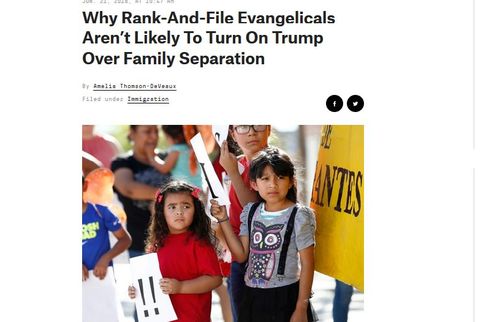 Typically, the outcry about President Trump’s family separation policy for illegal aliens quickly acquired a religious dimension. Not for the first time, the Treason Lobby wants to send Christians on a guilt trip.

Thus CNN commentator Van Jones, for example, an Obama legman until he was fired for being too extreme, lectured conservative Christians:

We need sharper statements from our conservative Christian friends. This is a no-brainer. This is not hard. You can say I want the most secure borders ever, but I don’t want to scar children. I do not want 2-year-old babies who are going to be emotionally scarred for 20, 30, 40, 50 years — “where is my mama, where is my mama.” For three months, six months. You don’t want that to have a secure border. And you don’t have to do that to children to have a secure border.

Of course, these crocodile tears over “the children” are just a tactic to stop all detention and deportation, steps toward Open Borders. What Jones and his ideological comrades want: more Democratic voters.

Yet chief among these lachrymose reptilians are the elitist Soros Evangelicals. They’ve been banging the drum for Amnesty for years. Now, they’ve organized and signed a statement condemning family separations. As The Atlantic correctly observed, however, they were already critics of Trump:

For the most part, the groups and leaders who have spoken out most harshly on the border separations are those who have already established themselves as critics of the Trump administration’s policies. At the beginning of June, the Evangelical Immigration Table—a coalition of evangelical organizations that advocate for immigration reform “consistent with biblical values”—put out a statement condemning the family separations and this administration’s refugee policy. “The traumatic effects of this separation on these young children, which could be devastating and long-lasting, are of utmost concern,” the letter says.

Signatories include Russell Moore, the head of the political arm of the Southern Baptist Convention who has long been an outspoken Trump critic; Scott Arbeiter, the president of World Relief who has condemned Trump’s immigration and refugees policy; and Leith Anderson, the president of the National Association of Evangelicals, who advocated unsuccessfully for relief for DACA recipients who were brought to the United States as children. One signatory, Samuel Rodriguez, the president of the National Hispanic Christian Leadership Conference, is on Trump’s evangelical advisory council, and he spoke at Trump’s inauguration. But he has also consistently pushed for immigration reform in the past.

VDARE.com readers know this gang. We’ve written a lot about Russell Moore as well as Leith Anderson, and Samuel Rodriguez. World Relief is the NAE’s “humanitarian arm,” as Wikipedia describes it. But it doesn’t get most of its funding from voluntary tithes, as St. Paul described them in 2 Corinthians. Rather, the booty comes from “government and other public grants” [Consolidated Financial Statements And Report Of Independent Certified Accountants, World Relief Corporation Of National Association Of Evangelicals, Sept. 30, 2017].

That means you, American taxpayer.

Anyway, it’s not surprising that the Soros Evangelicals jumped on the “family separation” bandwagon.

As for Moore, on June 18, he tweeted a Biblical injunction:

Father and mother are treated with contempt in you; the sojourner suffers extortion in your midst; the fatherless and widow are wronged in you. [Ezek. 22:7]

Given that this prophecy was directed at ancient Jerusalem, one might accuse Moore of using the Bible out of context. And note that Moore didn’t read a little further:

And I sought for a man among them who should build up the wall and stand in the breach before me for the land. [Ezek. 22:30]

Wow! —A prophecy about The Donald?

But not all Christians agree. Most notable is Tony Perkins, president of the Family Research Council, which Southern Poverty Law Center still calls a hate group despite the $PLC-inspired shooting at FRC’s headquarters [D.C. Shooter Wanted to Kill As Many As Possible, Prosecutors Say, by Carol Cratty and Michael Pearson, CNN.com, Feb. 6, 2013].

Observed Perkins on his radio program, speaking to Attorney General Jeff Sessions: “The reality is if American parents put their kids through what these immigrant parents have done to their kids — they would be charged with child abuse.”

Evangelical leaders aside, what about the pew sitters? Most are not Soros Christians, according to the liberal FiveThirtyEight:

Over the past few weeks, religious leaders have emerged as some of the strongest critics of President Trump’s “zero-tolerance” immigration policy that has resulted in the separation of children from their parents at the U.S.’s southern border….But it’s not clear how much damage to his popularity and credibility has already been done, particularly among white evangelical Protestants. This group has been a bedrock of Trump’s base since he was elected, so it would be a big deal if—as some have predicted—the images and sounds of children being removed from their families and placed in cages and warehouses were to diminish his support among conservative evangelicals.

Right now, however, even though some white evangelical leaders have condemned Trump and the family separation policy, there’s no evidence that their followers are poised to turn on the president. Indeed, there are a couple of reasons to think many white evangelicals will react differently than their leaders who have criticized Trump.

White evangelicals, you see, “[are] more likely than any other religious group to support hardline immigration policies and to have negative views of immigrants overall.”

The article also cited the Pew Research Center, which reported that 70 percent of white evangelical Protestants support the border wall, versus about half of white mainline Protestants and white Catholics [Americans Broadly Support Legal Status For Immigrants Brought To The U.S. Illegally As Children, by Carroll Doherty, June 18, 2018]. Another Pew survey, FiveThirtyEight reported, showed 44 percent of white evangelical Protestants think “immigrants are a burden” [Political Typology Reveals Deep Fissures On The Right And Left, Oct. 24, 2017]

And here is FiveThirtyEight’s Daniel Cox:

More than other groups, white evangelical Protestants seem to perceive immigrants as a threat to American society. So even if they don’t like this particular policy [family separation], they’re on board with Trump’s approach to immigration in general, and that makes it likelier that they’ll see this as a tactical misstep rather than a breaking point.  [Why Rank-And-File Evangelicals Aren’t Likely To Turn On Trump Over Family Separation,  FiveThirtyEight, June 21, 2018]

In other words, if Trump wants to keep their support, he better remain tough—and perhaps get tougher—on immigration.

I’m not for separating families any more than Jones, Moore and their morally-preening pals. I don’t suspect you are, either. So think about this:

Illegal-alien children are dragged hundreds of miles by their parents, and sometimes by imposters, across Mexico, where they are the targets of criminals and abuse by Mexican officials. They ride atop trains. They float across swift-moving rivers. They are endangered by dogs, wild animals, criminals and people smugglers. Human traffickers might kidnap, rape or kill them.

Aside from asking what kind of parents would endanger their children this way, consider this truth: Once ICE detains them, they are safe, with a bed and three square meals a day. Yet Soros Evangelicals such as Moore say the men and women of ICE are the bad guys?

Moore and his Treason Lobby friends might reread the commandment about lying. And they should remind these illegals—easily done in this age of instant, mass communication—of the simple way to keep their families together: Stay home.