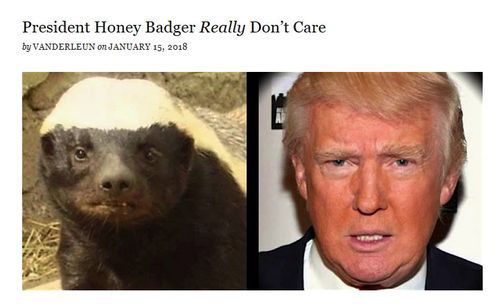 Donald J. Trump seemingly never passes up a chance to make his enemies squirm. The latest collective coronary among global mandarins was set off by Trump’s comments about alleged Russian meddling in the 2016 presidential election at the press conference following his meeting with Putin on Monday. Trump said he didn’t see why Russia would have carried out the hacks—and he also raised the perfectly reasonable question of why the FBI hadn’t seized the DNC servers. [Trump Throws a Server Wrench into Mueller’s Indictment Machine, by Mark Tapscott, LifeZette.com, July 16, 2018]

The Main Stream Media had already warmed up with a hissy fit over Trump’s comments to the Sun newspaper during his visit to the U.K. Trump commented on mass migration that is transforming Europe, saying that “what has happened to Europe is a shame.” He didn’t stop there, adding that immigration has

changed the fabric of Europe and, unless you act very quickly, it’s never going to be what it was and I don’t mean that in a positive way…you are losing your culture. Look around. You go through areas that didn’t exist ten or fifteen years ago”

[TRUMP'S BREXIT BLAST Donald Trump told Theresa May how to do Brexit ‘but she wrecked it’ – and says the US trade deal is off, By Tom Newton Dunn, July 13, 2018]

Whether Trump was referring to “areas” becoming “no go zones” for police or simply to the obvious, and staggering, transformation of great European cities, he had committed the cardinal sin of Noticing. Trump had concluded that mass immigration to Europe was “sad” since he inexplicably thinks preserving Europe’s historic nations is something worthwhile. And the Orange Man was probably thinking of his own country as well.

Bump wanted readers to know he had his thinking cap on, so he noted that while Trump was speaking about damage being done to “culture” in Europe, and since there are a number of European cultures, Trump probably meant—another gasp!—“Western civilization,” and that’s very bad, since what he really meant was “white culture.”

Those bad white people again. What the Phillip Bumps of the world believe is that “Europe,” as in the globalist E.U. project, is good. But “white people,” i.e. Europeans, have no intrinsic value of their own and are, in fact, bad. Since their “Western civilization” represents “white culture,” it also has no value.

What we have here, if I may dare Notice, is nihilism masquerading as “tolerance.” Europe as a concrete reality, built and maintained by European peoples, vanishes into the ether.

Trump, in his best honey badger mode, has been on a roll. His British trip followed his dressing down of our NATO allies for freeloading by not paying more for their own defense. He took particular aim at Germany, which is collaborating with Russia—NATO’s presumed enemy—in building a Baltic Sea natural gas pipeline that will increase Germany’s and Europe’s dependence on Russian energy (Germany, said Trump, was becoming “a captive of Russia.”)

Germany spends 1.2 percent of its gross domestic product on defense, while the U.S. spends 3.5 percent. Why?

Why—nearly three decades after the end of the Cold War, the collapse of the Warsaw Pact, the crack-up of the Soviet Union and the overthrow of the Communist dictatorship in Moscow—are we still defending European nations that collectively have 10 times the GDP of Vladimir Putin's Russia?

Buchanan went on to note that similar questions could be asked of South Korea and Japan. As far as trade, Trump’s “trade war” with China is of a piece with Trump’s America First instincts—and, like Trump’s comments at the NATO meeting in Brussels and in the U.K., has set globalist pulses to racing [Trade wars are damaging, so why is Trump fighting one with China? Nathan Bomey, Adam Shell and Paul Davidson, USA Today, July 13, 2018].

Trump was attending a summit meeting with Vladimir Putin in Helsinki, another indication that he is instinctively moving toward what James Pinkerton has correctly cast as ending the Cold War for good [How Donald Trump Just Ended the Cold War for Good, American Conservative, June 13, 2018]. Pinkerton, writing after Trump’s summit meeting with North Korea’s Kim, noted that the Korean War had “solidified much of the geopolitical architecture of the Cold War, notably the fundamental idea of a U.S.-led Free World alliance to contain communism,” and that Trump’s meeting with Kim (and his stated desire to eventually withdraw American troops from South Korea) signified “that an old era is finally ending.”

The Cold War, Pinkerton pointed out, had institutionalized arrangements that included

the idea that the U.S. should keep open, on a non-reciprocal basis, its domestic market for imports for Europe, Japan, and, yes, South Korea; such one-sided trade relationships were seen as a necessary component of the alliance-building process.

What Trump was doing, wrote Pinkerton, amounts “to a massive global game-change.”

Pinkerton mentions immigration in passing as well—immigration patriots should keep in mind that the Hart-Celler Immigration Act of 1965 was itself part of the Cold War “architecture” of the era. The propaganda aspect of the war was fought in ideological terms as a clash between Communism and Capitalism (“the free world”), a war of ideas, not of countries with concrete national interests and distinct peoples. Hart Celler, which opened the door to non-European immigration, was seen as an extension of the Civil Rights legislation of the era, itself used in Cold War information campaigns to counter Soviet anti-capitalist and anti-U.S. propaganda. Discrimination of any kind was seen as arming the Communists with useful propaganda points—a Western democracy discriminating against the colored peoples of the earth undermined the global anti-Communist line.

Universalist language in American political discourse wasn’t anything new, but the Cold War went a long way toward promoting America as an idea, not a real place or a people with national interests to defend.

When the Soviet Union collapsed, the Cold War was supposedly over. But instead of a “peace dividend,” what America got was, as Pinkerton wrote, “more of the same” as Western elites “doubled down,” despite the fact “that everything in the world had changed.”

A global elite spawned during the Cold War, bolstered by Cold War era ideological abstractions, had solidified its stranglehold on power in the Western world. The United States wasn’t exactly the leader of “the Free World,” but, rather, had become the seat of an expansive globalist project. The “military-industrial” complex had interests of its own, and peace wasn’t one of them. Globalist billionaires and the “Deep State” had become the not-so-hidden hands that manipulated “democracy” for their own ends. Ending the global “geopolitical architecture” that was established during the Cold War would be a direct, existential threat to their power.

Mass immigration is part of the global project that took root in The Cold War era. Donald Trump’s amazing native instincts have set him against that project. Trump is not a deep or consistent thinker. We can only hope that the views he has expressed concerning the foolishness of intervention in the Middle East will guide him as well. [Trump Slams George W. Bush: Invading Iraq Was 'Single Worst Decision Ever Made', Haaretz, March 4, 2018 ]

It’s all about one thing, Mr. President: America First. And what about that wall?

Dennis Petrov (email him) is a Russia specialist