Alt Right Not “Self-Destructing”—It’s Just Been Mugged By Government-Antifa Alliance. Establishment Conservatives Too, But They’re Too Stupid To Notice

The “Alt Right” is “self-destructing” according to the Daily Beast [Less Than A Year After Charlottesville, the Alt-Right Is Self-Destructing, by Kelly Weill, March 29, 2018]. Slavishly quoting hideous Heidi Beirich of the Southern Poverty Law Center and the $PLC’s questionable claims about the supposed rise of “hate groups,” Weil claims legal trouble is the key factor driving many Alt Right supporters out of the movement, dishonestly implying they brought this on themselves. But in fact what is happening is systematic government repression—politicized law enforcement is working in de facto alliance with violent Totalitarian Left to shut down peaceful dissent.

The catalyst for the Beast’s article: Richard Spencer’s  March 5th, 2018 attempt to speak at Michigan State University. The result was a bloody mess as protesters and would-be attendees clashed in the streets, resulting in many arrests.

Spencer argued this violence was contrary to his intention:

The college tour is not about pitched battles, it is about intellectual activity and, until something changes, I’m going to have to rethink how I do this… Antifa are going to do their thing, and if the campus police and the state police and the local police aren’t ultimately willing to open up a corridor [for Spencer’s audience to enter] then I don’t want to repeat Michigan [State]. (Emphasis added)

Disgracefully, the street fights were taken by ostensibly mainstream journalists as proof of the effectiveness of violent Antifa tactics. For example, Natasha Lennard at The Intercept crowed, “Is Antifa Counterproductive? White nationalist Richard Spencer would beg to differ, March 17, 2018]. She further made an all-but-explicit endorsement of expanded vigilante tactics: “If ‘alt-right’ speakers do go ‘underground,’ [i.e. hold meetings in private] where they will lack police lines and university establishment protections, Antifa will be sure to follow them there, too,” she wrote.

The retort is obvious: what “police lines and university establishment protections?” As in Charlottesville itself, the issue is not that the Right cannot protect itself—it did so very effectively in the Battle of Berkeley. It’s that the Right is not permitted to protect itself.

At Unite The Right, there would have been less violence and fewer injuries if the police had simply abandoned the city altogether and let UTR participants themselves guard the perimeter. Instead, police literally pushed combatants into each other and in what then Charlottesville police chief Al Thomas subsequently admitted was a deliberate attempt to cause chaos.

The same occurred at Michigan State—aptly described as a “mini-Charlottesville.” Video suggests Greg Conte, Richard Spencer’s colleague, was trying to separate dueling groups, essentially doing the police’s job for them. When he is confronted by a mob, the police are nowhere to be seen. However, when he asks them why police aren’t doing their job, Conte is swarmed by police and arrested and now charged, absurdly, with resisting arrest, among other things.

I posted an update to @Real_Greg_Conte's legal defense fund. He needs your help! Follow the link to donate: https://t.co/eFqbIq9rwV pic.twitter.com/iaKCvSiKE7

The center-right site Twitchy is attempting to portray these events as a kind of victory for mainstream conservatism: “The Daily Beast can’t paint all conservatives and right-wingers as the alt-right anymore,” it proclaimed [SWEET Schadenfreude! The Daily Beast TOTES confused that the alt-right really was JUST a fringe group, by Sam J, April 2, 2018].

This is ridiculous. The Respectable Right will continue to be called “racist” or “linked to white nationalists” until the fall of the Republic itself.

And Establishment conservatives should recognize the same kinds of tactics are already being used against them. Beltway Right organizations have complained for years about how even milquetoast speakers are essentially banned because of the threat of Antifa violence. Instead of protecting speakers, campuses attempt to charge conservative groups outrageous “security fees”—essentially penalizing conservatives and libertarians because of the actions of their opponents.  And it’s getting worse—ask Charles Murray, Heather Mac Donald, Christina Hoff-Sommers, and Ben Shapiro.

But this is precisely what has also happened to Alt Right events. Antifa create a dangerous situation and Leftist journalists blame the victims for showing up. Consider how Reveal News frames the pattern:

Alt-right rallies had drawn violence before the deadly August rally in Virginia. But afterward, members of the Antifa – a loose-knit anti-racist movement – increasingly started facing off against Spencer and his cohorts whenever they appeared in public. Those confrontations, as Spencer notes, have become increasingly violent, with campuses incurring hundreds of thousands of dollars in costs to provide extra security for Spencer and his team.

Saying “Alt-right rallies had drawn violence” is like saying those German women in Cologne had “drawn sexual assault.”

Most schools simply want to avoid trouble and generally try to evade conservative speakers, “Alt Right” or not. They only back down in the face of legal action.

But what if no lawyers are willing to take the case? The lawyer who enabled Richard Spencer’s Michigan State event, Kyle Bristow, left politics altogether after an intensive media campaign—and, sources tell me, Antifa threats against Bristow and his family. Bristow himself hints at this when he complains “there is a side to the story which the media is not telling”.  [Richard Spencer’s attorney leaves ‘ideas’ foundation, Detroit News, March 3, 2018]

For that matter, even President Trump is having a hard time attracting lawyers [An unheard-of problem: The President can’t find a lawyer, by Katelyn Polantz, CNN, March 28, 2018]. Some of this could be due to fears he would be difficult to represent as a client. However, as happened with the refusal of any major law firms to defend traditional marriage, many lawyers simply don’t want to become media targets for defending a client whom journalists want to destroy. Lawyers who represent those whom journalists consider “far right” become labeled “Far Right” themselves [No Counsel for White Men, by Gregory Hood, American Renaissance, November 28, 2017]. Of course, this is a collapse of the ethics that the profession has prided itself on since Patriot leader John Adams defended (successfully) the British soldiers accused of the Boston Massacre.

In contrast, thanks to groups such as  the longtime Communist front National Lawyers Guild, Antifa can be confident of having legal representation no matter what they do.

And the result is essentially that Antifa are allowed to do whatever they want.

Thus six defendants accused of rioting on President Trump’s Inauguration Day were let off the hook after receiving heavy assistance from a federal judge. It actually appears that, in our capital city, the U.S. justice system is going to fail to punish the Leftists who tried to shut down the Presidential Inauguration although they had openly bragged about their intention to disrupt it.

Similarly, In Charlottesville, a judge let Deandre Harris off the hook even after a video showed him deliberately swinging a weapon at an elderly man. 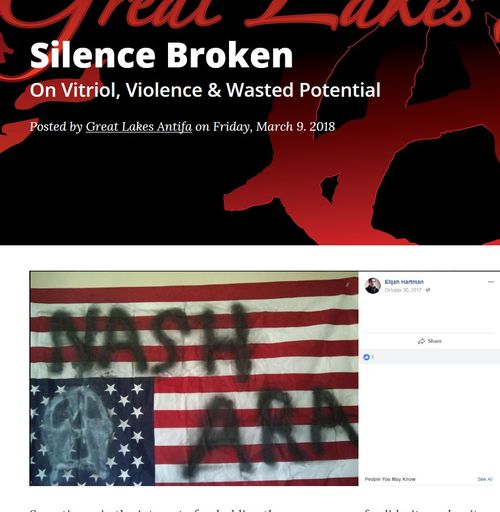 Indeed, it’s increasingly clear that Antifa is a brand for random acts of street violence in which thuggery for its own sake is justified with vague Leftist slogans. Antifa can’t even keep from beating each other up. According to a group calling itself Great Lakes Antifa, a member of its group was beaten by the member of another group based on accusations of being a “Nazi infiltrator.” (Those involved are referred to by letters in the blog post.

J&P, without consensus from the group, lured T to a secondary location where he was jumped and beaten by J with impunity.

We want to take a moment here to try to articulate the impact this had on the collectives:  Nashville Antifa had never drawn blood on a fascist to this point, and one of the elder members of the group had beaten a 20-year-old activist for a perceived crime with no evidence.

What they are complaining about? Isn’t beating up random people based on accusations of Nazism isn’t what Antifa is all about?

Bottom line: even under a supposedly patriot president, politicized police seem to be allowing Antifa violence and instead attacking the victims. Gleeful MSM reporter/ activists can credit Antifa with repressing the Alt Right, but the masked thugs themselves aren’t the ultimate threat. They are in effect serving as the paramilitaries for the local authorities, preventing events which the City Fathers don’t want to happen anyway.

Thus, the Alt Right is in the impossible situation where masked anarchists are given the protection of law and are coddled by the courts, but demonstrators who simply want to express increasingly popular views can’t even obtain counsel.

Ultimately, this raises the same question as does mass illegal immigration: Is this a country of laws or not?

And if the latter, why are only patriots expected to play by the rules?