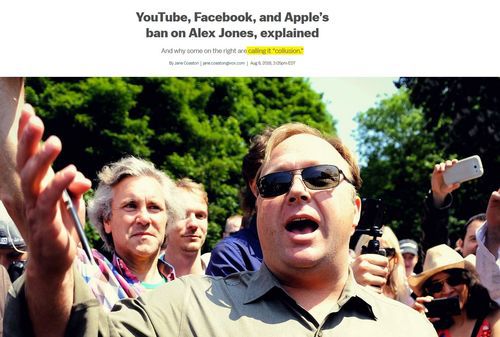 Vimeo CEO Anjali Sud, daughter of Indian immigrants, is the latest corporate Cultural Marxist to deny InfoWars’ Alex Jones the traditional Anglo-Saxon freedom of speech [Alex Jones flees to Vimeo, is immediately banned there as well, by Zack Ford, Think Progress, August 13, 2018). But it’s vital to note that this latest example of tech totalitarianism has nothing to do with Jones’ conspiracy theories—and everything to do with Jones’ belated emphasis to immigration patriotism. Bottom line: our Ruling Class is simply desperate to repress awareness of their Election of A New People until it’s too late.

The war on Alex Jones has been incredible to watch, with CNN dedicating multiple months to attack a humble Texan who started out doing a public access TV show in Austin in the late 1990s and ended up playing a major role in the 2016 election, hosting a 30-minute interview with then-candidate Donald Trump before the primaries began. [Donald Trump just did a big interview with a famous conspiracy theorist and was asked about impeaching Obama, by Colin Campbell, Business Insider, December 2, 2015]

Jones explored the official account of the 2012 Sandy Hook shooting and in February of this year called Parkland School student turned gun control crusader David Hogg a “crisis actor.” Supposedly this is not what got him de-platformed from Facebook, Apple, Disqus, Spotify, and YouTube, but rather violations of "hate speech" codes.  [YouTube, Facebook, and Apple’s ban on Alex Jones, explained | And why some on the right are calling it “collusion.”,  By Jane Coaston, Vox,  August 6, 2018]

Conspiracy theorist Alex Jones is quickly disappearing from the internet, though some accesses to his site Infowars is still available on the web.

After we inquired this afternoon about the Infowars company page, LinkedIn responded that it has removed the page from its platform.

"We have removed the InfoWars company page for violating our terms of service.

We value the professional community on LinkedIn and strive to create a platform where the exchange of ideas by professionals can happen without harmful misinformation, bullying, harassment or hate.

We encourage our members to report any inappropriate content or behavior. We investigate and if it is in violation take action, which could include removing the content or suspending the account."

Pinterest took down Infowars' page on Monday after multiple people flagged the conspiracy theory account to the company. Mashable first reported on the news.

"Consistent with our existing policies, we take action against accounts that repeatedly save content that could lead to harm," a Pinterest spokesperson said in an email statement. "People come to Pinterest to discover ideas for their lives, and we continue to enforce our principles to maintain a safe, useful and inspiring experience for our users."

The CNN-led intifada against Jones—as of this writing, CNN is still using its megaphone to demand Twitter ban Alex Jones from speaking to his 886,000+ followers—and his powerful InfoWars.com website (Alexa.com tells us the site gets 3.6 million monthly unique visitors and 25.6 million monthly pageviews, ranking 683 in nation and 3,475 globally for traffic) would have been unthinkable a few years ago, when Jones was interviewing celebrities such as Charlie Sheen about how 9/11 was an inside job—why did Building 7 collapse again?—and working to infiltrate and film the elite playground of Bohemian Grove.

Jones is not mainstream (he has under 25,000 Twitter followers), yet he has influence and is sometimes linked to by more influential media figures such as Matt Drudge.

As his fans know, Jones is different than just about anyone in his field. Neither conservative nor liberal (he describes himself as “a dedicated and aggressive Constitutionalist” on his own website biography), Jones spoke out against President Bush during his administration and is equally critical of President Obama (Jones sells a popular DVD titled The Obama Deception on his website). Via his websites prisonplanet.com, infowars.com and a formidable following on YouTube, Jones reaches countless viewers and listeners daily, with a virtual army of twentysomethings paying attention to what he says.[ More]

It would have been unthinkable because Alex Jones wasn’t a threat to the egalitarian cabal ruling Main Stream Media journalism, dictating what can and can’t be discussed.

Spend your time talking about whether a plane hit the Pentagon or not on 9/11 or if black helicopters are flying all around us ready to implement the New World Order (NWO) agenda, or what’s actually happening when the Bilderberg Group meet, and you run no risk of attracting the censors of the Powers-That-Be.

Alex Jones sending his audience of disaffected, socially awkward white males down the rabbit hole of conspiracy theories, from what happened at Sandy Hook to what really transpires during the rituals at Bohemian Grove, represented endless distractions for otherwise highly intelligent people, occupying their mind while simultaneously reinforcing the notion they are powerless against the omnipotent NWO.

But there’s a ceiling for conspiracies. Alex Jones’ truly explosive growth, leading to his hosting Trump on his show, was tied directly with his taming down the conspiracy theories and embracing the National Question—the consequences of mass non-white immigration into the USA, the migrant/refugee invasion of Europe and the crime it creates, as well discussing the consequences of black-rule in South Africa for the white minority.

Take Alex Jones’ long-time collaborator Paul Joseph Watson, who in 2003 published a book on 9/11 conspiracies (Order of Chaos: Elite Sponsored Terrorism and the New World Order). Today, Watson has more than 900,000 followers on Twitter, and more than 1.3 million subscribers on YouTube for videos almost entirely dedicated to showcasing what mass nonwhite immigration has done to Europe, the consequences of white guilt/Western altruism, and a never-ending battle against Political Correctness that few in Conservatism Inc. would dare replicate. Here’s some examples of Watson’s videos, the majority of which have well over one million views:

The Charlotte rioting was a BLM riot in Charlotte, NC in 2016—John Derbyshire commented on it here. Watch it below:

Watson’s videos are cheaply produced, short and incredibly effective. Utilizing social media platforms to promote these insightful, funny, and devastatingly anti-pc videos, he’s built a following and has a reach far, far beyond anything he could have ever imagined when he wrote Order Out of Chaos back in 2003.

Alex Jones’  banning is clearly the precursor to the push to ban more and more Politically Incorrect patriot sites from social media…such as VDARE.com.  CNN let slip the goal when Pakistani journalist Rafia Zakaria [Tweet her] said: “The stripping of InfoWars from Facebook, Apple and other platforms is an important step in the recognition of nativist, nationalist and white supremacist hate speech as a form of terrorism.” [We need to talk about Alex Jones, CNN, August 10, 2018.

Social media must be sanitized because professional journalists have already answered the National Question. In their eyes, white people must not be allowed to discuss their displacement in Europe or notice what’s happening via massive immigration into the USA.

What scares them the most—and is the reason behind the CNN crusade against Jones—is this: Alex Jones was once a useful idiot for the elite, utilizing his radio show and website to discuss conspiracies that, in the end, don’t matter and worse, leave his listeners powerless to change their fate. But the election of Donald Trump showed us that when Alex Jones switched gears and focused on the National Question, his army of listeners were powerful enough to change history.

This is why they targeted Alex Jones: because he was motivating millions to get involved and challenge the open conspiracy of the Ruling Class and corporate journalists to—paraphrasing Barack Obama—fundamentally transform America.