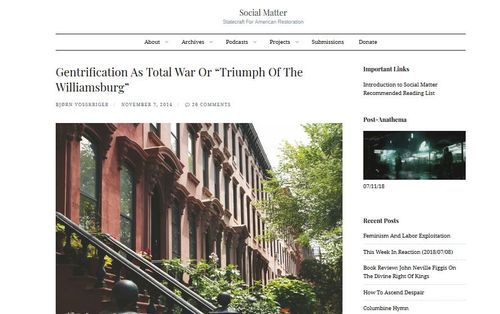 Not since their universal clamor for the Iraq War has the Main Stream Media been so uninteresting. The Washington Post, The New York Times, and MSNBC have been talking about Oval Office drama, Russian spies, and James Mueller (or is it Robert Comey?) for over a year now, in a seeming attempt to only discuss matters that don’t interest or affect me. Recent additions to the menu have proved even less interesting and impactful: the opinions of rapper Kanye West. Meanwhile, much of the pro-Trump media amounts to little more than uncritical cheerleaders, blindly supporting strikes against Syria or developing comforting conspiracy theories as to why Roy Moore lost the Alabama special election. In between, #NeverTrump Republicans continue prattling on about how President Trump is a travesty, and how the GOP needs to view George W. Bush as its exemplar role model.

With the liberal elitist legacy media hunkering down, the #NeverTrumpers yelling at the moon, and American Greatness devolving into petty partisans, what are American nationalists to read? (Aside from VDARE.com, of course.) My personal recommendations (in alphabetical order, to ensure fairness): This publication is admittedly uneven, sometimes deviating into criminally orthodox opinion, such as its recent foray into defending the legacy of Christopher Hitchens. [What Would Christopher Hitchens Say?, by David Masciotra, January 10, 2018; and Christopher Hitchens Wouldn’t Be Welcome at The Atlantic Today, by Christian Alejandro Gonzalez, April 18, 2018]. However, TAC’s foreign policy coverage is excellent, particularly that by Daniel Larison (making the defenses of Hitchens even stranger). And most importantly, it has Rod Dreher as a near-constant blogger. Mr. Dreher is often attacked from the Right for being too Christian, too colorblind, and too anti-Trump, but defining him by those three traits misses many of his virtues. With a foothold in the mainstream, the man openly talks about having read and profited from the classic race realist novel Camp of the Saints,  the societal scourge of pornography, and he regularly attacks anti-white racists. [See, for example, The Left’s Anti-White Racism, December 23, 2015; Texas College Op-Ed Calls For Ethnic Cleansing, November 30, 2017; Hating Whitey At Stanford, March 10, 2018.]

The Left has noticed all of this, and have set their sights on him because of it. If I were conspiratorially minded, I would say plenty of Leftist journalists are waiting for an opportunity to make him into an example, like John Derbyshire and Jason Richwine. The increasingly popular Leftist podcast Chapo Trap House, for example, regularly smears him as being nothing but a bigot. Sarah Jones, of the increasingly left-wing New Republic is blatantly campaigning to get Dreher fired.

Let he who has ears to hear, hear: Rod Dreher's racial politics are very, very bad and they have been for a long time. https://t.co/RZfGbF0nuM

Camp of the Saints literally depicts white genocide at the hands of evil immigrants. Dreher thinks it raised some good points. That should trouble anyone with a conscience.

And she’s not the only one:

Below is an excerpt from Rod Dreher, a Christian and author of “The Benedict Option: A Strategy for Christians in a Post-Christian Nation.” It is now even clearer why Dreher sees separation as the best option.
https://t.co/N2MKUZn5Wv pic.twitter.com/HKpo0tVZPQ

Vox’s  Zack Beauchamp in a now-deleted tweet, is suspicious that Dreher may go “full alt-right.”

Rod Dreher’s acceptability in the mainstream is something of a weathervane. He also actively reads and considers what is said in his comments threads. Those two facts alone are reason enough to keep an eye on him.

TAC was co-founded by Patrick J. Buchanan (a fact now mentioned nowhere on its website), and still carries his column. VDARE.com Editor Peter Brimelow wrote for TAC’s first issue. But its record on immigration is mixed, and the subject is clearly no longer a priority, if it ever was. 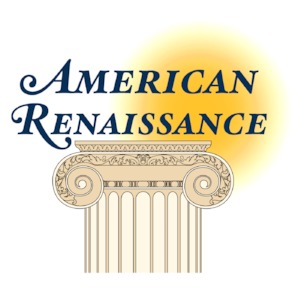 The best explicitly pro-white American publication ever. Importantly, it is not obsessed with President Trump, and regularly reports on crime, biological discoveries, and anti-white bias wherever it is found. Recently it brought on Gregory Hood as a staff writer, who in my opinion is the best Dissident Right writer alive today, and feature a weekly podcast with Paul Kersey, whose blog (Stuff Black People Don’t Like) is still going. AmRen is excellent on immigration.

Launched in 2014, SM put under one roof many of the disparate bloggers and strains of thought in what was then being called “neoreaction” and sometimes “the dark enlightenment.” Its high tone and jargon can take a bit of getting used to, but its unique perspective is invaluable—Arthur Jensen’s race realism with James Burnham’s understanding of power structures with Carl Schmitt’s will to power. In short, they are the Counter-Enlightenment thinkers of our era. They have recommended introductory reading here, but I recommend starting instead with Gentrification As Total War Or “Triumph Of The Williamsburg” by Bjørn Vosskriger. Their immigration discussion is also pretty strong—see Population vs. Civilization Replacement Ryan Landry March 19, 2017.

Similar to Social Matter, but with more bite, more religion, and a greater focus on horse race politics. For readers of VDARE.com who know Chronicles magazine, Thermidor is not unlike it, but with less esoterica and punching right. Its two shining stars are founder PT Carlo and regular contributor Jake Bowyer. For a taste of its insight and its polemics, I recommend starting with There is No End by Jake Bowyer, and Revolution and Pussy: The Sam Kriss Story by PT Carlo.

While both Thermidor Magazine and Social Matter are uniformly opposed to immigration, both leave their position on the matter largely implicit and focus on more metapolitical and spiritual topics.

These are the publications I read regularly without fail. However, I think it is essential for a healthy mind to always be wandering a bit. So I do periodically check in on popular Leftist websites, and encourage you to do the same.

As I noted in Counter Currents last year: “At their best, Leftist thinkers are unmatched in their ability to detect, explain, and belittle systems of power. Fundamentally, that is the goal of the left: to “deconstruct” hierarchies they find immoral, for one reason or another... leftists are now and again proving quite useful in their examinations of many of the power structures that do us reactionaries no good either.” [A Short Guide to Reading Left, August 9, 2017].

While there is not one specific outlet I can claim is always good, or always interesting, below are three excerpts of contemporary leftists at their finest

When the nature of work changes, companies reward new ways of feeling about it. The rise of white-collar work in the 1950s birthed the risk-averse organization man, whose highest values were loyalty and orderly conduct. The deregulation of the 1980s made virtues of aggression and ruthless competition. The new economy is characterized by instability and disruption; its ideal worker is calm in the midst of it all, productive and focused. The mindfulness training his company offers isn’t so much a perk as it is the means of turning him into a new type of person.

The trend described above applies not just to overworked employees, but all of the chaos and disintegration that come with diversity.

The [Democratic] party has established a clear line on the white wage-earning class: they’re all either dying (demographically or literally), irrelevant in an increasingly nonwhite country, or so hopelessly racist they can go off themselves with a Miller High Life-prescription-painkiller cocktail for all they care… The problem with this line is not just that it’s gross and elitist — it’s that it’s not even true.

[Burying the White Working Class, by Connor Kilpatrick, Jacobin, May 2016. Link in original]

If nothing else, this sort of essay can be very useful to cite when you are arguing with someone who will freak out if you cite an essay from American Renaissance or VDARE.com.

Why has the oppressed proletariat not come to its senses and joined you in your fight for world liberation? Perhaps, after years of struggling to educate them about their victimhood, you have come to blame them for their condition. They must want to be ground under the heel of capitalist imperialism; otherwise, why do they show no interest in your political causes?

This should be mailed to every Marxist professor out there, perhaps daily.

Whichever of these three quotes sticks out to you is where I would tell you to start reading to get your daily dose of the Left.

But a warning: Samuel Gompers is still dead. The 2016 Democratic presidential candidates’ ignominious failure to address the economic impact of mass immigration on the working class is paralled by these Leftist intellectuals—whether because of funding sources or peer group pressure.

When it comes to right-thinking publications, it doesn’t get better than The American Conservative, American Renaissance, Social Matter, Thermidor Magazine, and of course, VDARE.com!

Nathan Doyle is a Middle American Radical and occasional polemicist.