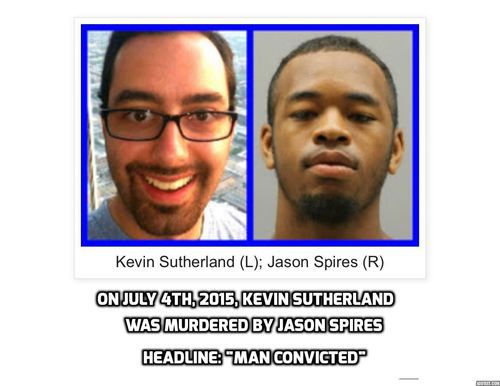 Kevin Sutherland’s Body Lies A-Mold’ring In The Grave, But His Twitter Feed Goes Marching On

Kevin Sutherland is dead. And he has been for three years now. If the name sounds vaguely familiar, it’s because his death was a bit of a news blip. On July 4th, 2015, Sutherland was killed by a random black thug on the metro in Washington, DC. The metro was packed with people, but no one stopped to help him as he was stabbed over thirty times. [ Bystanders Didn't Confront Killer On Metro Train, What Would You Have Done?, by Petula Dvorak, Washington Post, July 9, 2015 ]

There was a real irony to it all. Sutherland was exactly the kind of guy who would berate you for talking about black-on-white crime. By the age of 24, he had graduated from American University, one of the most liberal colleges on the East Coast. Like so many students at American, he used the place to springboard himself into politics. He interned for Democratic Congressman Jim Hines, and then moved on to become a digital strategist at New Blue Interactive, a fancy Leftist campaign consultancy group with an impressive client list.

Politics aside, doing all that before you turn 25 is not easy. Politics is a crowded field, and Washington DC is an expensive and cutthroat town; no pun intended. Sutherland was clearly a very capable and hard-working guy.

After Sutherland died, James Kirkpatrick pointed out that his Twitter was still up. Not only that, but the tweets still lingering were all about as clichéd and snotty as Leftist tweets get. Some samples:

I am confident that Sutherland was the kind of guy who would have taken take special relish in belittling VDARE.com and its readers. Indeed, he would have been willing to mock anybody who expressed fear about the randomness and brutality of black violence.

Now he is dead, and what is much worse, he is forgotten. (His killer was finally sentenced—but not to death—well over two years later). [Man sentenced to 35 years in fatal stabbing aboard Metro  train, by Keith L. Alexander February 9, 2018]The Powers That Be apparently feel that victims of Politically Incorrect crimes are best not remembered.

Incredibly, after three years, Sutherland’s Twitter account is still up and public. But the last tweet he sent out when he was living is not the last tweet on his feed. In August of 2017, Twitter automatically began sending out a weekly tweet that summarizes your activity for the last seven days. Since Sutherland was not alive to opt-out of this feature, it is still going—though it recently changed to once every two weeks.

It could be said that Sutherland was dutifully laboring for the political goals of the Leftist tech elites, died in the line of duty, and then said tech elites could not even be bothered to close down his social media after the fact. Perhaps that’s the 21st century equivalent of not closing the eyelids of the dead.

I am confident that New Blue Interactive is doing fine without him as well. As noted earlier, politics is a crowded field, and a new eager millennial surely came along quickly to take Sutherland’s place—it could well have been another American University graduate. The same goes for the office of Congressman Jim Hines. [Dem Rep. Himes: Nobody Wants To Take Away Guns, We Just Want To Be Like Australia, Canada & Great Britain, By Ian Schwartz, RealClearPolitics, February 19, 2018]

Sometimes I think about going on to Twitter and messaging Sutherland, or replying to some of the automated tweets that Silicon Valley is artificially sending out on his behalf.

I could write, “Hey Kevin, I know we viewed the world really differently, but I am genuinely sorry you got killed in one of the worst ways imaginable.”

It could get a little confessional, “Hey Kevin, writing about you, and the way that you died is politically expedient for me, and highlights my world-view. I am sorry you died, nonetheless."

Or I could advise, “Hey Kevin, have you ever read Guy de Maupassant’s masterpiece Boule de Suif? There is a lesson in it for you.”

Maybe I could challenge him and inquire, “Hey Kevin, what would you have said if I had died the way you did? What if it had been Jared Taylor?”

Of course, I could be nasty and partisan about it too, noting, “Hey Kevin, gun control would not have saved your life.”

I have yet to do any of this. It is a little too morbid—and social media has a knack for bringing out the worst in even good people.

The situation makes me think of the lyrics from an old Crass song:

You romanticise your heroes, quote from Marx and Mao

Well their ideas of freedom are just oppression now

You romanticise your heroes, and quote your Coates

Well his ideas of freedom want to slit our throats

But that may not be the best note to end on. So Kevin, if you can read this: I know we viewed the world really differently, but I am genuinely sorry you got killed in one of the worst ways imaginable.

And @Jack, for the love of God would you take down the guy’s Twitter?