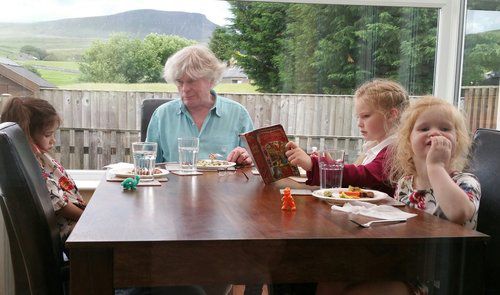 NO, William The Conqueror Did NOT Have A Black Advisor. SJWs Are Just Rewriting English History (Sound Familiar?) 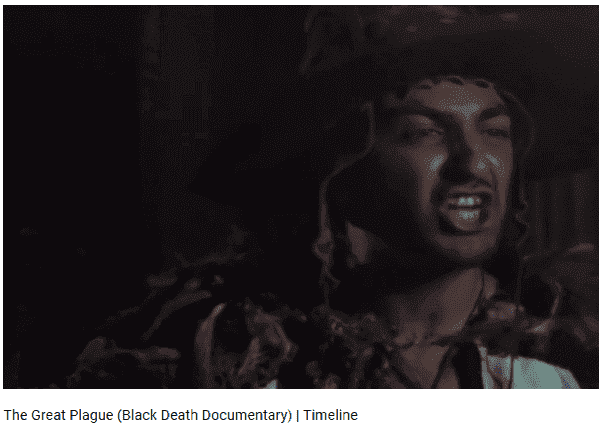 Rewriting a country’s history to change how its people see themselves is the bread and butter of any of aspiring totalitarian regime. Last year, attempts were made to normalize Prince Harry’s marrying the half-black Meghan Markle by resurrecting the tenuous claim that King George III’s Queen Charlotte (1744-1818) was part black, despite the record clearly stating her (thirteenth century!) ancestress was a “Moor” [Will Meghan Markle be Britain’s first mixed-race royal?, The Week, December 4, 2017] a.k.a. dark white (“Moor” can mean Arabs or Berbers—but not Negro). Sometimes it’s achieved more subtly, through slow-drip unconscious persuasion: The South Asian extra (right) playing a religious fanatic in one of the re-enactments in a BBC documentary about the Great Plague of 1665 [The Great Plague, Timeline, 11:37]; the black extra playing  William the Conqueror’s military adviser in a BBC documentary on the year of the Battle of Hastings [1066: A Year to Conquer England, Episode 1, 16:13]. But when it comes to the genetic origins of the native English, things get more difficult because there’s actually hard science involved.

So the presentation of this science is now heavily manipulated to promote the idea that England is an “immigrant nation” or even that the first English people were black. However, new breakthroughs are making even these lies increasingly difficult to sustain.

In the mid-nineteenth century, it was taken for granted that English were descendants of the Anglo-Saxons, who colonized the country around the fifth century A.D. and pushed out the native Celts, leaving them only with Scotland, Wales, Ireland and Cornwall. The clue was very much in the name, with “England” meaning “Angle-land.”

The Anglo-Saxon era was very fashionable in the nineteenth century. At a time of breakneck industrialization, pre-Conquest England was romanticised as a simpler, more trusting time of social equality, oneness with the soil and belief in the Old Gods. It was the escapist culture of the “plain folk,” kept alive in village Maypoles, Morris dancing and white magic. Anglo-Saxon Christian names were revived, with increasing numbers of Ethels and Alfreds and statues were erected of King Alfred the Great, such as in the centre of Winchester.

The fact that a significant portion of English people had French-sounding or locative surnames (after the manor their Norman progenitor feudally held) was conveniently forgotten. It didn’t help an ideology of blood-based English nationalism. So it was dismissed as the last “invasion” of England (in fact by astonishingly few Normans—they were just very aggressive), which had remained stable ever since. [The Victorians and the Ancient World, By Richard Pearson, 2006]

However, a hundred years later, towards the end of the twentieth century, it was this ideology that had become itself the problem for Britain’s new Cultural Marxist elite. The past needed to be completely rewritten so that it was perfectly normal for England to include, at that time, at least 10 per cent of the population who were South Asian, black or of otherwise recent immigrant descent. Accordingly, antiwhite organizations like the BBC and the Guardian began to conveniently unearth evidence of the occasional non-white living in Roman Britain [Black people have had a presence in our history for centuries. Get over it, By David Olusoga, The Guardian, August 13, 2017] or Tudor England [Britain’s first black community in Elizabethan London, BBC News, July 20, 2012], grasping at the chance to dishonestly present this as though it wouldn’t have been comment-worthy at the time. And they claimed that that the mass migration of non-Europeans into England since the 1950s, and especially since 1997, was comparable to the minuscule earlier migrations of Vikings, Normans, and a few thousand French Huguenots [A nation of immigrants: The 10,000-year history of Britain as told by your DNA, By Steve Connor, Indy 100, 2015]. They even ran a TV series in which they gave DNA tests to patriotic celebrities and (misleadingly) stressed the extent of their foreign ancestry, forgetting to emphasise that everybody has foreign ancestry if you go back far enough [So you think you’re English? By Andrew Graham Dixon, Daily Telegraph, November 5, 2006]

Unfortunately for the Social Justice Warrior Ascendancy, at the beginning of the 2000s new genetic evidence unveiled a very serious problem for this Nation of Immigrants mythmaking. Oxford University geneticist Bryan Sykes brought together the growing body of genetic evidence and concluded that the influence of Saxons, Vikings and Normans (let alone other immigrants) on the English gene pool had been very small indeed. English people were, pretty much, genetically the same as the Celtic peoples they’d supposedly displaced and they were certainly more similar to the Celts than their linguistic cousins in the Netherlands or Germany. And these Celts, he found, had merely adopted the culture of the invading Celts. They'd actually been in England since the Mesolithic. The English were somewhere in the region of 15% non-Celtic, a bit higher in the south and a bit lower in the north [Saxons, Vikings and Celts: The Genetic Roots of Britain, By Bryan Sykes, 2007].

These Saxon, Viking and Norman genes tended to be on the Y-chromosome, which made complete sense. Gangs of male invaders had entered England, taken over parts of or all of it and interbred with the local girls. Females, being genetically predisposed to be attracted to status and wealth in males (because these qualities mean they and their offspring will be better looked after) were likely perfectly happy to caste off their co-ethnic boyfriends in favour of these powerful invaders [The Evolution of Desire: Strategies of Human Mating, By David M. Buss, 2016].

The English language spread through the Celts simply imitating the dominant culture, with the remnant Celtic aristocracy adopting Saxon mores. Cerdic, first known Saxon King of Wessex (519-534) had a Celtic name, so was likely at least half Celtic.  Sykes also stressed that there was no significant genetic relationship between the Celts of the British Isles and those who spread to the southeast of Europe.

Recently, however, this Great Britain-promoting model that the English are basically Celts has come under attack from two fronts, with one of them having some scientific integrity. The first was a Channel 4 documentary plugging a study which found that one of the most ancient skeletons ever found in England - Cheddar Man who lived about 10,000 years ago - would have had very dark skin and curly black hair [First modern Britons had ‘dark to black’ skin, Cheddar Man DNA analysis reveals, By Hannah Devlin, Guardian, February 7, 2018,  ]. Typical of MSM propaganda, this skin coloration conclusion was more than the evidence would bear, and (again) Cheddar Man was certainly not negroid. But darker skin in itself would actually be unsurprising, because light skin developed as an adaptation to agriculture only about 10,000 years ago.

Farming’s concentration on a single crop, and the population explosion it permitted, meant that people were no longer obtaining the Vitamin D which they once did from a more diverse diet. Paler skin and lighter hair, allowed them to absorb this from the sun [The 10,000 Year Explosion, By Gregory Cochran and Henry Harpending, 2010] But of course this finding was used to discredit the idea that England is a “white” country.

However, even the most casual investigation into the genetics reveals that the Celts invaded Britain between about 1200 and 500 BC, with almost 100% of Welsh people carrying the tell-tale r1b variant on their Y chromosome. The population that Cheddar Man came from, and even those who built Stonehenge, was almost entirely replaced; pretty much wiped off the English map. (This, by the way, is a revision of Sykes’ thesis, which assumed more continuity). 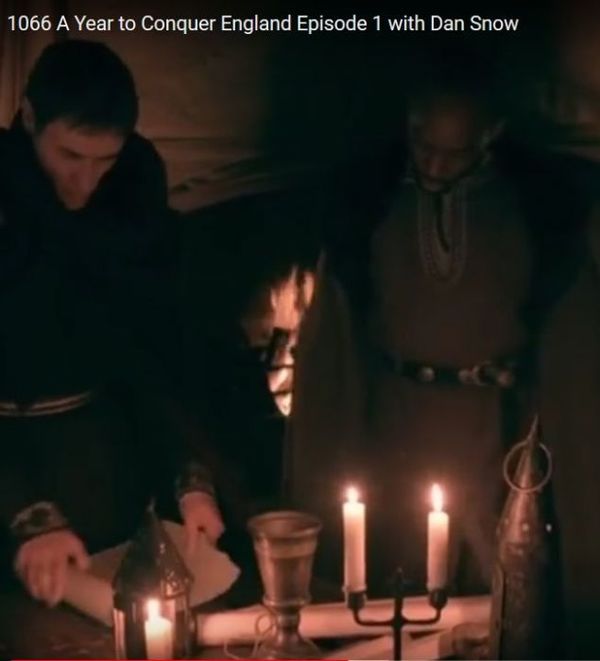 The second finding – the one with scientific integrity – was revealed in 2015. The English were not quite as Celtic as had appeared. They were between 10% and 40% non-Celtic; for the most part Saxon. [The fine scale genetic structure of the British population, By Stephen Leslie et al., Nature, March 2015]Accordingly, especially in the south and east of England, there was a degree to which the Celts really were pushed westwards. There was a significant extent to which the population of southern cities, such as Winchester, really were Anglo-Saxons. And the northern English, those whose ancestors lived under Danish rule between about 800 and 954, were clearly genetically distinct from the southerners, something which might help to explain England’s North-South divide even today.

England, it seems, is neither an “immigrant nation” nor a Celtic one. It is an Anglo-Celtic nation—something with which the “British” Empire-building Victorians would likely have been perfectly happy.

And it is a truth should make everyone in Britain beyond suspicious of any organization that represents an 11th century English king as having had a black adviser.