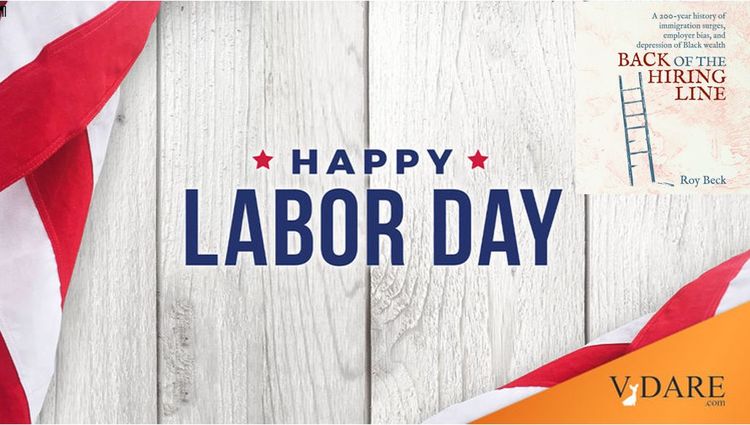 It is now more than 20 years since I started doing a Labor Day column for VDARE.com. This year, I want to recognize NumbersUSA founder Roy Beck’s book Back of the Hiring Line: A 200-Year History of Immigration Surges, Employer Bias, and Depression of Black Wealth, which we’ll be discussing in the VDARE.com Book Club later this month.

One hundred fifty years after the end of slavery and nearly 60 years after the passage of the civil rights laws of the 1960s, average Black household wealth in the 21st century remains a fraction of the median assets of other racial, ethnic, and immigrant populations.

There are many reasons, but this book is about one: two centuries of governmental encouragement of periodic sustained surges in immigration.

Here is a grand sweep of the little-told stories of the struggles of freed slaves and their descendants to climb job ladders in the eras of Frederick Douglass, W.E.B. Du Bois, Marcus Garvey, A. Philip Randolph, Barbara Jordan, and other African American leaders who advocated for tight labor migration policies. It is a history of bitter disappointments and, occasionally, of great hope:

All this is true: VDARE.com editor Peter Brimelow wrote it up in Alien Nation in 1995, black congresswoman Barbara Jordan wrote it up in the Jordan Commission report in 1997, and I’ve written it up myself in here in Labor Day Lament: Where Have You Gone, Samuel Gompers, Dennis Kearney, Cesar Chavez, A. Philip Randolph?  in September 2007.

Most recently, Ann Coulter wrote it up in They’re Replacing YOU, Black America! in May.

They're Replacing YOU, Black America! -@AnnCoulter

For decades now, black professors, the U.S. Civil Rights Commission and ordinary African Americans have been pointing out how immigration hurts them. Democrats don’t care.https://t.co/cnQUAEJP04

Historically, the post-Civil War immigration that we call the Ellis Island Era meant that jobs in New York and the industrial Midwest that could have gone to newly freed blacks went to Italians and Central Europeans. Similarly, the 1965 Immigration Act, happening just after the Civil Rights Act, also took jobs away from blacks.

Black workers are “hardest hit” by immigration in the familiar cliché, because they’re hardest hit by everything that affects Americans. (We have a tag called Immigrant Displacement of Black American.)

However, Peter Brimelow, who bought and listened to the audiobook version of Beck’s book, says that as far as he’s concerned, the fundamental economic analysis has not changed since he outlined it in his much-denounced 1995 book Alien Nation—and that it also applies to white Americans.

In response, our blogger Anonymous Attorney asked What About Immigration’s Effect On The Majority?

A half-hearted congratulations to the Washington Post for noticing that black Americans are hurt by immigration [See Patrick Cleburne’s Can Only Hispanics Do Yard Work?]. Though it’s with great disappointment that we realize how this story came to see the light of day. According to well-established journalistic standards, something that hurts Americans generally is not news. Something that hurts white Americans generally is certainly not news. But if black Americans—or any other protected-status group—is hurt, then by God, it’s news. Someone should be pressing the Post—and the rest of the MSM—on why whites as a group never merit coverage, except as un-quoted backdrops responsible in some vague way for all that plagues the world.

Well, we’ve got the most recent numbers on immigrant displacement of all native-born Americans, which we’ll write up in a National Data column after Labor Day.

Probably emphasizing blacks was the only way Beck could get an immigration-critical book published today. But like Anonymous Attorney, I think that the effect of immigration on the Historic American Nation—which built America, fights its wars, and pays the majority of its taxes—is as important as its effects on blacks, who in their own way were, perhaps against their will, the pre-Civil War immigrants who displaced free white workers.

And that’s why we’re still working away at VDARE.com—because you’re not going to hear that anywhere else.