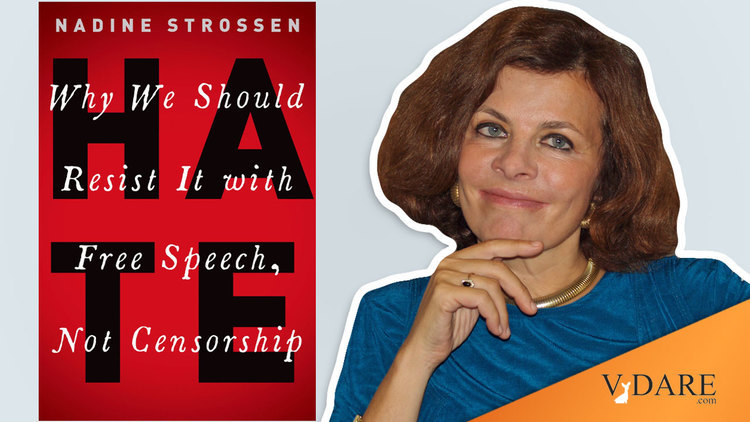 Earlier: ANN COULTER: “Sorry I Murdered You With My ‘Hate Speech’”

In both her Substack video interview with Ann Coulter, and her book HATE: Why We Should Resist It With Free Speech, Not Censorship, former ACLU head Nadine Strossen says that blacks are frequently the victims of hate speech laws, which are always intended (by white liberals) to suppress white speech.

Making both my point and hers, Strossen says that wherever hate speech laws have been tried, it’s the “marginalized”—not the “oppressors”—who get nailed.

Duh. People who think it’s cool to publish books with titles like Why I’m No Longer Talking to White People About Race don’t exactly exude sweetness and light when talking to actual white people.

Thanks to the University of Michigan being forced to release documents in response to an ACLU lawsuit challenging its “hate speech” code in the late 1980s, Strossen reveals that, during the brief time it was in effect, more than 20 cases were brought against black people for racist speech.

Here‘s what Strossen has to say in her actual book:

The University of Michigan code was in effect from April 1988 until October 1989, when it was declared unconstitutional in a lawsuit brought by the ACLU. Because of the lawsuit, the university was forced to disclose information about how its code had been enforced, information that otherwise would have been unavailable to the public. Even during the short time that the Michigan code was in effect, there were more than twenty cases of whites charging blacks with racist speech. In only two cases was speech punished on the ground that it was racist, in contrast with being discriminatory on other grounds. And in both such cases, the punished speech was communicated by or on behalf of black students. In one case, a black student was punished for using the term “white trash” in conversation with a white student. The second case arose from a faculty-led small-group discussion at the beginning of a preclinical dentistry course to “identify concerns of students.” One student said that he had heard, from his minority roommate, that minority students had a difficult time in the course and were not treated fairly. The faculty member, who was black, complained that the student was accusing her of racism.

Moreover, the only student who was subjected to the burden and stigma of a full-fledged formal disciplinary proceeding under the Michigan rule, as opposed to a more informal resolution process, was an African-American social work graduate student accused of homophobic and sexist expression. The charges stemmed from a research class, in which the student conveyed his belief that homosexuality is a disease and that he intended to develop a counseling plan for changing gay clients to straight, a view that spurred heated debates with his classmates. In seeking clemency for the punishment that was imposed on him after the hearing, the student asserted that the charges were “pretextual” and that he had been singled out because of his race, as well as his political views. He wrote that the complaining students “knew that a black student would have no chance of winning a favorable decision against such charges. These charges will haunt me for the rest of my life. . . . [T]‌hey will be used against me to prevent me from becoming a certified Social Worker.”

There aren‘t any footnotes in Ms. Strossen‘s book, but the source of some of the Columbia experience with blacks and hate speech can be found in her June 1990 Duke Law Review article Regulating Racist Speech on Campus: A Modest Proposal.

The reason blacks are “hardest hit“ by these regulations is that blacks are more hateful than whites, less guarded in their speech, and culturally more homophobic.

They generally have no shame over hating whites, and are more likely to come from lower-class families.

For example, black actor Isaiah Washington lost a job on the hit show Grey‘s Anatomy and was sent to treatment after calling another actor a “faggot“ on the set [Actor Isaiah Washington ‘lost everything’ after calling a gay castmate ‘faggot,’ by Aaron Day, PinkNews, September 16, 2013].  (When Ann Coulter referenced this in a speech about John Edwards, everyone acted as if she was seriously accusing Edwards of being gay.)

However, in general, the fact that blacks are “hardest hit“ by hate speech codes—which are intended, as I said, to suppress white speech—is the same reason they‘re “hardest hit“ by gun control laws, campus “sexual assault“ codes, speeding tickets, or for that matter, the death penalty: because their  behavior is statistically worse.

So while blacks are the unintended victims, it would be nice if Ms. Strossen could have some sympathy for the intended victims—people like us here at VDARE.com, or Donald Trump, or even Ann Coulter, who has frequently been attacked for “hating“ people the MSM loves.