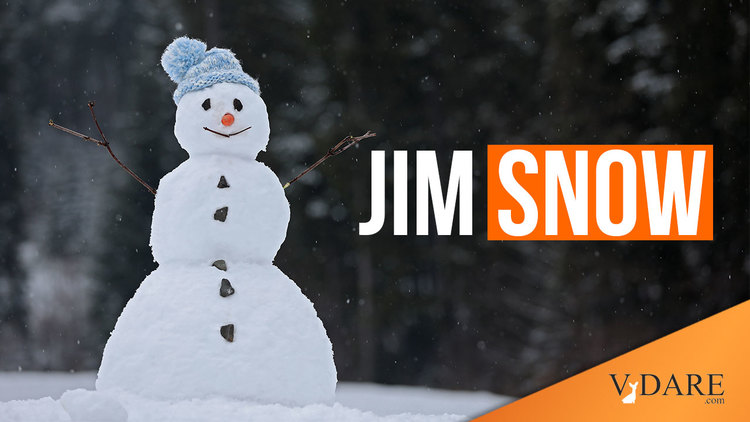 From Jim Snow To The White Genocide Project

The judicial lynching of white police officer Kim Potter, in contrast to the complete failure to charge the black cop who killed Ashli Babbitt, is just the latest evidence: for over 60 years, the Historic American Nation has been in a one-sided civil war. Now the U.S. is showing unmistakable signs of morphing into an anti-white totalitarian state.

Since its founding on Christmas Eve 22 years ago, VDARE.com has documented (with some help from me) the ruling elites’ relentless legal disenfranchisement, economic dispossession, and what amounts to a technical  genocide of White Americans. For years, I’ve been calling this Jim Snow America—the reverse of the much-denounced Jim Crow laws designed to contain black criminality—but I think we’ve since moved on to the White Genocide Project.

As regards National Question issues—race and immigration—both parties have for generations been treasonous. As left libertarian New York journalist Sidney Zion (1933-2009) used to say, “It’s the two parties against the people.”

Today, white American patriots—aka the Historic American Nation—find themselves a nation of prisoners, while black and Hispanic criminals, and their white accomplices (“allies”), rule the roost.

In one of Lawrence Auster’s  three brilliant, early-to-middle 1990s booklets, he observed that the 1964 U.S. Civil Rights Act reduced white Americans to second-class citizens, and the Hart-Celler Immigration Act the following year reduced them to third-class citizens. By now, patriotic whites must be fifth-class citizens, after homosexuals and sexual psychopaths.

Many people act as if “Wokism”  and so-called “critical race theory” were only a few years old. But these movements have been developing for over two hundred years.

Modern Communism goes back to the 1840s under Marx and Engels.

Feminism goes back to the 1848 Seneca, NY conference organized by Elizabeth Cady Stanton, Lucretia Mott, Mary M’Clintock, Martha Coffin Wright and Jane Hunt. Feminism as we know it was founded by Stalinist Betty Friedman, better known as Betty Friedan (1921-2006), with her 1963 work, The Feminine Mystique.

The Communist takeover of college schools of education was completed so long ago that already during the 1930s, socialist John Dewey (1859-1952), America’s most influential philosopher and education thinker, felt obliged to write a booklet, Experience and Education, in 1938, condemning Reds who claimed to speak in his name.

Just three years after the Historic American Nation had saved civilization in the Second World War, the U.S. Supreme Court declared war on that nation, ruling in Shelly v. Kraemer (1948) that covenants forbidding a property owner from selling to members of certain groups were unconstitutional.

In 1954, in Brown v. Board of Education, SCOTUS claimed to use “sociology” to make its ruling, tossing aside precedent and the U.S. Constitution, in ruling racially segregated schools “unconstitutional.”

After years of Red creep under President Franklin D. Roosevelt (1882-1945), Americans rebelled. Three giants led the fight against Communism, with tens of millions of supporters of all social classes:

McCarthy exposed communist traitors throughout the federal government. And as the late M. Stanton Evans recounted in his account of McCarthy’s battle, Blacklisted by History, the U.S. Army was penetrated as deeply as the State Department.

Yet Republicans helped Democrats smear McCarthy as an irresponsible Red-baiting lunatic. They included President Dwight D. Eisenhower, Supreme Allied Commander in Europe during WWII, a nominal Republican and end-of-ideology technocrat. Ike had dual loyalties: his true commitment was to the U.S. Army. To save the reputation of an institution he justifiably loved, he helped destroy McCarthy by refusing to hand over crucial documents that proved his case.

Though Ward Bond supported Richard Nixon in the 1960 presidential election, he despised both parties. He also hated Jews [Ward Bond: Oaf, Loudmouth, Anti-Semite, by Erik Lundegaard, Eriklundegaard.com, May 21, 2014]. Bond was a man of exuberant hatreds and loves. On November 5, 1960, at the age of 57, a massive heart attack killed him. He would prove irreplaceable. MPA faded away and disbanded in 1975.

Candy tycoon Welch, who invented the Sugar Daddy, was brilliant and charismatic. Occasionally, he promoted nutty ideas, one being that Ike was a “dedicated, conscious agent of the Communist conspiracy.” Of course, there was a conspiracy, as McCarthy had shown. But Welch failed to grasp that Ike’s loyalty to the Army was the problem, not any affinity for communism.

Welch and the JBS also fought fluoridating public water supplies as “mass medicine,” a fight that continues today in some American communities.

As the JBS grew in power and prestige—its co-founders included big businessmen such as Fred C. Koch—William F. Buckley, Jr. decided Welch and JBS had to be destroyed. The founder of the once pro-segregation National Review, with the help of Senator Barry Goldwater and other conservatives, marginalized Welch, who had donated money to help Buckley start NR but was a rival for the role of America’s conservative intellectual leader. Buckley could not abide that, of course [Goldwater, the John Birch Society and Me, by William F. Buckley Jr. Commentary, March 2008]. Later, Buckley trimmed his sails and became a neoconservative.

Yet whatever the internecine battles among conservatives, communism was on the average American’s mind. McCarthy and the House Un-American Activities Committee had done a good job. Americans saw Soviet premier Nikita Khrushchev bang his shoe at the United Nations and heard him say “we will bury you.” A communist, Lee Harvey Oswald, had assassinated President John F. Kennedy.

No matter. Having brought down McCarthy with the help of the GOP, the Democrat Party concocted a strategy to depict Republicans as conspiracy nuts who would lead the United States into a fascist dictatorship, or worse, nuclear war. Columbia history professor Richard Hofstadter wrote about The Paranoid Style in American Politics [Harper’s, November 1964].

Unfortunately, during the same period in which anti-Communism had its greatest success, Communism was also re-branding itself, in the guise of the so-called Civil Rights Movement. Most white patriots were unwilling to publicly denounce black activists.

So for the last 50 years, the two main political parties have diverged, with the Democrats becoming the party of blacks and a coalition of the fringes, and the GOP becoming the Generic American Party, i.e, the party of the Historic American Nation—the party of whites. Problem is, party strategerists ignored that truth. They went along with the anti-white “civil rights” movement.

Just after the 2000 election, our Steve Sailer formulated his “Sailer Strategy.” If the GOP would mobilize its white base, it could remain in power for generations. The party ignored Sailer. Indeed, in an autopsy after a second loss to Barack Hussein Obama, GOP Brain Trusters presented a plan to alienate its base even more: “[E]xtensive outreach to women, African-American, Asian, Hispanic and gay voters,” along with a nation-breaking mass Amnesty of low-IQ, low-VQ, Third-World, illegal aliens [RNC Completes ‘Autopsy’ on 2012 Loss, Calls for Inclusion Not Policy Change,” by Shushannah Walshe, ABC News, March 18, 2013]. The plan expressed the party apparatchiks’ delusion that it could somehow pilfer the vote of the Democrats’ fringe coalition. Pursuing it would have meant certain death for the GOP nationally.

Then came Donald J. Trump, who explicitly appealed to the GOP’s base of white voters by denouncing immigration and trade deals that have shafted Middle America. The 2016 election was in many ways a rerun of 1964, only in 2016 the unthinkable happened: the good guy won. That’s why Democrats and Never-Trump Republicans resolved to stop a repeat in 2020 and gave us The Big Steal. With it, of course, came the January 6 Star Chamber to crush dissent supposedly protected by the First Amendment. Whites had to be taught they had better shut up.

Until Trump, contemporary Republican leaders, with few exceptions such as Rep. Steve King, had never defended the almost all-white Historic American Nation. Indeed, they led the charge against the brave few who defended it from black criminals. In 1991, for instance, President George H.W. Bush’s Department of Justice staged a show trial of the four white Los Angeles cops acquitted in the beating of career black criminal Rodney King. Since then, it suffices to say that white mayors, governors and presidents, using police chiefs and prosecutors, have given virtually every black criminal in the country a pass to murder and terrorize whites.

If the GOP retakes the majority in either or both chambers, it must pressure or replace Kevin McCarthy and Mitch McConnell with Trump-style populists, impeach riot-supporting Democrats in Congress, and replace rogue judges and prosecutors. Otherwise, if there is hope, it lies in secession movements and tax strikes.

But one way or the other, the Historic American Nation must fight.