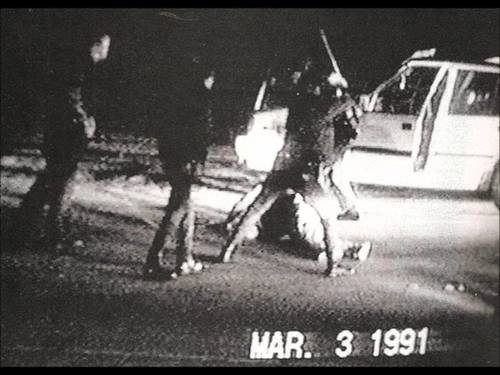 In my article about the crucifixion of Michael Slager, I said that  this approach of railroading (mostly) white policemen, treating black felons like victims, and attempting to buy peace, goes back at least as far as the Rodney King case in 1991. Here's the rest of that story.

Buff, 6’2,” 220-lb., convicted felon and parolee King was high out of his mind, and led police on a chase in which he hit speeds of 110-115 mph, in order to avoid going back to prison, and violently resisted arrest, assaulting four white policemen, whom he left no alternative but to brutally but legally beat him with metal batons, until he would submit to arrest.

Instead of being sent back to prison to finish his sentence for armed robbery, plus additional years for his new crimes, King was treated like a crime victim, and a martyr to white racism. Local TV station KTLA doctored an already abbreviated videotape made of the end of King’s confrontation with police, by cutting out the passage when King charged the police, thus provoking the baton-beating. The MSM referred to King as “black motorist Rodney King,” instead of as “convicted felon Rodney King.” Seemingly every TV station in America showed the doctored video thousands of times, causing a frenzy of hate against the policemen, who were prosecuted in state court. A civil court jury awarded him $5.5 million for his crimes.

A white Simi Valley jury saw the undoctored tape, with King assaulting the police, heard testimony, and on April 29, 1992, acquitted the four officers.

Minutes later, the biggest riot in Los Angeles history broke out at the intersection of Florence and Normandie, as blacks burned the city down, causing $1 billion in property damage, 53 deaths, and countless maimings in racially motivated attacks on whites and Asians.

According to the official story, the L.A. riot was an “uprising,” a righteous response to the “injustice” of the four LAPD officers being acquitted. The first entry at Yahoo.com for “Florence and Normandie” opens, 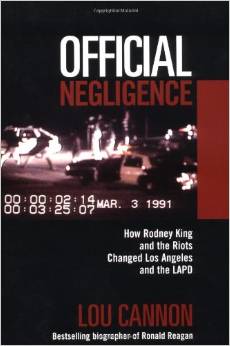 As Lou Cannon showed in his monumental work, Official Negligence: How Rodney King and the Riots Changed Los Angeles and the LAPD, the black rioters at Florence and Normandie were not responding to the jury verdict, about which they were completely unaware. They just decided to terrorize a Korean liquor store owner.

Police at the scene were confident that they could get the situation under control, but their terrified superiors ordered them to flee, which emboldened the ragtag gang of racist blacks to expand their riot. The little riot was shown on TV, which emboldened racist black thugs all over the city. Hispanic criminals then joined in.

The Los Angeles riot was thus a de-policing and media riot. Immediate, muscular policing would have kept black and Hispanic criminals in check.

President George H.W. Bush saw the riots on TV, decided that blacks’ racist, psychopathic rage had to be born out of righteous indignation, and ordered the Justice Department to bring him the heads of the four white officers in a civil rights show trial.

In 1993, federal jurors, convinced that if they did not sacrifice at least some white policemen, the “13th juror” (the street) would erupt again, convicted two policemen, while acquitting two.

That was the template for the continuing false charges against white police across America today.