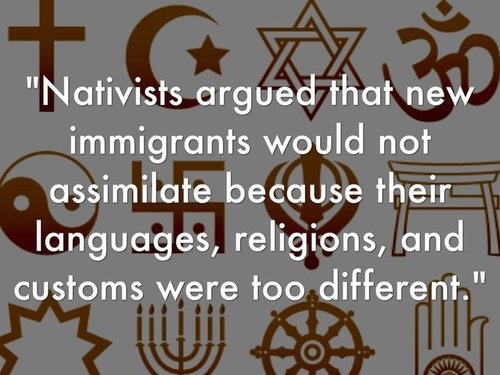 John Higham And "Nativism"—Sometimes The Nativists Were Right

Programs marking the golden jubilee of the nation-pummeling Immigration and Nationality Act of 1965 (the Hart-Celler Act) have been thick on the ground recently.  Jared Taylor reported on two such events in his October 6th VDARE.com article, The Great Replacement: The 1965 Immigration Act And The Think Tanks.

One of those happenings was the October 1st panel discussion (videos here, transcript here) held by the Center for Immigration Studies [CIS].  The program was keynoted by CIS fellow (and Pulitzer Prize winner in a prior career) Jerry Kammer's retrospective on Hart-Celler, drawing on his current paper, The Hart-Celler Immigration Act of 1965 (HTML; PDF).

In both his paper and his talk, Kammer highlighted an oft-cited book, Strangers In The Land: Patterns of American Nativism 1860-1925, and referred to its author John Higham as "the dean of immigration scholars."

One dictionary's definition of "nativism" is "the policy of protecting the interests of native inhabitants against those of immigrants."  Since the purpose of the United States is to benefit its citizens (recall the passage in our Constitution's preamble "... to ... secure the Blessings of Liberty to ourselves and our Posterity ..."), it doesn't seem obviously outrageous that native inhabitants would have some priority over newcomers.  Nevertheless, "nativism" and "nativist" are promiscuously employed as epithets—essentially pejorative boilerplate—by open-borders ax-grinders such as the American Civil Liberties Union (example here) and the Anti-Defamation League (example here).

And in a 2004 essay, The Unheeded Second Thoughts Of John Higham, historian Otis Graham wrote:

In the years after Strangers in the Land was published, historians and journalists have tended to treat the cause of reforming immigration policy simply as an outbreak of nativism, essentially bigotry and fear of foreigners.

Indeed, the motive for the Hart-Celler Act was to right the "wrong" of the 1924 national-origins quotas that had finally throttled America's four-decades long Great Wave of immigration.  Kammer quoted President Lyndon Johnson at the ceremony when he signed the 1965 bill into law:

"[It repairs] a very deep and painful flaw in the fabric of American justice. It corrects a cruel and enduring wrong in the conduct of the American nation."

But I think the very notion of this "wrong" is undone by the preface to the second edition of Higham's book.  Here are its first three sentences, with my emphasis added:

I began work on this book in 1948 in an effort to understand historically the interplay of two aspects of contemporary life that concerned me deeply.  One was was nationalism, that essential cement of modern societies that has so frightfully disrupted the modern world.  The other was ethnic prejudice, that older and deeper repulsion between peoples of dissimilar cultures.

The bolded sentence would seem to rebut the notion that nativism is something peculiarly American.

Nor should nativism be taken as synonymous with out-of-the-blue prejudice.  In 2007, writing at VDARE.com, Brenda Walker distilled a basic reality of human nature into a terse statement which fleshes out that sentence of Higham's:

We all prefer to be around others who speak our language, share our values, and understand our jokes. Human community is based upon similarities, not differences. Wouldn’t it be better to develop public policy on the basis of human nature as it really is?

Plus, beyond the problem of "dissimilar cultures," during substantial stretches of U.S. history there were objective reasons for many native-born Americans to dislike immigration, if not immigrants.  Consider a striking part of Otis Graham's essay, his quote from Robert Fogel:

Thus, economic historian Robert Fogel writes that the flood of immigrants arriving in America from 1841 to 1851, more than had come in the previous two centuries, "put severe downward pressure on wages and job opportunities. American workers suffered one of the most severe and protracted economic and social catastrophes of American history."

(The late Fogel was a winner of the Nobel Memorial Prize in Economics, and the quote above comes from another well-known book, Without Consent or Contract: The Rise and Fall of American Slavery.  A transcription of the five relevant pages from Fogel's book is available here: PDF.)

The title of the Graham piece makes explicit that Higham himself later had second thoughts about "nativism" as the (invidious) explanation for Americans' resistance to immigration.  And Kammer acknowledged those second thoughts in his CIS talk (though not in his paper on the Hart-Celler Act), saying:

Interesting to see that Higham, in his later years, pulled back a bit from attributing the 1924 Act just to nativism, and said you have to understand the anxieties and what he called the “status rivalries” within the American public that were all, he says, part and parcel of trying to combine large numbers of groups from different countries into the American experiment. So Higham took a broader view in his later years, and actually called himself a moderate restrictionist before he died in 2002.

Then if the dean of immigration history recanted somewhat on "nativism" as America's original immigration sin, why does the name-calling—"Nativist!"—persist?

Well, we all know the answer to that, don't we?  It's just a variant of what Arizona political consultant and former state legislator Alfredo Gutierrez told reporter Richard de Uriarte, as published in The Phoenix Gazette on March 14, 1993 [PDF]

We call things “racism” just to get attention. We reduce complicated problems to racism, not because it is racism, but because it works.