Previously: The Alt Right: Not Anonymous Losers—But Winners With Something To Lose (That’s The Problem)

In my last article, I refuted the Conservatism Inc. claim that the Alt Right are just idiotic losers. Now two high-profile Conservatism Inc. hit pieces kvetch about Milo Yiannopoulos and Allum Bokhari's assertion that Alt Righters are actually quite intelligent. [An Establishment Conservative’s Guide to the Alt-Right, Breitbart, March 29, 2016]In the process, VDARE.com gets smeared.

Continetti’s answer: “a smart skinhead is still a skinhead”. [The Coming Conservative Dark Age, Commentary, April 12, 2016] While Young does not use the word “skinhead” in the piece, she (or her editors at the Federalist) put an image of a menacing-looking European nationalist with a shaved head atop her column. 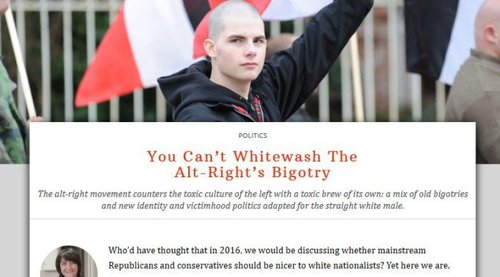 “Skinheads,” incidentally, are a nearly fifty-year-old subculture who are not tied to any ideology. Many skinheads are, in fact, rabidly left wing and anti-racist.

I’ve never met or even heard of a single one involved with the Alt Right.

Young, however, does not challenge Alt Righters intelligence or their social lives. Instead, she falls back on to the old standby: Alt Righters are racists! and anti-Semites!!

The most striking aspect of Young’s article: how ignorant she is of her subject. Thus she refers to the Alt Right’s “online hubs such as Richard Spencer’s AlternativeRight.com and Steve Sailer’s VDARE.” While Steve Sailer is a valued contributor to VDARE.com, a glance at VDARE.com’s Wikipedia page or the “about” section on this website would reveal that it’s VDARE.com Editor Peter Brimelow’s creation.

Furthermore, as Young later announces, AlternativeRight.com "no longer exists"—nor has it since 2013, when Richard Spencer launched RadixJournal. It’s obvious that she never bothered to even look at the flagship website of the Alt Right until she decided to write her hit piece. (There is an unrelated but sympathetic blog—but Young didn’t notice that either).

Young goes on to point and sputter at both Radix and VDARE.com. Although she is not pro-life, she nevertheless vented about a Radix article that (accurately) laid out the demographic implications of our current abortion laws [The Pro-Life Temptation, April 8, 2016]. Young deduced that the bylined author Aylmer Fisher is “presumably a pseudonym stolen from the innocent British geneticist” R.A. Fisher. But, once again, had she bothered to read the table of contents in R.A. Fisher’s Wikipedia page—which she linked to!—she would have learned that Fisher was an avid eugenicist who believed that human groups differ profoundly "in their innate capacity for intellectual and emotional development."

Young’s criticism of VDARE.com’s is similarly incompetent. She is triggered that VDARE.com publishes pieces by Kevin MacDonald about the Jewish role in what she describes as "destroying Russia via Bolshevism and undermining America via unrestricted immigration." [Links added.]

Curiously, Young fails to mention her own background.

She finds it particularly odd that VDARE.com publishes these pieces given that “MacDonald’s book The Culture of Critique was the subject of a scathing review in The American Conservative by John Derbyshire, currently another VDARE [.com] stalwart.” [Link in original.]

A non-hysterical observer would have deduced that this means Kevin MacDonald’s views do not, in fact, define VDARE.com— unlike Conservatism Inc., it will tolerate heterodox opinions.

In fact, VDARE.com has published many articles (including some by Jewish immigration patriots) critical of MacDonald’s hypothesis. Unlike Young, however, these actually engage his arguments rather than shrieking that his serious academic work is “‘The Protocols of the Elders of Zion’ dressed up as evolutionary psychology.”

Significantly, Continetti devotes less words to trying to prove the Alt Right’s racism, and more to bemoaning Conservatism Inc.’s inability to destroy it. Other than the throwaway line that the Alt Right is a “grab-bag category that includes nativists, eugenicists, bigots, anti-Semites, misogynists, reactionaries, aristocrats, monarchists, isolationists—basically anyone who hates today’s America and the modern world and the men and women, of any race or religion, who flourish in it,” he doesn’t bother to debate the Alt Right at all.

Rather, Continetti takes the untouchability of the Alt Right as a given—he just bemoans Conservatism Inc.’s failure to destroy it.

In the good old days, he says, conservatism “resembled the Catholic Church, with Buckley as pope, issuing bulls and ex-communicating heretics.” When an author submitted a heretical article, "it meant the end for that article and for the writer’s future." As Continetti notes, they had nowhere else to go. “Publishing a magazine and producing television is expensive. Not everyone can do it.”

This does not seem like a particularly appealing regime. But Continetti claimed it lead to success: “[B]y exiling anti-Semites, Birchers, and anti-American reactionaries from its pages, the magazine and its editor determined which conservative arguments were legitimate and which were not."

Buckley and company lowered the drawbridge and welcomed the neoconservatives to the castle. ‘Come on in,’ National Review editorialized, ‘the water’s fine.'

Continetti believes that this led to “a conservatism infused with empiricism, with the densely reasoned argumentative style of the New York intellectuals. The Reagan administration would reap the benefits.”

I am tempted to just respond to this absurd claim with the brilliant Alt Right parody song “The National Review” by Uncuck The Right (now known as Walt Bismarck) which concludes, “now here is a riddle, it may change your views of the National Review... Who’s the real bigot making the Right lose?"

The National Review by uncuck-the-right

According to Kurt Schuparra’s 1998 book Triumph of the Right: The Rise of the California Conservative Movement, 1945-1966 “The JBS enjoyed success in California despite a multi-pronged attack in October 1965 from the premier conservative periodical, the National Review."

The Society’s members were likely instrumental in electing Reagan as Governor of California in 1966, because he was smart enough not to disavow its support. While Reagan distanced himself from JBS founder Robert Welch’s conspiracy theories, he made clear he would accept support from the Birch Society members but their support merely meant he had “persuaded them to accept my philosophy, not me accepting theirs.”

Imagine how National Review would denounce Donald Trump if he responded to calls to disavow his more outspoken supporters with that line.

While the Society declined in the 1970s, it still maintained some influence as it shifted its attention away from the threat of domestic Communism and towards globalism, in part by leading opposition to the Panama Canal Treaty.

While Reagan and the John Birch Society opposed the Panama Canal giveaway, Buckley supported it—and even debated Reagan over it in 1978.

In contrast, while Reagan eschewed the conspiracy theories about the Trilateral Commission, he nonetheless said, "I do think its interests are devoted to international banking, multinational corporations and so forth." He promised not to fill up his administration up with members of the organization.

Reagan was not a Bircher, but he recognized the same populist anti-globalist and anti-elite sentiment that drove them in the lead up the election. This put him directly at odds with Buckley.

I disagree with Continetti’s view of conservative history. But he is right that today the internet has largely made conservative “gatekeepers are mostly useless.”

the rise of social media may have helped conservatives—it allowed them to investigate, report, opine, entertain, and influence politics and policy by giving them the means to bypass liberal outlets.

But he regrets the internet has the downside that

the authority of any one man or publication or radio show or television network has receded to the point of invisibility.

In other words: the internet is good when it allows us to bypass the Leftist Main Stream Media. But it’s bad when anyone to our right uses it to bypass us!

To those who may not like the idea of Pope Buckley, Continetti says the alternative is much worse with the Right resembling

Islam, with untold numbers of mullahs issuing contradictory fatwas, with antagonistic schools of thought competing for adherents, with not a few radicals eager and willing to blow the whole thing up.

Significantly, if one wanted to make an analogy, much more relevant to American history, of a once-infallible religious leader facing threats from multiple schools of thought using a new technology to spread their message, Martin Luther, not Mohammed comes to mind.

The Alt Right is not looking to reform corrupt Conservatism Inc. It wants to destroy it.

In this respect, it’s revealing that Continetti celebrates the high costs and "barriers to entry" during the Buckley's heyday. Rather than religion, this brings to mind economics—the classic description of a monopoly.

For all Continetti’s fretting about the Alt Right bringing “another conservative dark age,”, the Alt Right’s top institution’s likely have an annual budget of less than half a million dollars combined. In contrast, Conservatism Inc. has literally billions of dollars. 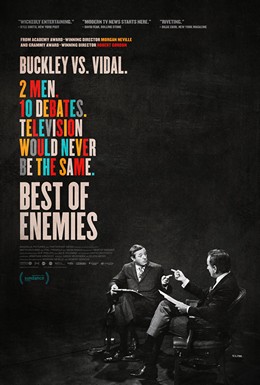 So what does it say about the “conservative" movement’s value in the marketplace of ideas when its very existence is threatened by a few small institutions, some anonymous trolls on Twitter, and a few writers who National Review thought they had already destroyed?

The Alt Right is not like Islamists waging jihad against Conservatism Inc.—it’s like Netflix unleashing creative destruction upon Blockbuster.

While Alt Right stock is skyrocketing, Continetti, Young, and other cuckservatives will have to content themselves intoning over Buckley—while looking for a VHS version of Best of Enemies.