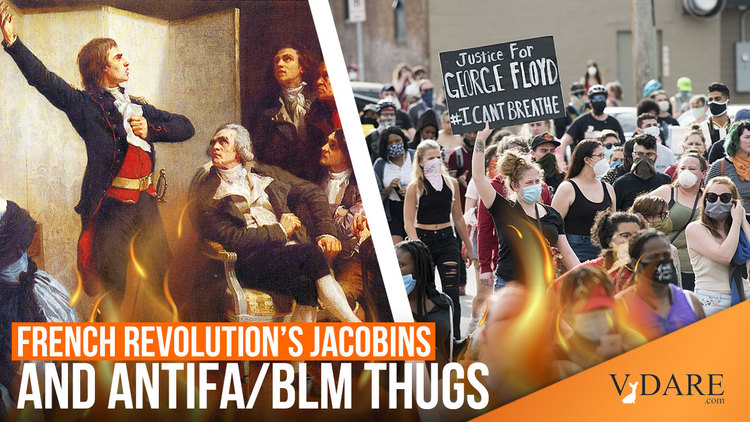 Earlier, by Peter Brimelow: "It Will Come To Blood"—Reflections On The Left's Anti-Trump Inauguration Tantrum

The recent sudden eruption of a Totalitarian Left in America is essentially unparalleled in our history. But it has an unmistakable precedent in the early French Revolution: the Jacobins, who briefly held power and imposed a regime of crazed ruthlessness and radicalism before being overthrown by the moderate Thermidorian Reaction (named for the month of Thermidor—changing the calendar was part of the Jacobins’ drive to destroy traditional society and culture). Today, a flagship publication of the U.S. Left is called, incredibly, Jacobin—openly glorying in the implied threat of repression and mass murder. The good news: these revolutionary spasms don’t last. The bad news: they can do a lot of damage.

Jacobinism was the mother of all modern totalitarian ideologies. The Club was formed on April 30, 1789, by anti-royalist deputies to the newly-summoned Estates-General, many of whom were middle-class strivers like lawyer and future leader Maximilien Robespierre. By October 1789, it was reorganized as The Society for Revolution, or The Society of the Friends of the Constitution. Royalist pamphleteers called the club the “Jacobins” because it met at a former Dominican monastery in Paris, the Couvent des Jacobins de la rue Saint-Jacques. By July 1790, the Jacobin Club’s membership numbered 1,200 in Paris; 152 clubs had sprouted throughout France.

The ethos of the Jacobins was revolutionary and based in the ideals of the Enlightenment. Its adherents wanted to destroy the French monarchy and replace it with a “democratic” republic disconnected from any influence of the Catholic Church. They were militantly anti-Christian and violent from the beginning, taking inspiration like many others in the revolutionary ferment from Lucifer, the rebel against God. 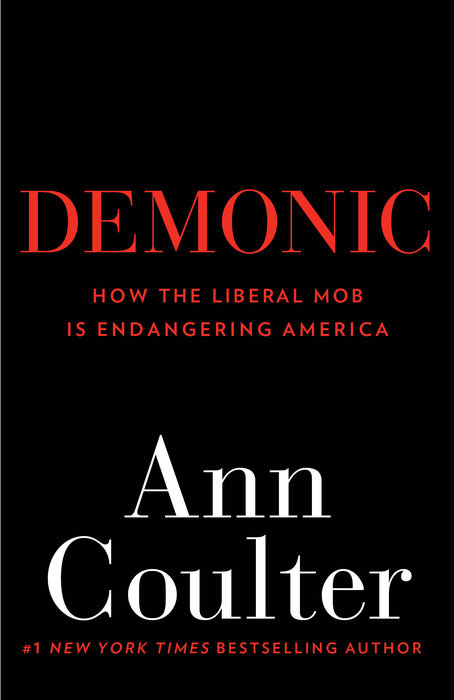 The Jacobins sought to use the profound anger of the French Revolution to their advantage. And what anger there was. The storming of Versailles by an army of women—and men dressed like women—ended with the decapitation of two guards and a chorus baying for Queen Marie Antoinette’s flesh and blood. Other instances of urban violence included the storming of the Bastille [Demonic: How The Liberal Mob Is Destroying America, by Ann Coulter, Penguin Random House, 2012].

But that violence paled beside what was to happen between September 5, 1793, and July 28, 1794—the “Reign of Terror.” As Revolutionary France fought for its life against a coalition of European monarchies, the government in Paris decided to secure its power by eliminating suspected counter-revolutionaries. The Jacobins, led by Robespierre and his Committee of Public Safety, suspended the right to a public trial and legal assistance. They arrested 300,000, executed 17,000, and let 10,000 die in prison. 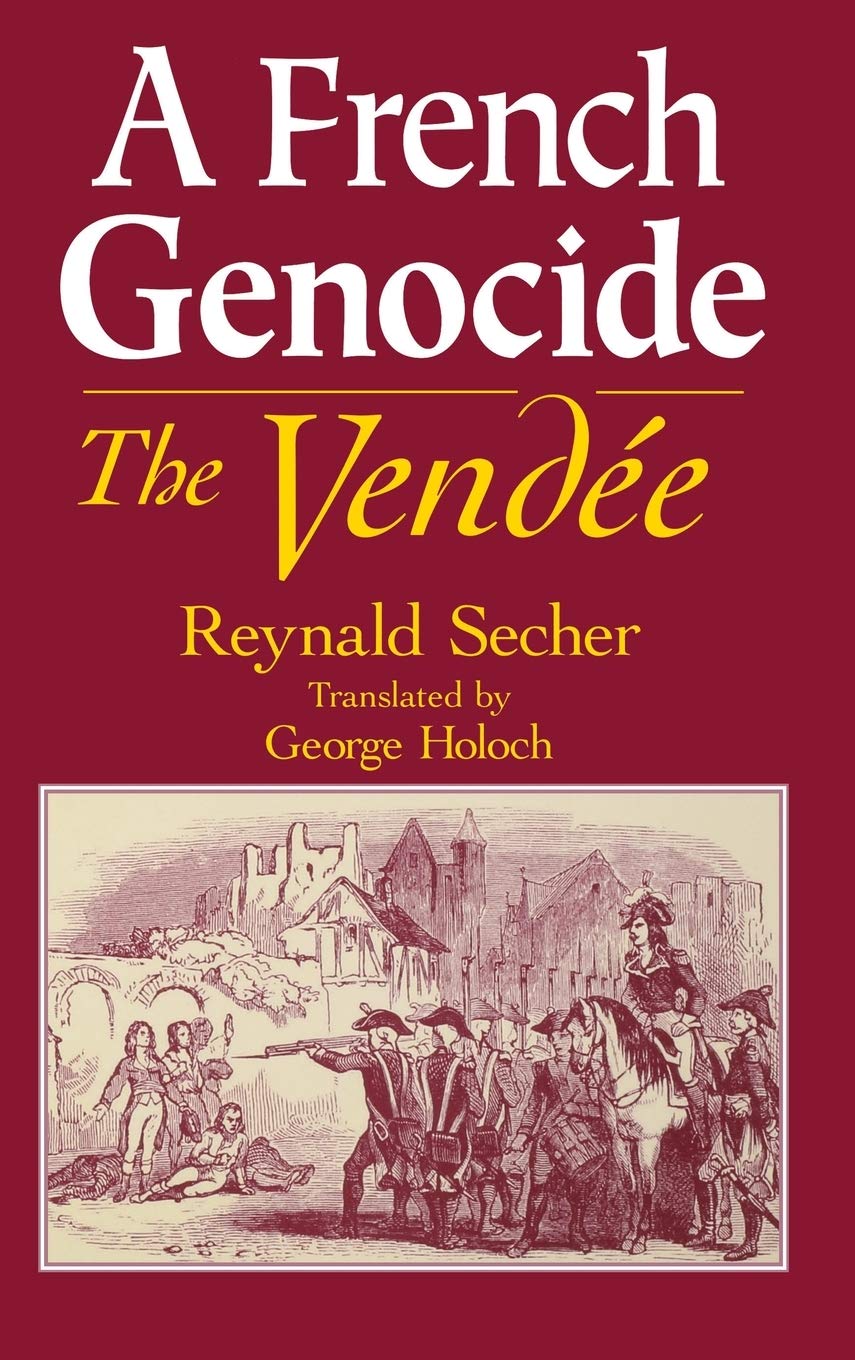 Terror came to the provinces too. As part of the Jacobin assault on local autonomy, soldiers were sent out into the countryside. In the Vendée, they found a peasantry enraged over the destruction of their churches and traditional way of life. They responded by carrying out what amounted to a genocide: French historian Reynald Secher estimated that 117,000 Vendéens out of a population of 815,000 disappeared from the public record during the insurgency. On top of that, eighteen percent of private houses were lost along with approximately fifty percent of all dwellings [The French Genocide That Has Been Air-Brushed From History, by Jaspreet Singh Boparai, Quillette, March 10, 2019]. As in Paris, churches were turned into whorehouses or made into anti-churches where the Goddess Reason was worshipped instead of Jesus Christ.

This is significant. Aberrant sexual practices were also a core component of the Jacobin revolution—influenced by the Marquis de Sade, the pornographer and pervert who had spent five years in the Bastille for sex crimes before the prison was stormed. The Jacobins promoted free love and promiscuity, tried to ban priestly celibacy and strong-armed priests into getting married [The Jacobin Clubs in the French Revolution, 1793–1795, by Michael Kennedy].

Of interest to Americans given the current border disaster, the Jacobin malignancy metastasized to Haiti. In May 1791, the revolutionary government granted political rights to rich free people of color on the island, but the gesture didn’t stop the coming hurricane of sanguinary violence. On August 21, after a voodoo ceremony, slaves rebelled. The slave army reached 100,000. Here’s how Leftist Wikipedia describes the resulting bloodbath:

[M]asters and mistresses were dragged from their beds to be killed, and the heads of French children were placed on spikes that were carried at the front of the rebel columns. …

[W]ithin the next two months, as the violence escalated, the slaves killed 4,000 whites and burned or destroyed 180 sugar plantations and hundreds of coffee and indigo plantations. At least 900 coffee plantations were destroyed, and the total damage inflicted over the next two weeks amounted to 2 million francs. In September 1791, the surviving whites organized into militias and struck back, killing about 15,000 blacks.

In July 1792, a civil commission backed by 6,000 soldiers arrived from France. Among the members of the commission: Léger-Félicité Sonthonax, a committed Jacobin. In 1793, Sonthonax emancipated the slaves—sort of like defunding the police?

In 1805, after French troops departed the island, self-declared emperor Jean-Jacques Dessalines promised to protect whites, and white refugees who had fled the violence returned. But then Dessalines began a white genocide. A French official who witnessed the horrors said bands of blacks and mulattos attacked white women and children with knives, bayonets, and sabers [The French Revolution in San Domingo, by T. Lothrop Stoddard, Houghton-Mifflin, 1914]. Many were disemboweled, others were drowned. White women were kept as sex slaves and forced to “marry” their tormentors. By the end, the Jacobin-inspired revolution of Haiti had killed off the white population of the island.

In later years, the Luciferian Jacobin spirit spread beyond France to Soviet Russia and elsewhere. Another lesser-known episode: the 1910–1920 Mexican Revolution, which left the revolutionary government of General Plutarco Elías Calles in charge. Calles immediately attacked the Catholic Church and the peasant Cristeros took up arms.

Approximately 30,000 to 50,000 Mexican Catholics perished in the fighting. The Church recognizes 25 saints and martyrs of the war.

The same story played out in the 1936–1939 Spanish Civil [Spain: Remembering the forgotten Red Terror, by Rev. Ben Johnson, Acton.org, November 6, 2017]. As with Mexico, the Catholic Church has beatified almost 2,000 victims of the Red Terror. And like true Jacobins, the current socialist government of Spain is erasing the country’s past, even moving the graves of the Nationalist dead.

Remember the campaign staffers for Bernie Sanders who threatened the guillotine and mass murder for Republicans, Trump supporters, and moderate Democrats [ANOTHER Bernie 2020 Field Organizer: “I’ll Straight Up Get Armed…I’m Ready for the F***ing Revolution…Guillotine the Rich”; Praises the Soviet Union, Advocates Sending “All the Republicans to the Re-Education Camps,” Project Veritas, January 21, 2020].

To summarize: the Jacobin parallels with BLM and Antifa and with the Regime in Washington that supports them are clear:

All those were features of the original Jacobin revolution. Our American Jacobins want to kill us and destroy our country. We had better get to work.

Paul Souvestre [Email him] is a French citizen and Breton nationalist originally from Brest. He currently lives in Quebec.