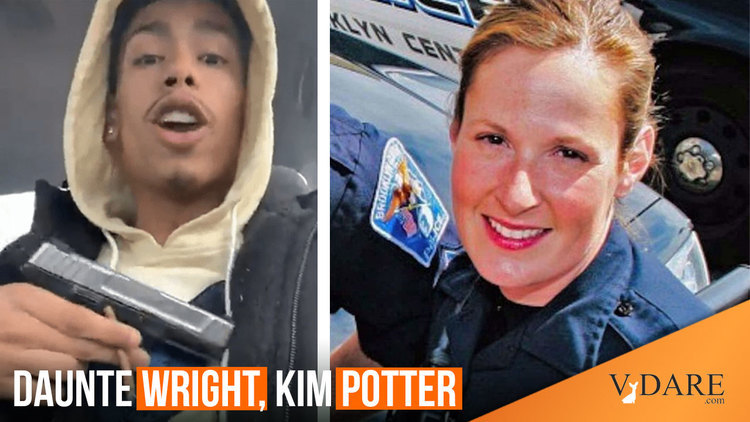 Earlier by Ann Coulter on Daunte Wright: ‘Give Us the F-ing Facts, NYT. We Know You Have Them

The MSM have referred to Wright as a “Black motorist,” just like they did over 30 years ago, with Rodney King (except for now capitalizing “black”). And “unarmed.” They’re incorrigible, persistent offenders.

Officer Potter said she mistakenly reached for her service weapon and shot Wright, when she had meant to taze him. However, since Officer Potter was acting to protect her partner, Sgt. Mychal Johnson, from grievous bodily harm or death at Wright’s hands, reaching for her Taser would have been a mistake. Shooting Wright dead was the tactically, legally, and morally correct decision on Officer Potter’s part.

However, under the unwritten law of Jim Snow/Anarcho-Tyranny/the White Genocide Project, Officer Potter was wrong. Anything she did was going to be wrong. (Just like with President Donald J. Trump.)

“Potter, 49, shot Wright after he tried to flee cops seeking to arrest him on a weapons warrant during a traffic stop in Brooklyn Center, Minnesota. His death sparked national protests [sic] that happened alongside the trial of Derek Chauvin for the murder [sic]of George Floyd.”

The Post article says that Officer Potter now faces 11 years in prison…for doing her job. (N.B.: That’s me speaking, not the Post.)

On October 27, 2002, Madera, California, Hispanic police woman Marcie Noriega shot and killed suspect Everardo Torres, 24. Officer Noriega claimed she had meant to draw her Taser, but accidentally drew and fired her service weapon. Officer Noriega faced neither criminal charges, nor even departmental discipline, and there was no trial by media. The media hushed up and disappeared the whole matter [Johannes Mehserle vs. Marcie Noriega: The Identical Act is ‘Murder,’ if You’re a White Cop, but No Crime at All, If You’re a ‘Diverse’ Cop, by Nicholas Stix, NicholasStixUncensored, October 14, 2011].

However, when the identical type of situation arose during the wee small hours of New Year’s Day, 2011, the results couldn’t have been more different. Blacks were rioting at Fruitvale Station in the Bay Area Rapid Transit (BART) station. There were two reasons for the riot, though no blacks were about to admit this:

1. The racist outrage whereby the day in question ended in “y”; and

2. In order to celebrate the New Year.

BART officer Johannes Mehserle tried to handcuff black rioter Oscar Grant, who was resisting arrest. Officer Mehserle announced to his colleagues that he was going to taze Grant, and thought he reached for his Taser, but instead drew and fired his service weapon, killing Grant.

Officer Mehserle was hung out to dry. First, of course, came the media and black supremacist “lynching.” Then came the criminal charges and the show trial.

“Federale suspects that Alameda County DA Nancy E. O’Malley sacrificed Officer Mehserle on the altar of black votes. I believe that Officer Mehserle was the political prisoner of a race war, independent of the vote issue.

“DA O’Malley indicted Officer Mehserle for second degree murder, which could have gotten him 25-to-life, but his attorney succeeded at getting the trial moved from Alameda to Los Angeles County, where a jury acquitted him of second-degree murder, but convicted him of involuntary manslaughter. Even then, with the case out of her hands, but with Mehserle still having been convicted in a political prosecution, D.A. O’Malley still pushed hard to see that he served prison time, and indeed prevailed. Los Angeles County Superior Court Judge Robert Perry sentenced Mehserle to two years in prison, but Mehserle was released after one year for good behavior.”

Officer Potter, like Officer Mehserle, is white, and thus guilty.

Not all of the white political prisoners have been convicted, but the lives of all of them have been destroyed, and they have been saddled with debts they’ll spend the rest of their lives trying to repay.

Sometimes the local prosecutor will be a Republican, but typically he’ll be a Communist, er, Democrat.

There is no law in America. The rule of law is dead. We don’t even live under the law of the jungle. That would be an improvement over the current regime. We live within a system in which members of privileged, affirmative action groups get free crimes, while for members of scapegoated groups, i.e., normal, patriotic, law-abiding whites, merely existing is a crime. And the terrorized whites must also listen to the lying, racist sanctimony of white “allies,” who clean up, in hopes that they’ll be spared until last.