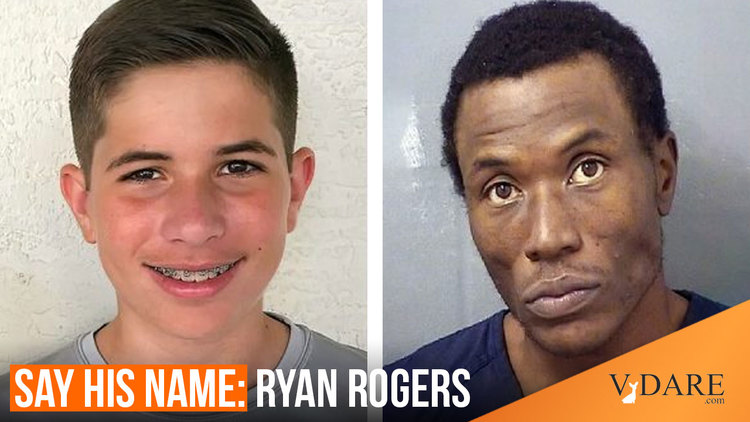 His Name Is Ryan Rogers: White 14-Year-Old, Out Riding His Bike, Murdered By Black Man With Extensive Criminal Record

His name is Ryan Rogers. He was last seen riding his bike, before allegedly being murdered by a black career criminal.

“He appears to be a homeless drifter spending most of his time on the streets of Miami” is how Clint Shannon, Chief of Police of Palm Beach Gardens’ Police Department, described 39-year-old Semmie Lee Williams Jr.

Williams was arrested Wednesday and was taken into custody in Miami on a first-degree murder charge for the killing of Ryan Rogers, 14.

Rogers, a freshman at William T. Dwyer High School in Palm Beach Gardens and an avid soccer player, was found dead on Nov. 16 alongside an Interstate 95 overpass just a few minutes away from his home.

It was less than 24 hours that Rogers’ body was found 80-feet south of the Interstate 95 overpass on Central Boulevard, according to Williams’ arrest form.

The form also states that a set of headphones, which did not belong to Rogers, were found at the scene. A DNA match to Williams was determined by the Palm Beach County Forensic Biology Unit.

“The incident itself appears to be a completely random act. We do not have a motive in this case and I would best describe it as an innocent child victim having a chance encounter with a very violent criminal,” Shannon said at a Thursday press conference outside of the Palm Beach Gardens Police Department.

Shannon did say that Rogers was stabbed, but would not release further details, saying that the investigation is ongoing.

“It appears to be a chance encounter between a child and an animal that should not be out on our streets,” Shannon said.

Williams has an extensive criminal record, according to Shannon.

In 2016, Williams was arrested for aggravated assault with strangulation by the Fulton County Georgia police department.

In 2016, Williams was a fugitive from justice and arrested on a warrant in San Diego, Calif.

In 2007, he was arrested for failure to appear in Seminole, Fla.

In 2006, he was arrested for violation of an injunction on a battery case and failure to appear in Sanford, Fla.

In 2005, he was arrested on a protective order for domestic violence in Seminole County, Fla.

In 2005, he was arrested for probation violation in Seminole County, Fla.

In 2004, he was arrested for petty theft in Sanford, Fla. and

In 2004, he was arrested for carrying a concealed electric weapon in Sanford, Fla.

Williams is being held without bond at Palm Beach County’s Main Detention Center.

Were America a white supremacist nation, dominated by white privilege, implicit bias, structural inequality, redlining, and the terrible legacy of Jim Crow, entire communities would be trembling now at the murder of Ryan Rogers.

As it is, this 14-year-old white boy’s death means almost nothing in the city where it happened.