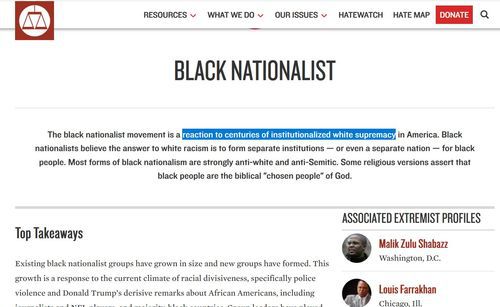 The SPLC on black nationalism:

Existing black nationalist groups have grown in size and new groups have formed. This growth is a response to the current climate of racial divisiveness, specifically police violence and Donald Trump’s derisive remarks about African Americans, including journalists and NFL players, and majority-black countries.

Unlike white hate groups, they have made virtually no inroads into the mainstream political realm and have virtually no supporters among elected officials.

Indeed. Senator Patrick Little and congressman Paul Nehlen practically own the Capitol Building. The closest someone like Keith Ellison could get to a position of power, in contrast, is as busboy at a swanky DC restaurant. Farrakhan with a random Hawaiian groupie

Looking at it for the first time, I expected the center’s censure to be exclusively attributed to black nationalism’s animus towards Jews, but it does make note of “anti-white” sentiment.

Black nationalism’s alleged hatred for whites is described as a “predictable reaction to white supremacy” while its reported antipathy towards Jews isn’t quasi-rationalized in a similar manner. Explicitly hating whites, while at some level understandable, is poor form. Negative feelings towards Jews are however entirely unprovoked manifestations of concentrated evil.