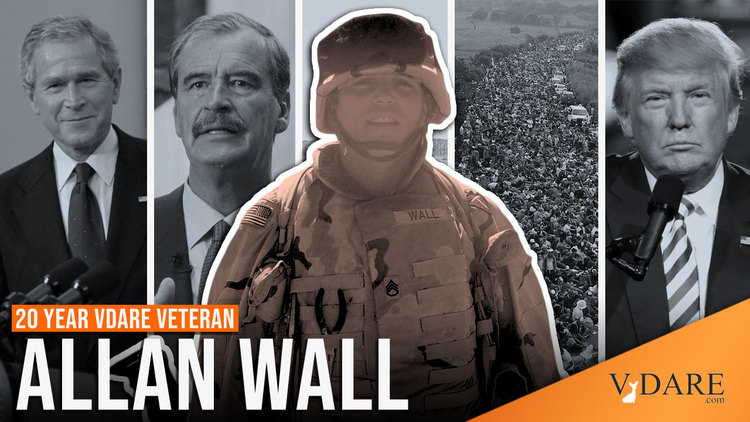 ALLAN WALL: 20 Years Of Writing For VDARE.Com On Immigration, The National Question, And Even—Wait For It—The TITANIC!

The 20th anniversary of my first article for VDARE.COM—May 30, 2001!—has prompted me to revisit my archive. It brought home how we immigration patriots have been forced to fight the same battles over and over again. Today, the situation looks worse than ever—but, as Editor Peter Brimelow says, miracles happen quite often in politics. We already had one miracle, the 2016 election of President Donald J. Trump, even though the new administration is reversing Trump's accomplishments.  But it’s undeniable that the ideas we’ve been discussing on VDARE.com are finally entering public debate—witness Tucker Carlson’s recent embrace of an immigration moratorium.

Since I moved back to my home in the U.S., I’ve been writing “Memo from Middle America,” an occasional “Memo from Mexico” when I’m visiting Mexico, and “Said in Spanish” when I translate and discuss Spanish-language news.

My first published piece on VDARE.com was a letter that described my failed attempt to drive into the ranch of then-President Vicente Fox. These were the heady days of the presidencies of Fox and George “Dubya” Bush. Fox was “pro-American,” we were told, so we had to do whatever he said and open the border. Then Hispanics would flock to the Republican party. My first VDARE.COM article, Why The Majority Of Mexican Immigrants Are Not Going To Vote For The GOP, disputed that view.

That’s not to say the GOP can’t increase its share of the Hispanic vote, marginally. It can, as Trump did in 2020. But pandering is not the way, as I wrote:

Republicans should continue to appeal for the votes of citizens of Mexican ancestry—but by appealing to them as Americans, and not as Mexican-Americans.

To a considerable extent, that’s what Trump did.

Living in Mexico was an eye-opener that taught me how Mexicans viewed immigration: THE EDUCATION OF A GRINGO IN MEXICO, Or How Living in Mexico Helped Transform Me Into A VDARE.COM Contributor.

We’re often told that Mexicans and other Latin Americans come here for “freedom.” I didn’t get that impression. Mexicans expressed to me their desire to emigrate to the U.S., but I didn’t hear anyone say he was seeking “freedom,” or even say he wanted to become an American. News flash: They come for the money!

Certainly, Mexicans think U.S. citizenship for themselves or their children is desirable, but not, despite what the naturalization oath states, because they “absolutely and entirely renounce and abjure all allegiance and fidelity to any foreign prince, potentate, state, or sovereignty, of whom or which I have heretofore been a subject or citizen.”

Indeed, in the 1990s, the Mexican government changed its citizenship laws to enable Mexicans to be dual citizens of both countries, so they could meddle in U.S. politics and public policy. That’s relevant to our insane Anchor Baby policy, in which the child of a non-citizen, even an illegal alien, born on U.S. soil is magically an American citizen. Mexico’s law  claims jurisdiction over, and the loyalty of, every Mexican born here. Mexican birth certificates are available in Mexican consulates.

In Mexico, Mexicans and Americans of Mexican ancestry are seen as essentially Mexican, regardless of other citizenships, and as tools for advancing Mexican interests north of the border. In other words, meddling. For years, Mexico has meddled in American politics.  But in contrast to the hysteria about Russian “collusion” in the 2016 election, nobody seems to care about Mexican meddling. Maybe the Leftists who were so hysterical secretly don’t see Mexico as a serious country.

In fact, of course, Mexico is a very serious country, with serious policies to advance those interests, and it is better-suited to meddle here than just about any other country.

Mexican meddling is open, and done proudly, and no one does anything to stop it. For instance, during the 2016 campaign, Mexico openly registered Mexicans to naturalize them quickly so they could vote against Trump. The response from Leftists and the MSM—and the GOP? Crickets.

Maybe someday America will have a patriot leadership that will pay attention.

What of Mexico’s immigration laws and policies? Unlike ours, they’re set up to protect Mexican sovereignty. That, of course, has not stopped Mexico from permitting hundreds of thousands of Central Americans to cross its territory to get to our southwest border. But that finally became an issue when Trump pressured Mexico to crack down on those “migrants.” And he cut a deal with Mexico that helped us a lot.  Now, under Biden, that and other deals have been undone.

Note too that Trump had an unexpectedly good relationship with Mexican President Andres Manuel Lopez Obrador, who provided a respite from Mexican meddling, at least from the presidential level. Now under Biden, that has reversed too.

Another of my concerns: the growing use of Spanish as a semi-official language. (And my family is bilingual!)  Spanish and the New Conquistadors, which I wrote in 2002, attracted the attention of Robert MacNeil and landed me a cameo role in his documentary, which aired on PBS.

A major problem with creeping bilingualism is politicians who say one thing in English and another in Spanish.  Two articles about Texas gubernatorial races explored that problem:

Candidates lie, dissemble, and obfuscate quite enough in English. Why add Spanish?

A related topic: the use of surnames, which differs greatly in Spanish culture and even more so in the Arabic culture. How Hispanics and Arabs use surnames would complicate any future Amnesty in which the applicants are supposedly vetted.

Yet another subject I’ve discussed is ballot security and voter identification. Mexico’s Voter ID system is simply better than ours, an important fact given what occurred on November 3.

Looking over my archive, I don’t see how anyone reading it in good faith could conclude that I’m anti-Mexican because I oppose mass immigration. Far from it. I love Mexico. My wife is Mexican. I’m sorry to see the extreme violence there perpetrated by the drug cartels.

Thus I’ve also written about the negative effects of mass immigration on Mexico:

In that respect, in recent years, we’ve witnessed the horrible phenomenon of “unaccompanied minors” of Central American children dragged all the way across Mexico. It’s a humanitarian disaster. The elites of Mexico and other Latin American countries have a lot to answer for.

For years, they have cynically used the U.S. as a safety valve, a human dumping ground, rather than solve problems that cause emigration.

And, of course, despite the MSM’s ignoring it, a racial factor is at work in the mass migration. Mexico is racially stratified.

Generally, the elites are white, and the farther one goes down the socioeconomic ladder, the darker the people are. Other Latin American countries have similar demographics. When we import millions of Latin Americans, we’re importing their racial problems as well.

As for whether American Christians must oppose strict immigration control, as the Soros Evangelicals demand, I’m a Christian myself, and I don’t agree.

Aside from immigration, I’ve had the opportunity to write about history:

Regarding America’s vandalized statues and monuments, I wrote a travelogue about America’s Southern heritage. (And I’m a kinsman  of James Dunlavy, the Union cavalryman who captured Confederate General John S. Marmaduke!)

I was honored to write this tribute to my fellow Oklahoman, the late VDARE.COM writer and patriot Comanche David Yeagley.

I’ve also made my case for Puerto Rican independence, which was posted to the website of El Nuevo Día, Puerto Rico´s most widely read newspaper and led to dialogue with Puerto Ricans of various persuasions.

Thanks to Peter Brimelow for publishing me all these years. And thanks to the rest of the VDARE.COM family and team, including Lydia Brimelow, Paul Nachman and the indefatigable James Fulford, with whom I’ve communicated at such odd hours of the day and night. Do you ever sleep, James?

Thanks also to all my readers and correspondents.

Our situation today is certainly grim. Not only are Trump’s immigration accomplishments being reversed, but Americans are losing their freedom of speech, as the Deep State and the Regime Media intensify their repression of the people whose ancestors built the country. Even greater troubles might lie ahead.

But as long as VDARE.COM has a voice, there is hope for the Historic American Nation.

VDARE.com’s work isn’t just important. It’s vital to the survival of our country. To donate and help the cause of immigration patriotism, click here.